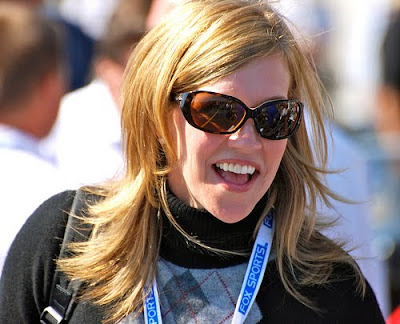 Update #1: Brian France will appear on SPEED's Race Hub with Steve Byrnes via liveshot from Texas Motor Speedway in the 7PM ET hour.

Update #2: Richard Petty and the new driver of the #9 Stanley Tools Dodge Marcos Ambros will be on NASCAR Now with Mike Massaro at 5PM ET today.

It's a big day of press conferences on Tuesday. Richard Childress Racing is up first at 10AM from the shop and then again at noon ET on the official NASCAR weekly news teleconference. Expected news is that Budweiser is joining RCR as a sponsor, reportedly on the #29 car with Kevin Harvick as the driver. Updated: Click here for the NASCAR.com link to online streaming for this event.

Richard Petty Motorsports has called a press conference for 1PM to announce a new driver and sponsor combination for 2011. Odds are Marcos Ambrose is the driver, but the sponsor is still TBA. No online streaming for this event at the present time.

The third media event of the day will be streamed live at SPEED.com with good reason. They always do things bigger in Texas. Here is the media release info:

TMS officials announced Thursday that a press conference and a 2011 Schedule Party will be held on Tuesday at the House of Blues in Dallas. The announcement will take place in the Foundation Room at 8 p.m. A reception will be held beginning at 6 p.m.

This one should be fun to watch, with the expected news that TMS will keep two Sprint Cup Series dates and one will be a night race. We will update streaming details during the day on Tuesday.

Jim Utter from thatsracin.com reports that Red Bull driver Brian Vickers will give an update on his medical issues this weekend in Bristol, TN. SPEED will be on the air most of Friday with activity from the track, so that would probably be the best place for a TV update.

Trackside on SPEED has a new host this week since Steve Byrnes has moved to the studio to host Race Hub. Krista Voda will handle those duties in Bristol, but a permanent host has not yet been announced.

Although Darrell Waltrip has said he will be in Bristol, he is not currently on the list of folks working for SPEED. Elliott Sadler returns on Trackside and Kyle Petty and Kenny Wallace will handle RaceDay.

Camping World Truck Series announcer Rick Allen also gets an opportunity to step into a new role with the absence of Byrnes at the track. Allen will move into the Nationwide and Sprint Cup Series as he calls various practice and qualifying sessions on Friday. SPEED will not confirm that Allen will fill this role for the rest of the season.

Over on ESPN Ray Evernham joins Allen Bestwick, Brad Daugherty and Rusty Wallace in the Infield Pit Studio for the Bristol telecasts this weekend. Evernham passed along that he will also be at Richmond, Loudon, Charlotte, Talladega, Phoenix and Homestead.

This week, the daily shows are a bit different. Race Hub has Kurt Busch in studio on Tuesday, is preempted by live racing on Wednesday and then has Richard Petty as a Thursday guest.

NASCAR Now will be hosted by Mike Massaro this week at 5PM on Tuesday, 6PM on Wednesday and 5PM on Thursday. No show Friday due to live racing. Also due to the Saturday night race, the weekend wrap-up edition will air at 10AM on Sunday.

Finally, lots of folks have been asking about the Knoxville Nationals Sprint Car race last weekend. It was not live due to a promoter issue, but SPEED will air an edited version of the race three times. Saturday, August 28 at 4:30PM, Friday, September 3 at 3PM and Saturday, September 11 at 9PM are the air dates.

We will update this post during the day on Tuesday. In the meantime please feel free to add your comments on any of the topics mentioned above. To add your opinion, just click on the comments button below. This is a family-friendly website, please keep that in mind when posting. Thanks for taking the time to stop by.
Posted by Daly Planet Editor at 9:00 PM 34 comments:

Your Turn: Sprint Cup Series From Michigan On ESPN 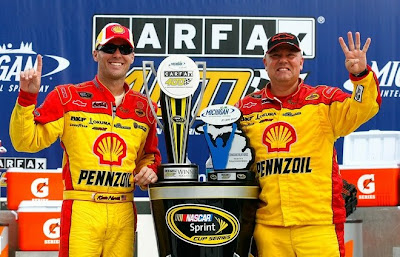 The high banks of Michigan served ESPN quite well on Sunday afternoon. Allen Bestwick started the day with the NASCAR Countdown show. Rusty Wallace and Brad Daugherty were alongside. This was a one hour program.

This time of year, the challenge for ESPN is to mix stories about making The Chase with the stories of winning the race. That challenge was again on display in the pre-race show. Strangely, Dave Burns narrated a poem that was set to NASCAR video footage. Update: Now being told the narrator was ESPN feature reporter Chris Connelly.

Marty Reid, Dale Jarrett and Andy Petree handled the call of the race from the TV booth. Reid kept his excited tone while continuing to come up to speed with the teams and personalities in the sport. Petree was much more vocal than in the past while Jarrett continued to be the statesman for the sport.

On pit road was Dr. Jerry Punch, Vince Welch, Mike Massaro and Dave Burns. The pit reporters were key to this telecast and were very busy. This big track needs effective updates from the reporters assigned to the various teams.

ESPN recovered from a terrible Nationwide Series telecast on Sunday with a big change in approach to the race coverage. Wider shots and many split-screens put a lot more of the racing on the screen and eliminated the single shots of cars and long periods of simply following the leader.

Both Reid and Bestwick continue to push the agenda of continued excitement and pumping up the stories of the actual race. Coverage included a ton of focus on the Chase early, but that faded among the actual racing and the stories unfolding on and off the track.

ESPN made good pictures and had no technical problems. In-car cameras worked great, but once again burned the director as key passes from the in-car perspective just make bad TV. As usual, replays from in-car angles are great.

This was a very different presentation of NASCAR on ESPN. We want to know what you thought of this coverage. Please take a moment to leave us a race wrap-up comment focusing on the TV coverage. This is a family-friendly website, please keep that in mind when posting. Thanks for stopping by The Daly Planet.
Posted by Daly Planet Editor at 8:00 PM 47 comments: