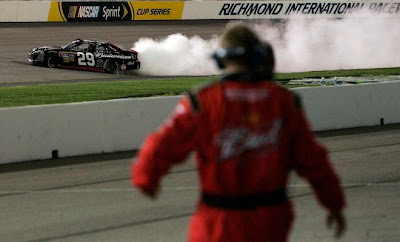 It was a wild night in Richmond. From start to finish, the stories were almost unbelievable at times. It was up to the NASCAR on ESPN team to cover them for ABC.

Nicole Briscoe hosted a pre-race show that did not air in areas where the ABC local stations chose news or local programming. Brad Daugherty and Rusty Wallace manned the Infield Pit Studio with Briscoe. The pre-race show was themed around the Chase.

Richmond International Raceway did a great job of putting together a 9/11 tribute. Unfortunately, things did not turn out as planned once the race started. An accident during the tribute on laps 9-11 made things a bit awkward.

Allen Bestwick led Dale Jarrett and Andy Petree through a race telecast that featured an incredible number of cautions and incidents in the early going. At times, it seemed that the TV team was overwhelmed by just how many top teams were involved.

Jamie Little, Dr. Jerry Punch, Dave Burns and Vince Welch were on pit road. The information was flowing fast and furious, but often it was not perhaps what was being reported by other media members or teams via social media. Once again, ESPN was caught in a bit of an information gap.

The coverage for the last several years has emphasized the tight shots of two cars at a time as they race for position. This race, even on a short track, featured the same. Gone were the wideshots and the aerial views. The perspective on each segment of racing being shown was quickly lost.

ABC kept in all the scoring tickers as if it was an ESPN telecast. At times, there were four lines of graphics on the screen. It was interesting to see just how much of a focus on other sports the network kept during the race telecast.

The closing lap featured the winner, but again the director chose to cut away to a shot of the winning driver's wife. None of the other races to the flag were covered. In this event, there were many stories other than the winner. It was Chase time.

Once the race was over and went to commercial, many ABC stations across the country chose to leave and begin their local news telecast. My home station in West Palm Beach, FL was one of them. As if nothing happened, the local news just began.

This meant that fans who had watched the telecast for four hours were denied any post-race coverage of the final race to set the Chase. It was a huge mistake. ESPN does not control the ABC local stations and tonight was a great example of that issue. It might be time to move the night races over to cable for 2012.

The RIR team offered a one-hour version of NASCAR Now at midnight ET. That helped to ease the pain for those of us who saw none of the live post-race show.

What did you think of the ESPN on ABC coverage of the Sprint Cup Series race from Richmond, VA?

To add your TV-related opinion, just click on the comments button below. Thanks for taking the time to stop by The Daly Planet.