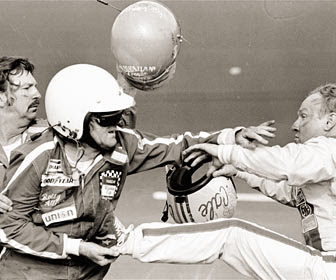 After the first week of NASCAR TV in 2008, things continue on Monday with a doubleheader.

ESPN Classic is first-up with its continuing series of Daytona 500 highlight programs. This Monday's offering is truly a classic, and NASCAR fans should make sure to try and record this 2PM Eastern Time offering that runs for two hours.

The 1979 Daytona 500 was the first time this race had been televised live from start-to-finish. As our old friend Ken Squier would say, flag-to-flag coverage. On this day, much of the East Coast was kept inside because of a big snowstorm.

With most households still without cable TV, viewers found that they had a live sporting event from Florida on network TV that looked like a lot of fun. Little did they know this one race would change NASCAR forever.

CBS Sports had just unveiled a new TV gizmo they called an "in-car camera." This "driver's perspective" completely changed the experience of watching high-speed stock car racing for the viewer. The network also used low-level cameras for "speed shots." That is where the camera stays still, and the cars zoom past in a big bunch. After all these years, it is still a fan favorite.

After early problems in the race, Cale Yarborough made his way back through the field to find himself battling for the win on the final lap. His attempt to pass Donnie Allison resulted in Allison forcing him into the infield, which caused his car to spin.

Ultimately, Yarborough collected Allison and they spun into the infield near Turn 3. This handed the race to Richard Petty. Normally, this would have been the end of the show, but before the snowbound New Englanders could turn the channel, Ken Squier said those now famous words.

"There is a fight on the backstretch!" screamed Squier. Donnie's brother Bobby, also in the race, had stopped his car at the accident scene. Cale thought Bobby had blocked him in the final laps, Donnie thought Cale had wrecked him and Bobby to this day still says he only stopped "to give his brother a ride back to the pits."

Needless to say, the resulting discussion between those three parties did not result in an agreement. As the picture above documents, what fans nationwide saw was a good old post-race stock car brawl.

For veteran stock car fans of that era, a fight after a race was just part of the regular entertainment. But, for the New Englanders glued to their TV's, it was absolutely amazing. Remember, this was the first Daytona 500 televised nationwide from start-to-finish.

On Monday morning, NASCAR found itself as the headline of the New York Times Sports Section. The combination of snow, great TV production and amateur fisticuffs had put NASCAR front-and-center in the national media. "The fight" was talked about for weeks at water coolers across the country.

Monday is a rare opportunity for new fans to look back and enjoy truly classic racing TV production. This outstanding series continues for the next four Mondays on ESPN Classic at 2PM Eastern leading up to the Daytona 500 weekend.

Over at SPEED, the pre-season testing shows continue on Monday at 6:30PM with John Roberts hosting coverage of the second group of Sprint Cup teams at Daytona. Roberts is joined by Jeff Hammond, Larry McReynolds and Bob Dillner for these programs.

The network has stepped-up coverage, and had a very good first week of shows. Roberts anchors from the Daytona Infield TV studio, and Dillner has been able to get very open and honest comments from many drivers and crew chiefs about this new season.

So, Monday should be a good day for one historic race on ESPN Classic, and one up-to-the-minute Sprint Cup testing show from SPEED. Remember, the SPEED testing shows this week are at 6:30PM because of "the auction." I have no further comment on that topic.

Feel free to give us your comments about both shows, but please do not add more "I do not have ESPN Classic" comments to the page. Just like many other networks, ESPN is struggling to grow this network on a national basis. Direct your frustration to your cable company about this problem with email that includes what you wanted to watch on ESPN Classic.

For over a year now, I have been advocating that one big way to get cable companies to provide ESPN Classic is to include regular NASCAR programming. Let's hope ESPN responds.

On this post, please tell us what you thought of the programs, and if you are interested in more historic NASCAR programming being shown on the ESPN Networks.

To add your comment, simply click on the COMMENTS button below and follow the simple instructions. There is nothing to join, and we do not require your email address. We just want to know what you think of these NASCAR TV programs.
Posted by Daly Planet Editor at 1:59 PM 24 comments:

Chris Hawkey from FAN Motorsports was kind enough to invite me over this Saturday for an interview which covered a lot of topics. To listen, click this link and then select FAN ON DEMAND and then MOTORSPORTS ON DEMAND.

Our interview is the top selection, just click on LISTEN. Thanks again to Chris and Jordan for the interview, and to Daly Planet reader Susie for setting it up.

To contact us for radio and Internet interviews, email editor@thedalyplanet.tv anytime. Thanks.
Posted by Daly Planet Editor at 10:34 AM 12 comments: 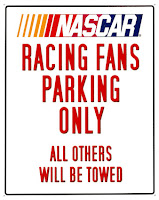 For easy access, just click on the title of The Daly Planet column you would like to read and you will be taken there directly. Here are some recent columns that resulted in outstanding reader comments:

Darrell Waltrip "Gives Us The Business"

The NASCAR TV Story That Refuses To Die

All of the columns above are still open for your comments, and we thank you for taking the time this weekend to stop by The Daly Planet and leave your opinion.
Posted by Daly Planet Editor at 9:51 AM