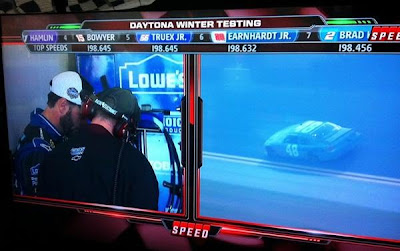 It was one of the strangest testing sessions in history at Daytona. Usually a relaxed and rather boring affair, this time NASCAR was actively changing the rules as they frantically tried to break-up the two car tandem racing seen last season on the restrictor plate tracks.

The last day featured this TV screen shot of Jimmie Johnson in the Sprint Cup Series garage watching Dale Earnhardt Jr. take his Lowes Chevy out for a spin. Junior had been involved in an on-track incident with Jeff Burton and Juan Montoya a bit earlier.

Aside from the total confirmation that NASCAR hates the two-car tango, the other theme of the testing was the complete and total penetration of social media into the sport. The flood of information from the teams, NASCAR and the drivers themselves directly to the fans was nothing short of amazing.

Drivers sit in their cars while the crews make change after change during testing. Normally, boredom and idle radio chatter are the order of the day. All that has changed with smart phones. Now Twitter, Facebook and texting are the preferred pastimes.

It was Carl Edwards who showed SPEED viewers the cell phone video he took of himself taking a lap around Daytona. He took it from the driver's seat...while driving. It was Jimmie Johnson who showed the SPEED cameras the velcro pouch inside the driver's door where he kept his cell phone with him as he hit the track.

While NASCAR talk on Twitter was a mix of cautious users and curious fans last year at this time, this specific form of social media has quickly become the most vital line of communication within the sport. Three days of testing at Daytona confirmed it.

While the drivers were fun and their comments on everything from drafting to the lunch menu made for entertaining reading, it was the use of Twitter by SPEED that stole the show. Finally, a TV network made a concerted effort at breaking down the final barriers between the viewers and the on-camera personalities involved in the programs.

The early testing sessions were streamed online at SPEED.com and the afternoon activity was shown on the SPEED TV cable network. While these two very different media platforms resulted in different viewing experiences, the one constant in them both was the seamless integration of direct viewer interaction.

From the start, SPEED made it clear that NASCAR fans would be a vital part of every form of the coverage. In addition to integrating fan tweets into the coverage from the analysts in the TV booth, the reporters in the garage worked tirelessly to answer questions and get information directly for fans on Twitter.

The result was an interactive frenzy of questions, suggestions and comments never seen before in any kind of NASCAR telecast or Internet webcast. It created a river of information that flowed simultaneously with the live program.

We have all been partially taken by surprise that the very diverse personalities in the sport have almost all taken a liking to this simple 140 character text-based free service that also lets users link pictures, videos and website pages.

While the SPEED experience at testing was a welcome one, the reality of both ESPN and FOX while in Daytona will no doubt be a sharp change of direction. FOX is a broadcast network and the NASCAR on FOX coverage has long since been designed in many ways to serve the broadest general audience, including the infamous "casual fan."

ESPN is knee-deep in social media guidelines and the network has been slow to integrate any type of Twitter interaction in the telecasts. Last season, one freelance ESPN technician had been tweeting informative pictures and interacting with fans. She provided an informal social media documentary of each ESPN effort at the Nationwide Series races.

From her perch in the TV booth during the race, she continued to interact with fans and offer a unique perspective. At no time did her social media activity interfere with her job. In fact, she often worked to solve issues associated with the telecasts for the fans.

"Social Media Smackdown" was the TDP column that resulted as ESPN subsequently banned any of the TV crew from using Twitter or any form of social media during the races. When the season was over, she was immediately fired.

Unfortunately ESPN shot themselves in the foot again as that crew member was a well-respected TV veteran and had attended many tweet-ups at the track with fans. She had probably done more to directly interact with the fans than anyone on the entire NASCAR on ESPN team. No doubt she will be missed by many this year when Daytona's Nationwide Series race on ESPN comes along.

SPEED will return to Daytona in February to handle various practices, qualifying and races including the twin qualifiers for the Sprint Cup Series. Hopefully, the positive social media experience the network had at the track for these three days of testing will provide a solid foundation for continuing this level of fan interaction.

Kudos to the TV crew, the NASCAR personalities and the fans who took the time to participate in this amazing experiment and set the new tone for 2012. This is truly going to be the year of the fan in the sport and social media is going to drive this point home. Get on the Twitter bus now folks, it's going to be a fun ride.