Time For ESPN To Make The Donuts 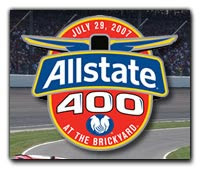 There has rarely been a week like this for ESPN. The normal stick-and-ball sports that dominate ESPN on a daily basis are about to be "one-upped" by what many in Bristol, CT believe is not a sport at all.

After more than five years, the top level of NASCAR racing returns to ESPN. While the network may believe it is more important than many things, there is absolutely no doubt that ESPN is dwarfed by NASCAR racing.

This sport has flourished in its time away from the network, and this success will be the "measuring stick" by which NASCAR fans will judge ESPN's efforts for the next four months.

Simply put, its time for ESPN to make the donuts. Six months of hard work, practice and rehearsals behind-the-scenes have set the stage for one key day in the history of this network. Make no mistake, Sunday is huge for the entire ESPN/ABC/Disney corporation.

While ESPN is confident in College Gameday, confident in Monday Night Football, and very confident in SportsCenter, the entire network is about to be put under a level of scrutiny that many at the company have never experienced before.

NASCAR racing was ill-served by NBC Sports. This group of arrogant New Yorkers made it clear from the start that NASCAR was a "fill-in" for their loss of the NFL, and they would be exiting from NASCAR "as soon as possible." That was told to me in-person back at their first race in Homestead. These were not racing guys.

NBC paid the same level of service to NASCAR that TNT recently did in their disastrous and self-serving "summer replacement" tour. That my friends, was lip service. NBC fled back to Manhattan as soon as possible and the sport is better-off without them. TNT's website has eliminated all mention of NASCAR, and on the Turner-owned NASCAR.com site, the TNT page sits...frozen in time.

Now, ESPN steps-in with a full six months of solid Busch Series action under their belts. They move from the relative obscurity of Saturdays to the white hot spotlight of NEXTEL Cup at a key time in the history of the sport.

Fans have high hopes for the continued good chemistry of Dr. Jerry Punch, Rusty Wallace, and Andy Petree. The pit reporters have been just fine, with Allen Bestwick and Mike Massaro being the heavy-hitters in experience. ESPN's team calling the on-track action has a great opportunity to be very good this season. Like him or not, Rusty is always excited and gets across a vibe of energy that sometimes requires Petree to get things back on an even keel.

What fans dread most is ESPN doing to NASCAR what they have done to The Indy 500. These days, there is so much extraneous "TV junk" built around the race that it seems the on-track activity is actually a relief for the viewer.

From bad "TV hosts" to rock bands playing to awkward tear-jerking driver profiles, the network loses so much credibility that you somehow expect the play-by-play announcer to begin with an apology to race fans.

ESPN has already told us that for some unknown reason, Brent Musburger will be "the telecast host" at The Brickyard 400. They have already told us that NASCAR newcomer Suzy Kolber and the struggling Brad Daugherty will handle both the complete pre-race show and the in-race "Infield Studio" segments. Back in the Bristol, CT studio, they are continuing to use the "mis-cast" Erik Kuselias as ESPN's "daily national face of NASCAR."

This week, Kuselias has already done the Monday and Tuesday NASCAR Now shows. Aside from the credible news items from the non-Bristol based reporters, both shows were horrible. This gentleman is just lost.

Imagine asking Bobby Labonte how he would race his brother Terry at The Brickyard 400 if it came down to the "last couple of laps" for the win. As Kuselias would say, "are you kidding me?" These brothers are both multi-millionaires with twenty plus years each of NASCAR history under their belts. Just once this season, maybe some normally polite NASCAR driver will just answer back, "you're kind of a jerk, did you know that?"

Kuselias was once a lawyer from Hamden, CT who wanted to get into sports radio. Now he finds himself being handed the keys to the most high-profile NASCAR program on American television. While he has "skated" for six months amid the confusion and chaos of this program, he will skate no more after Monday, July 30th.

By that day, the network will have covered the Busch Race from ORP, and The Brickyard 400. NASCAR Now will instantly become the center of attention as the sole source of information about ESPN's own races. Fans will expect much more from this program than the single reporter "stringer" style coverage of NEXTEL Cup that the show has offered this far.

If "ESPN General Assignment" reporters David Amber or Wendy Nix appear simply to "wrap-up" the Brickyard 400 for Monday's NASCAR Now, heads should roll in Bristol. For the next four months, the faces on NASCAR Now should be ESPN's own "faces" at the track.

NASCAR Now has completely fumbled ESPN's coverage of the Busch Series this season, simply because they were mesmerized by NEXTEL Cup. As noted in earlier Daly Planet columns, they actually refused to run Busch highlights on Mondays because the race was "back on Saturday." Veteran race fans had to be helped-up from the floor after seeing this naive approach to racing.

So, this week ESPN will air sixty-six hours of NASCAR, comprised mostly of the excellent Ultimate NASCAR series. Then, the Busch race at ORP will serve as the warm-up for the big day. The main course will be served with Sunday morning's NASCAR Now, then the NASCAR Countdown pre-race show and finally The Brickyard 400.

From Fox Sports to TNT, the NASCAR NEXTEL Cup TV package has seen its highs and lows this season. Now, ESPN takes the helm to steer this ship all the way into port in November. As we build toward the weekend, there will no doubt be more information to discuss, and more opinions to read.

Please feel free to add your opinion of ESPN's coverage to The Daly Planet anytime. There will be a new column available for your comments every day through November. It should be interesting.

The Daly Planet welcomes comments from readers. Simply click on the COMMENTS button below, or email editor@thedalyplanet.tv if you wish not to be published. Rules for comments are posted on the right-hand side of the homepage. Thanks again for stopping by.
Posted by Daly Planet Editor at 9:38 PM 15 comments: