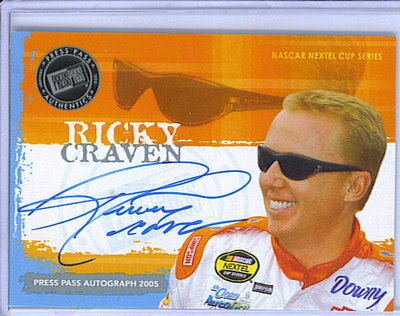 Saturday afternoon brings a Nationwide Series race to ESPN. The series is in Nashville, TN as part of a doubleheader weekend also featuring the Camping World Truck Series. The truck race took place on Friday night.

Allen Bestwick will kick-off the coverage with the NASCAR Countdown pre-race show from the Infield Pit Studio at 3:30PM ET. Joining Bestwick will be Dale Jarrett and Brad Daugherty. Rusty Wallace has the weekend off.

Jarrett will them move up to the broadcast booth. Marty Reid will be calling the race and with Andy Petree also off this weekend it will be Ricky Craven moving to the analyst position for the first time. The team on pit road will be Dr. Jerry Punch, Vince Welch, Jamie Little and Dave Burns.

Reid has brought a new energy to the ESPN presentations. Jarrett has come alive and having Craven in the booth should bring yet another new wrinkle. Friday, the truck race quickly transformed into the high dollar teams pulling away from the mom and pop teams. It wound up being a boring affair.

Over the last two years, the Nationwide Series has also been a case of two different groups. The "regulars" slug it out trying to make a living while the teams connected with Sprint Cup Series owners or drivers run up front and rule the day.

Nashville has the potential to allow ESPN to tell the full story of the race or once again just concentrate on the Sprint Cup Series drivers who are "stepping down" to play in the Nationwide ranks.

This is a fast track and rain early on Saturday has washed most of the rubber off from the track surface. Weather may also play a part in the race itself. Either way, the Nationwide Series gets the spotlight on this weekend.

This post will serve to host your comments on the Nationwide Series coverage on ESPN. To add your TV-related opinion just click on the comments button below. This is a family-friendly website, please keep that in mind when posting. Thanks for taking the time to drop by The Daly Planet.
Posted by Daly Planet Editor at 1:00 PM 273 comments: