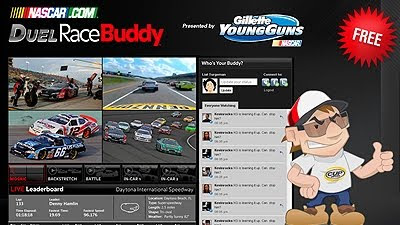 With only one race to go in the Sprint Cup Series for 2010, the championship has yet to be decided. It's a great scenario for a sport that has been taking some hits in popularity this season.

Behind the scenes there is another big issue that is a long way from being settled. Moments after the Sunday race from Phoenix began, there suddenly appeared a new option on the NASCAR.com website. It was a link that simply said "Watch Live."

A simple click of the mouse produced a streaming version of the live ESPN telecast. Without any fee, without any sign-up and without any fanfare the next to last Sprint Cup Series race of 2010 was available to Internet users worldwide.

To understand what is going on, two terms need to be discussed. The first is called convergence. Most of us deal with this every day, even though we might not understand how significant of an issue it is where NASCAR is concerned.

Convergence simply means that different machines can now deliver the same end product. In this case, the television and computer both provided the live ESPN signal of the PIR race. Many folks have smart phones that can provide Internet, email and social media access in a snap. Convergence is all around us.

The second term is "cord cutting." This is the revolution underway to disconnect from cable TV service and access the same content online. In 2010, the number of cable customers opting to end TV service has shaken the major system operators (MSO's) and forced cable TV networks to explore new options for distribution.

"Cord cutting" is thought to be driven by two factors. First, the recent economic downturn has forced a new set of priorities on many families and expensive cable TV service is just not a financial option. Second, the younger generation has been brought up in the land of convergence and has little patience for any video content that is not available on demand through any device.

Most major professional sports have addressed convergence by creating a multi-platform distribution package for live events. Cable TV, home satellite TV, cell phone and Internet streaming is coordinated well in advance and sold or provided as a package.

Needless to say, NASCAR is a sport that screams for Internet distribution. Fridays, Saturdays and Sundays are filled with all kinds of NASCAR-themed live TV programming provided by the sport's four key television partners ten months of the year.

ESPN holds the over-the-air and cable TV rights to the Chase races, but Turner Sports holds the online rights. As long as ESPN does not make it's own NASCAR coverage available online, Turner cannot stream the races at the NASCAR.com website it operates and undercut the sport's biggest and most valuable TV partner. It's been this way since 2007.

The moment that the Phoenix race started on ESPN for TWC's online customers, Turner was essentially free to offer streaming as the Internet rights holder for NASCAR content. Once ESPN pushed the first online domino, the rest very quietly began to fall.

At this time, ESPN continues to provide TWC customers with an online network feed. In fact, to further address "cord cutting" issues ESPN is planning to offer paying customers expanded online and even cell phone access to multiple ESPN networks.

ESPN's actions suggest that the Homestead race should be available online through NASCAR.com in much the same manner as the Phoenix event. Hedge that bet with the fact that ESPN must leave the online door open in order for NASCAR.com to walk through.

It seems ironic that with little fanfare and no promotion a small number of hardcore NASCAR fans in the know may wind-up watching the first Sprint Cup Series season finale streamed online in the history of the sport. In a way, it's a microcosm of the season. Something so right that is being handled so incredibly wrong.

We invite you to comment on this topic. To add your opinion, just click on the comments button below. This is a family-friendly website, please keep that in mind when posting. Thank you for taking the time to stop by The Daly Planet.