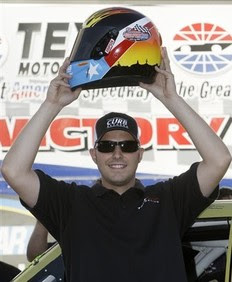 It is a big night for the Camping World trucks. All alone on national TV, the small group of truck series regulars will be mixed with one-timers and several field fillers. Krista Voda begins the TV coverage at 8:30PM on SPEED.

It will be Johnny Sauter on the pole with a speed of 179 mph. Bringing up the rear of the field will be the Blue Ox Chevy of driver Nick Tucker. The speed of his qualifying effort was 150 mph. Among the 33 trucks in the field, there is a speed disparity of 29 mph.

Michael Waltrip will not be involved in this telecast due to his Sprint Cup Series activity in Pocono. Rick Allen will take the pre-race hand-off from Voda and try to get some excitement back into this series after a tough weekend in Dover.

Phil Parsons will again be on center-stage, as he was prior to Waltrip joining the CWTS telecasts. Parsons is the dean of the truck series announcers and should be on his game from start-to-finish.

The trucks have put on great races at TMS and there is no reason to believe that without Kyle Busch and some other Cup drivers the excitement level will fade.

If SPEED returns to the TV fundamentals that made this series a hit, it might be a very big night for NASCAR. With the Friday activity in Pocono rained-out and ESPN making a mockery of the Nationwide practice coverage, the window is wide-open for SPEED to grab the night.

With the CWTS telecasts, it is important to remember what is excluded rather than included. No infield pit center, Hollywood Hotel or tech garage. No cutaway truck or four pit reporters. No Draft Tracker, animations or in-race movie trailers.

This is NASCAR TV the old-fashioned way. Two announcers in the booth, two reporters on pit road and one announcer hosting the pre-race show by standing on the starting grid. If the drivers cooperate, it could be a night to remember.

This post will serve to host your comments about the Camping World Truck Series coverage from TMS on SPEED. To add your TV-related opinion, just click on the comments button below. This is a family-friendly website, please keep that in mind when posting. Thanks again for taking the time to stop by.
Posted by Daly Planet Editor at 7:42 PM 173 comments:

Friday TV: All Three NASCAR Series On The Air 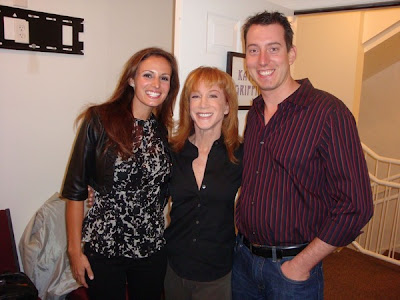 Kyle Busch and his girlfriend recently took in a Kathy Griffin performance on their days off, but now it is back to work for drivers in all three of NASCAR's top series.

Steve Byrnes steps-in and takes over the Mike Joy position hosting Sprint Cup Series practice as SPEED starts Friday off at noon ET from Pocono. Byrnes gets this role throughout the TNT portion of the Sprint Cup Series schedule.

After thirty minutes of news and interviews hosted by John Roberts at 3PM, NASCAR Live gives way to Sprint Cup qualifying. Byrnes hosts again with Larry McReynolds and Jeff Hammond in the booth. Lindsay Czarniak is back on pit road reporting for this session with Marty Snider.

Jerry Punch leads ESPN2 through one hour of Nationwide Series practice from Nashville, TN at 6PM. Dale Jarrett is off this week, so Rusty Wallace will be alongside of Punch and Andy Petree.

Live action returns at 8:30PM with the Camping World Trucks from the Texas Motor Speedway on SPEED. TDP will have a live blog of that race.

This post will serve to host your comments about the daytime NASCAR TV coverage on both ESPN2 and SPEED. To add your TV-related comment, just click on the comments button below. This is a family-friendly website, so please keep that in mind when posting. Thanks for taking the time to stop by.
Posted by Daly Planet Editor at 12:01 PM 20 comments: