What If The Truck Race Rules The Weekend TV? 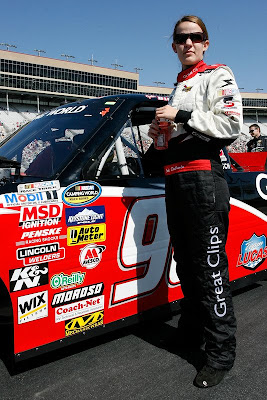 All the media hype is squarely on Talladega this weekend as the ARCA/REMAX, Nationwide and Sprint Cup Series race at the superspeedway. But, tucked away on the Saturday afternoon TV schedule is another event that might merit your attention.

The Camping World Truck Series is at Kansas Speedway for a race that will take to the air at 5:30 PM ET on SPEED. With the current economic woes, the CWTS is a rag-tag bunch of teams trying to scrape their way through the season. Some teams have fallen by the wayside, but others are continuing with the old racing spirit of operating on a shoestring.

SPEED has been the TV partner of the CWTS for a long time now and the telecasts of the series have developed almost a cult following. Many elements of the TV coverage are unique, from the simple and straightforward pre-race show to the consistent promise to treat every team equally when it comes to TV exposure.

The CWTS telecasts are stripped down and look a lot like the old-style NASCAR races that fans can stumble across on ESPN Classic or some of the regional sports networks. No gizmo's, no hype and no baloney. Just racing on TV.

Saturday in Kansas, the CWTS entry list is very interesting. The familiar faces like Johnny Benson, Todd Bodine and Ron Hornaday Jr. are there. But, from 57 year-old ARCA veteran Norm Benning to 23 year-old rookie female driver Gabi DiCarlo, the rest of the field is full of the very type of diversity that NASCAR has yet to accomplish elsewhere. Click here for a link to Jayski's Kansas race page.

By the time Sunday night at 10PM rolls around, there will have been over thirty hours of national TV programming originated from Talladega on four different television networks. Practice sessions, qualifying, news shows and preview programs will cover the weekend in-depth for the fans.

There will only be one telecast from Kansas of the truck race itself, no coverage of practice or qualifying. The race will come and go like a little blip on the NASCAR TV radar screen.

So, all of this begs the question. What if the TV coverage of the trucks in Kansas is better than either the Nationwide event on ABC or the Sprint Cup race on Fox?

Last week ESPN came to the table with a prepared script and followed Carl Edwards and Kyle Busch in the Nationwide race from start-to-finish. Click here for the TDP story about the coverage. The only problem was that once again racing reality interfered with the network's plans. Carl was eventually parked in the garage and Kyle got in all kinds of trouble. Neither TV hero won the race.

The NASCAR on Fox gang showed-up for the Sprint Cup telecast and were immediately buried in commercials and sponsorship elements from the pre-race show through the checkered flag. At times, it was almost comical in the amount of commercial elements the network tried in every way to force into the telecast. The result was a total on-air disaster and even lower TV ratings. Click here for the TDP column on that issue.

As SPEED returns to action with the trucks, it may well be a very interesting TV moment. The underfunded and bare-bones SPEED TV team will host their own pre-race show without a Hollywood Hotel or Infield Pit Center. Two announcers and two pit reporters will handle the commentary. No Tech Centers or cutaway cars will be in the coverage. There are no animated woodland creatures.

On this weekend with all three of NASCAR's national series in action, TDP readers have a great opportunity to compare the styles of ESPN, SPEED and Fox in producing NASCAR racing on TV.

There is also no doubt that somewhere at the headquarters of several NASCAR TV networks, interested executives will also be keeping an eye on exactly the same thing. What changes may result is anyone's guess.

Thank you for taking the time to stop by and read The Daly Planet.
Posted by Daly Planet Editor at 10:00 PM 19 comments: 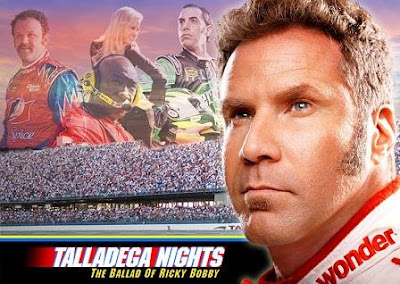 As usual during this time of the season, SPEED rules at Talladega on Friday with coverage of three different series. The network's schedule begins at 11:30AM ET with Nationwide Series qualifying and runs all the way to Trackside at 7:30PM. The full Friday schedule is posted on the right side of the TDP main page.

Here are some things to look for on Friday. Hermie Sadler continues to have a strong presence working on the Nationwide Series coverage with Jeff Hammond. The Fox crew of Mike Joy, Darrell Waltrip and Larry McReynolds will handle all the on-track Sprint Cup Series action. SPEED's Camping World Truck Series announcers Rick Allen and Phil Parsons will call the ARCA/ReMax Series race.

Jeff Gordon, Kevin Harvick and Michael Waltrip will join the Trackside gang and that could result in some very interesting conversation. None of those three is shy about expressing opinions, including Gordon. Keep an eye on that show.

This post will serve to host your comments about the Friday TV coverage on SPEED from Talladega. To add your TV-related comment, just click on the comments button below. This is a family-friendly website, please keep that in mind when posting.

Thank you for taking the time to stop by The Daly Planet.
Posted by Daly Planet Editor at 5:30 AM 45 comments: 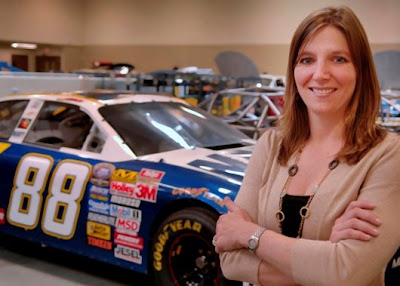 Anyone seen those missing NASCAR wives? Click here for the link to the TDP story back on January 6th talking about the new program series being produced for the TLC cable network. The working title for the series was NASCAR Wives.

Promoted as a behind-the-scenes look into the reality of being part of a racing family, the premise of the series sounded promising. Adding into this docusoap the names Kelley Earnhardt, Delana Harvick, Shana Mayfield, and Angie Skinner just made it that much more appealing. Where reality TV was concerned, this had all the makings of a winner.

Well, it is the last week of April and searching the TLC website for information about the show has been just what many fans have been doing. The results are less than promising. The only mention of NASCAR Wives is an old schedule page that shows the series beginning in late April. There is no video clip, no airdates and no updates on the episodes.

It seems that NASCAR Wives has joined NASCAR Confidential, Beyond the Wheel and 7 Days as more quality TV programming with no place to go. Veteran fans can click off many more shows from the good folks at The NASCAR Media Group that are no longer on the air. What a shame for the sport.

On a brighter note, former DEI executive Max Siegel has turned his attention to NASCAR's diversity program. Siegel is trying to grow diversity in the athletes who participate in the sport and he is going to use TV to help. This time, the network is BET and the title of the series is Changing Lanes.

Click here for a link to the NY Daily News story about the new TV series. Scheduled to air in 2010, BET has already ordered ten episodes of the show that will feature the efforts of two drivers to get a foothold in the sport.

The NY Daily News story also mistakenly states that TLC is already airing the NASCAR Wives series. As fans unfortunately know, there are no full length post-produced NASCAR program series on the air to enjoy. The best fans can hope for is an old race on ESPN Classic or one of the regional sports networks.

Part of the fundamental appeal of the NFL was the quality programming from NFL Films. Whether it was a sincere look at a great game or a hilarious thirty minutes of funny plays, the quality of the editing and the feel of the overall program made an impression that brought new fans to the sport and satisfied the veteran fans as well. It is this element that is missing from the NASCAR TV experience.

It seems ironic that several of the top NFL Films production staff are now working for The NASCAR Media Group. These are talented folks who are just waiting to be allowed to create another solid program series. After looking at some of the offerings on ESPN2 and SPEED, it's not hard to draw the conclusion that there are timeslots available that could be served by this type of NASCAR programming.

Perhaps some new networks will step-up and take advantage of the fact that the NASCAR TV partners are passing on this product category. It might be a great opportunity for new TV networks to get some NASCAR product on their TV screens without the big rights fees paid for the actual races.

Either way, you know it's been a tough year for NASCAR reality programming when the NASCAR Wives can't push their way through The Heli-Loggers and the Cake Boss to get on TLC.

Thanks for taking the time to stop by The Daly Planet.
Posted by Daly Planet Editor at 5:00 AM 20 comments: