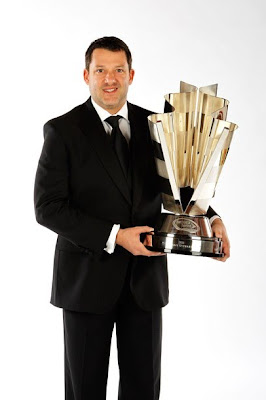 This night is always an interesting one. First, the highlight show of the combined Nationwide and Camping World Truck Series banquet is airing from 7 to 9PM. This is basically an edited version of the four hour banquet. The TV folks tried, but getting that much content into a tiny timeslot is never an easy task.

The Sprint Cup Series banquet is a long affair on TV. It is often "chunky" in terms of flow and the transitions between the live, pre-produced and time-shifted content.

This function is made for those attending in person. After a brief opening, the actual dinner begins and lasts approximately an hour. We described how SPEED does the "content shuffle" to fill the gaps in the post below.

Steve Byrnes and Jeff Hammond are the TV guys who direct traffic for the entire four hour telecast. Rutledge Wood and Marianela Pereyra are hosting the pre-race show that features conversation with the arriving personalities.

Once things get underway, Krista Voda and Mike Joy handle the duties on the stage. The presentations also feature NASCAR President Mike Helton and Chairman Brian France. Other key sponsors will appear to present specific awards.

This is a TV program produced by NASCAR about NASCAR. It is scripted, rehearsed and completely coordinated in advance from start to finish. The speeches are aided by a Teleprompter and the night is designed to focus on sponsors, drivers and teams.

If you are a person who follow social media like Twitter or Facebook, you may get frustrated that live pictures and real time comments originating from the ballroom do not match the video on SPEED. I would just remind you again that the TV presentation is designed to integrate commercials, cover the dinner portion of the evening and then not drop any content from awards and speeches.

This is a long night of banquet TV. We welcome your comments on the presentation of these two events. To add your opinion, just click on the comments button below. Thank you as always for stopping by The Daly Planet. 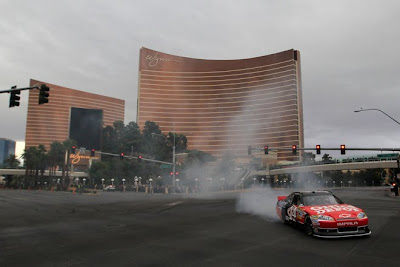 Once again this year, both SPEED and NASCAR.com will be offering a slate of televised and online programs during Champion's Week in Las Vegas, NV.

7:00PM ET - SPEED will air tape delayed coverage of the combined Nationwide and Camping World Truck Series banquet that took place last week from the Loews Hotel in Miami Beach, FL. SPEED's Rick Allen and Krista Voda host with comedian John Pinette and music from the band Simplified. Note: this show is condensed and is essentially a highlight show of the actual multi-hour function.

9:00PM ET - SPEED will present four hours of coverage of the Sprint Cup Series banquet. This presentation is broken-up into several pieces on TV, due to the actual format of the banquet.

The television program will start with a red carpet show hosted by Steve Byrnes and Jeff Hammond. Rutledge Wood and Marianela Pereyra will be handling the interviews with the attendees.

Once folks are inside, SPEED will use a mix of time-shifted and pre-produced content to essentially cover the actual dinner portion of the event. One hour of people eating just does not make for good TV. During this time, Wood and Pereyra will continue on Twitter and Facebook live interacting with fans and offering real time social media content.

When activity begins, it will be Krista Voda and Mike Joy handling the duties on the stage with Reba and Kid Rock as the musical entertainment.

The TV for this portion of the event will not match the actual live banquet. SPEED has to mix-in commercials and does not want to drop any awards content. If you are active online, you will find that just like watching a NASCAR qualifying show on SPEED, all of the content will be presented but not live. Just like under green flag racing, there are no TV time-outs during the actual banquet.

This has led to fan frustration in past years, as reporters and PR reps have been tweeting and putting pics on Facebook of the champion's speech while it has not yet even begun on the TV presentation. Hopefully, this post will help some fans to understand why this is the case.

The SPEED telecast is scheduled to end at 1AM ET, but starts to re-air once again at that time. The network does a good job with this event. The evening is not "made for TV" but is designed for those attending the function in person.

We will be live blogging the Friday telecast and will be able to answer questions and help with other issues that may arise. In the meantime, you have been warned that once again this year the real time social media stream of information coming from the banquet will not quite mesh with what is being seen on TV.

We welcome your questions and comments on this topic, just click on the comments button below. Thanks for taking the time to stop by.