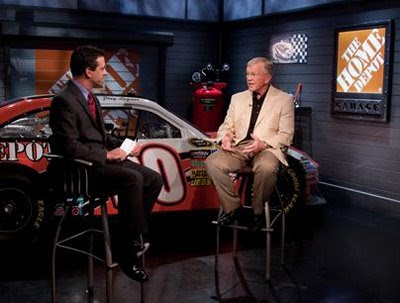 Well, here we are. Thursday, the gang of 12 will be in New York City doing the media dance to drum-up headlines for the Chase. Sunday, they will be racing at 1PM ET on a flat track in New Hampshire on ABC.

Mike Massaro will host a one hour version of NASCAR Now at 5:30PM on Thursday. Massaro and his ESPN counterparts will do their best to push the Chase on the various ESPN shows and networks over the next several days. Smiling drivers in suits and ties will be a momentary blip on the national TV radar.

There they are, side by side. The same drivers you have been seeing since February are matched-up against the local gridiron heroes. The thrill of racing inches apart goes head to head with the long bomb and the miracle comeback. Tom Brady vs. Jimmie Johnson. The million dollar smile and the model wife.

New Hampshire brings tight racing, little passing and angry drivers. This year, it also brings the new restart rules. FOX and CBS bring nine different regional games at 1PM that cover the nation. The NFL stories are fresh and the sport is on a roll.

NASCAR's Sprint Cup Series has used four TV networks to get this far. SPEED stepped in for the Daytona twins and the All-Star weekend. Fox started the regular season and then handed-off to TNT for a short summer run. Now, ESPN is again using their ABC network to bring this ten month season to a close.

At this time of the year, pre-race shows like SPEED's RaceDay and ABC's NASCAR Countdown go up against ESPN's NFL Countdown and Fox NFL Sunday, which bills itself as America's most watched pre-game show. Even on Monday nights, This Week in NASCAR on SPEED finds itself looking over at Monday Night Football on ESPN.

So, what is a sports fan going to do? How about taking a moment and telling us how you are going to handle Sunday at 1PM? NASCAR and the NFL meet again.

Are you taping one and watching the other live? Surfing back and forth for three hours? Picture-in-picture? Many NASCAR fans already multi-task with radio, online scoring and chat. Does the NFL change those plans?

Finally, has the Chase for the Championship helped you to stick with NASCAR? The stories are good, from Mark Martin through Juan Pablo Montoya.

Click here to read our column from last season on this subject. We got some fantastic comments.

To add your opinion on this topic, just click on the comments button below. This is a family-friendly website, please keep that in mind when posting. Thank you for taking the time to stop by The Daly Planet.
Posted by Daly Planet Editor at 12:15 AM 60 comments: