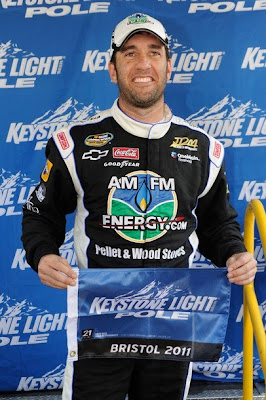 It's going to be a fun night for the Camping World Truck Series at the Bristol Motor Speedway. The track was slick during qualifying and now a full Whelen Mod race has laid down a different rubber compound. This is going to be a show.

Krista Voda starts off the coverage with The Set-Up pre-race show. Hermie Sadler and Ray Dunlap are the reporters. Once the race is underway it will be Rick Allen, Phil Parsons and Micheal Waltrip calling the action.

Waltrip was working the qualifying earlier in the day and had returned to his overbearing personality. It was tough to listen to him talk overtop of his two booth mates. Let's hope someone whispered in his ear to tone it down for the race.

The director is critical for this race. With short laps and fast action, if the director makes the decision to use tightshots and in-truck cameras, then most of the incidents will be shown on replay and the overall telecast will suffer.

The fact of the matter is that Bristol offers two of the most dynamic highshots in sports TV. One if from on top of the tower and shows the entire track with the cars just whirling around at speed. The second is the aerial shot that is tremendous on restarts and for showing groups of trucks racing in a pack. Let's hope we see those tonight.

A good showing at this track is just what the series needs. It is still reeling from lack of sponsorship and the fact that several top drivers are at home this weekend and without a ride. Some solid racing in primetime on national TV could be just what the doctor ordered to set the series up for the long run to Homestead.

This post will serve to host your comments on the SPEED coverage of the Camping World Truck Series from the Bristol Motor Speedway. To add your TV-related comment, just click on the comments button below. Thanks for stopping by. 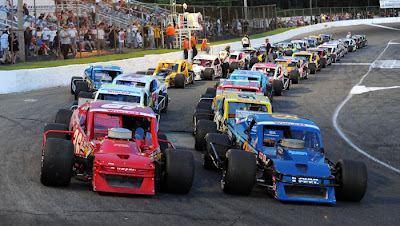 Every year the Whelen Modified Tour fights for TV time. Bristol Motor Speedway gives the teams an opportunity for national TV on a Wednesday. Sometimes, something is better than nothing.

The good news is that Mod fan Mike Joy is calling the race along with regional racing expert Dick Berggren. Bob Dillner, who is also deeply involved in the regional racing scene, will be the pit road reporter.

It's great of SPEED to air this race that gives fans an opportunity to see the teams and personalities of a tour that is famous throughout the greater New England area.

The Mods put on a great show and the bumping and passing style of the series should make for some interesting racing. Look for Joy to pass along a lot of information about the drivers and the history of this tour during the telecast.

This post will serve to host your comments on the SPEED coverage of the Whelen Modified Tour from the Bristol Motor Speedway. To add your TV-related comments, just click on the comments button below. 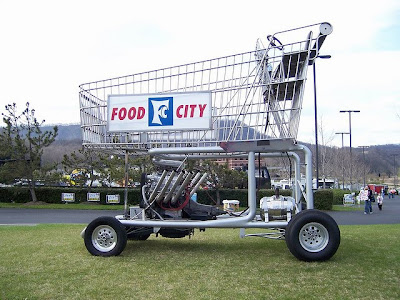 This week is always a little bit different for several reasons. Luckily, both SPEED and ESPN have the Bristol Motor Speedway TV scheduling information out for viewers in a timely fashion.

Things kick-off Wednesday with the Whelen Modifieds and the Camping World Truck Series on SPEED. The truck TV team of Rick Allen, Michael Waltrip and Phil Parsons will offer qualifying at 5PM ET to start the day.

Then, coverage of the Modified race will begin at 6PM. Mike Joy and Dick Berggren will be in the booth for this event with Bob Dillner working pit road. These three men are deeply into the regional racing scene and always have a blast with this telecast.

Krista Voda, Hermie Sadler and Ray Dunlap start the truck series pre-race show at 7:30PM and then race coverage begins shortly after 8PM. SPEED continues to present the most consistent TV coverage of any NASCAR national touring series with the truck telecasts.

Thursday is Food City Race Night in beautiful downtown Bristol, featuring the hot rod shopping cart seen above. So there is no TV from the track, just NASCAR Now and RaceHub will be providing the usual Thursday programs.

Things pick back up in a big way on Friday. SPEED is once again providing all the support programming right up to race time. Rick Allen, Jeff Hammond and Phil Parsons will work the Nationwide Series sessions. Mike Joy, Larry McReynolds and Jeff Hammond will handle the Sprint Cup Series activities.

Both qualifying sessions will be on SPEED, with the Nationwide Series at 3:30PM and the Sprint Cup at 5PM. As usual, John Roberts will handle the gaps between the on-track sessions with his NASCAR Live show. Randy Pemberton will be his reporter this weekend.

Marty Reid and the ESPN gang finally show up on Friday night at 7PM for a thirty minute pre-race show and then the Nationwide Series race. It's the usual cast of characters with Dale Jarrett and Andy Petree working with Reid.

It's always interesting to watch ESPN try to squeeze 11 on-air voices into a live telecast from a track where a green flag laps takes less than fifteen seconds. Even more interesting are the commercial breaks. Think of it this way, two laps missed for every thirty second spot.

Mike Massaro offers NASCAR Now on ESPN2 at 10AM on Saturday from the other Bristol with Ricky Craven in the studio. David Newton will be reporting from the track. This is the hour long Sprint Cup Series preview edition.

The chaos that is SPEED's RaceDay is always amplified for the Bristol night race. 5PM should bring an interesting group of fans to the stage for John Roberts, Kyle Petty and Kenny Wallace. As usual, Wendy Venturini and Hermie Sadler will be holding down the fort in the infield.

The Sprint Cup Series race is on ABC and that poses a couple of problems this time of year. Those come in the form of NFL preseason games being carried by some ABC stations that will be preempting the live race.

Here is the information offered by ESPN for fans in those markets:

Due to some ABC affiliates carrying telecasts of NFL pre-season football games or other programming on Saturday night, the NASCAR Sprint Cup Series race at Bristol will air regionally on ESPN2 in eight markets: Nashville, Tenn.; Duluth and Rochester, Minn.; Phoenix; Casper, Wy.; Sioux Falls and Rapid City, S.D.; and Weslaco, Tex. In Houston, the race will air on the local ABC affiliate's digital tier station.

What this essentially means is that ESPN will be providing to the cable systems in those markets the ability to use ESPN2 as a channel to replace ABC. Viewers in those markets should be able to see the entire race by simply going to the ESPN2 channel.

In Houston, that TV market is big enough for the ABC local station to have a second channel available on the cable dial and over the air. That is called a digital tier station.

This is a solid plan from the ESPN/ABC group designed to make the NASCAR race easily available to viewers in the affected markets.

The big finale Saturday night puts Rusty Wallace in the Infield Pit Studio with Brad Daugherty. These two get pretty fired-up about this race, so host Nicole Briscoe may have her hands full at 7PM for thirty minutes.

It is going to be a joy to have Allen Bestwick on the race call. After years of sub-par announcing of this event, ESPN has given Bestwick an opportunity to get this coverage back on the right track. One gets the feeling Jarrett and Petree are ready to help.

Sunday features the return of Dave Despain from an Alaska motorcycle trip to Wind Tunnel at 9PM on SPEED. Prior to that program the usual SpeedCenter and Victory Lane shows air. It's still amazing that SPEED cannot figure out doing Victory Lane live after the race would be a home run with fans.

So, set the DVR for Wednesday and get ready for some early racing this week. Keep an eye on the weather forecast as well to see what happens with Hurricane Irene and potential landfall on Saturday morning. We'll keep you posted.

Happy to have your comments on these topics, just click the comments button below.