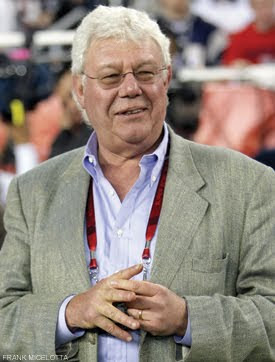 NASCAR held a conference call to notify the media of changing start times for Sprint Cup Series races in 2010. David Hill of Fox Sports, who is pictured above, was joined by David Levy from Turner and John Skipper from ESPN. Brian France was also on the call.

Hill admitted he was wrong to push for later start times three years ago and that it was time for a change. All the TV partners have agreed with NASCAR on standardized race times for 2010.

Nicole Manske will host NASCAR Now at 5PM on ESPN2. Ryan McGee will be a guest and the complete overview of the new start times and how these changes were driven by the fans and the TV ratings will be discussed.

Legendary owner Bud Moore will also be Manske's guest as he speaks about his history in the sport during the week before the first class of Hall of Fame inductees is announced. This is part of an ongoing series of interviews on NASCAR Now.