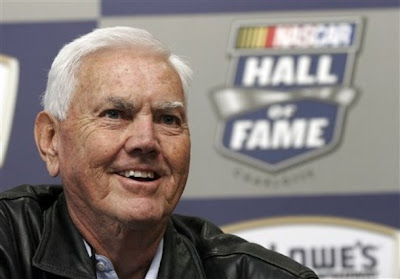 It has been a whirlwind week already on the NASCAR TV and media scene. Here are some news, notes and updates on topics that may be of interesting to you this week:

The Hall of Fame TV begins on Tuesday morning at 9AM ET on SPEED. Three hours of live programming will cover the official opening of this new facility in downtown Charlotte, NC. Mike Joy, Darrell Waltrip and Larry McReynolds will anchor the telecast. Steve Byrnes, Krista Voda and Jeff Hammond will be interviewing the NASCAR personalities on hand. Ken Squier and Kyle Petty will be offering commentary. The entire show will re-air at 9PM ET as well.

ESPN2 will have a presence in Charlotte and offer an expanded one-hour NASCAR Now program on Tuesday at 5PM hosted by Mike Massaro. On Wednesday's show, Dr. Jerry Punch will be feautured in an in-depth interview with Larry Pearson. Punch will talk with Pearson about his recovery from injuries suffered in a charity race at Bristol, TN.

Viewers may have noticed the changes in the Monday night line-up on SPEED. Jimmy Spencer's What's the Deal show has been cancelled. After Race Hub, SPEED inserted an hour of PINKS All Out before returning to other shows with NASCAR connections. This is a very clear signal that more changes will be coming as SPEED continues to recover from the ill-timed cancellation of This Week in NASCAR.

Big network news this week was the upcoming launch of SPEED2. With all the different motorsports programming available from around the world, SPEED has decided to put together an online broadband channel that sounds a lot like the old SpeedVision. Touring cars, FIA series, FIM motorcycles, rallys and endurance races are going to be featured. The other use of this channel will be to stream live news events and media announcements. This is going to be an "authenticated broadband channel." What the means simply is that you must already be a SPEED subscriber to access it online. There will be more on this topic next week as the details emerge.

The Sprint Cup Series coverage on FOX from Darlington saw a slight increase in the TV ratings. Here is that info from Jayski: NASCAR on FOX had a 3.9/8 overnight rating Saturday night for racing from Darlington Raceway for the Showtime Southern 500, an 8% increase over last year's 3.6/7 for the same race. The Sprint Cup race ran second for the night to ABC's NBA Playoff game.

Finally, the Inside NASCAR on Showtime gang will be focusing on the Hall of Fame for the Wednesday 10PM ET show. This program is actually taped at the NASCAR Media Group studios in the Hall of Fame building complex. Chris Myers hosts with Brad Daugherty, Randy Pemberton and Michael Waltrip on the panel.

Let's use this post for your comments on this topic, including the Hall of Fame ceremonies. To add your opinion, just click on the comments button below. This is a family-friendly website, please keep that in mind when posting. Thank you for taking the time to stop by The Daly Planet.
Posted by Daly Planet Editor at 7:00 AM 52 comments: