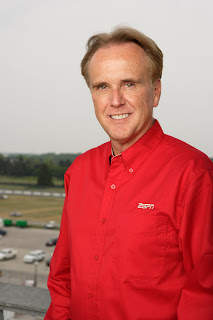 This season, it has been veteran ESPN announcer Marty Reid who has stepped-in to handle the substitute NASCAR play-by-play role. When the Sprint Cup and Nationwide Series are racing at different tracks, it has been Reid and Randy LaJoie who have provided the commentary with good success.

Allen Bestwick has also filled this role for ESPN since Reid has been assigned to the IRL TV package for the last several seasons. In order to move Reid over to the IRL, ESPN removed him from its very popular NHRA coverage and replaced him with Paul Page.

As television motorsports contracts continue to shift, the latest victim of the ESPN space squeeze is Tony George and the IRL. After a long relationship, ESPN told the IRL that it wanted the Indy 500 for ABC and only a few other races for ESPN. Take it or leave it was the offer.

In an ironic twist, George needed to keep the ABC coverage of Indy as the anchor of his entire IRL franchise. So, he took the ESPN offer. The entire remaining IRL schedule wound-up moving to the Versus TV Network. Owned by Comcast, it used to be called the Outdoor Life Network.

What this essentially did was free up Marty Reid from his 2009 TV commitments. This left the door open to include Reid in the upcoming NASCAR efforts on ESPN and ABC.

Before the 2008 season, ESPN VP of Motorsports Rich Feinberg made a series of bold moves. Almost all of them paid-off in spades. Moving Dale Jarrett into the announce booth as the Lead Analyst proved to be just what ESPN needed to stabilize that position.

Rather than release Rusty Wallace, Feinberg shrewdly put him downstairs in the Infield Pit Center. In order to give Wallace the type of professional TV support and structure that he needs, Feinberg brought-in Allen Bestwick as the full-time infield host.

The results were great as Bestwick used Wallace and Brad Daugherty all season long to handle everything from the pre-race show to red flags and rain delays. Having this element handy changed the tone of the coverage.

Now, Feinberg is going to have to handle the one change he did not make before last season. That is addressing the play-by-play assignment for both the Nationwide and Sprint Cup Series coverage. This one is going to be tough to tackle because unlike the other changes, this one has an odd man out.

Should Marty Reid step-in for Dr. Jerry Punch, it would mean removing a long-time friend of NASCAR and a future NASCAR Hall of Fame broadcaster. The problem is that Punch is primarily a reporter and struggled with the lap-by-lap call of the races.

What ESPN desperately needs is a versatile play-by-play announcer who can breath life into the live races. It appears that may well be Marty Reid.

What role Punch would fill leads us into a very interesting discussion. ESPN produces the final seventeen Sprint Cup races, including all ten Chase races for ABC. The high-profile Sprint Cup Series events certainly demand an Infield Pit Studio and a Tech Center. The question is, does the Nationwide Series need the same level of TV production?

Word is that ESPN is trying to cut NASCAR production costs for next season to the tune of several hundred thousand dollars per event. While the NASCAR Media Group controls the TV compound at the races, the TV networks bring-in their own TV trucks and specialized equipment like the Tech Center and Infield Pit Studio.

When Feinberg looks over at SPEED's coverage of the Truck Series, he sees only five announcers with no TV toys. SPEED has no Tech Center, cutaway car or infield studio. The pre-race host stands alone with one camera to set-up the race.

It should be interesting to see what changes Feinberg makes for next season. As TV logistics go, those changes are actually being made right now. Contracts, schedules, travel, crewing and other duties have to be buttoned-up before the new year.

While Fox and TNT produce their slice of the Sprint Cup pie and then leave town, it is really ESPN that bears the deepest production costs in terms of producing the entire Nationwide Series and the final seventeen Sprint Cup races.

When February rolls around, TV viewers may see some new faces and less of the bells-and-whistles that have come to define the ESPN coverage over the last two seasons. TDP will keep you posted if and when any on-air changes become official.

The Daly Planet welcomes comments from readers. Just click on the COMMENTS button below and follow the easy instructions. The rules for posting are located on the right side of the main page. Thank you for taking the time to stop by.
Posted by Daly Planet Editor at 3:00 PM 40 comments: