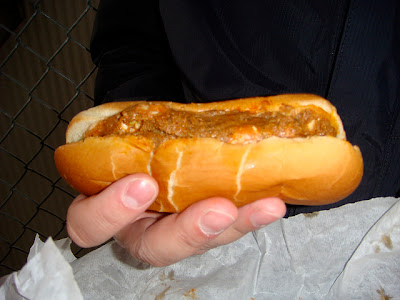 Here are some TV and media notes for Friday. The Sprint Cup and Camping World Truck Series head to Martinsville this weekend. That can mean only one thing, hot dogs.

It's still two dollars for the pink dogs Martinsville Speedway has been serving up for years. Crews keep running totals on a board above the concession stand. Hot dog pride is on the line.

First off, Friday is a big day for our friends at ESPN. After several failed attempts at figuring out what ESPN2 was supposed to be, the "cloning" of ESPN finally did the trick. Now, the network that launched in October of 1993 will celebrate April Fools Day in style.

When the clock slips past midnight, ESPN2 will officially pass the 100 million home mark for distribution in the US. That is a big number. NASCAR's other cable partners include TNT with 102 and SPEED with 82 million.

The success for ESPN was to craft ESPN2 as just another cable outlet for live event programming. Both the Nationwide Series and the daily NASCAR Now program certainly will benefit from those new numbers. While the morning shows on ESPN2 have found some traction, it is the fact that ESPN can now use either of two networks to reach over 100 million homes that is the big deal.

Over at SPEED, new EVP Patti Wheeler is happy to boast about a new live event. The network is going to carry Denny Hamlin's Short Track Challenge on April 28 from Richmond International Raceway.

"SPEED jumped at the chance to broadcast the Denny Hamlin Short Track Showdown live because not only does some of the best racing of the year usually come out of Richmond, this event will showcase NASCAR stars out of their comfort zone a bit,” said Wheeler in a media release. “The Showdown promises to be fun for all involved, will benefit a great cause and should get everyone pumped up for Friday’s Nationwide Series race.”

Hamlin's charity event benefiting his foundation used to be held at Southside Speedway, a Richmond area favorite. Unfortunately, owner and promoter Sue Clements recently suffered a stroke. The racing season has been postponed until she recovers. The good news for Southside Speedway is that it was NASCAR sanctioned in December and the staff continue to be hopeful of holding some NASCAR regional events later this season.

At 7PM Hamlin and crew chief Mike Ford will appear on SPEED's Trackside. Steve Byrnes hosts with Darrell Waltrip and Jeff Hammond as the expert panel.

We welcome your comments on these topics as well as the Friday coverage from Martinsville on SPEED. To add your opinion, just click on the comments button below. This is a family-friendly website, please keep that in mind when posting. Thank you for taking the time to stop by The Daly Planet.