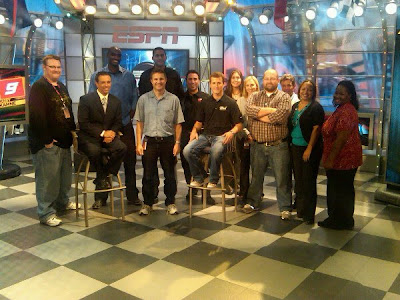 Update #2: Leaving this post up as both NASCAR Now, which was preempted on Wednesday and Race Hub will have updated RCR appeals coverage on Thursday.

There may be some gloom and doom in NASCAR land over the production and TV ratings of the two Chase races this season, but one part of the NASCAR TV landscape is thriving. Right now, a little good TV news goes a long way.

ESPN2's six day a week NASCAR Now and SPEED's four day a week Race Hub are both cranking along on eight cylinders. Tuesday night was a great example of how two TV series with completely different approaches to the same subject matter can co-exist.

Mike Massaro has been a workhorse for ESPN this season. Monday, he filled-in on the one hour show for Allen Bestwick. After the recent passing of his mother, Bestwick was attending to family matters after anchoring the Dover weekend from the track.

The NASCAR Now production team, pictured above, has been tinkering with the show and on Tuesday had Kasey Kahne in the studio. Although notoriously low-key with the media, Kahne mixed it up as a co-host with Massaro and actively took part in the entire program.

Dale Jarrett and TNT/SPEED's Kyle Petty were among the satellite liveshot guests and both interacted well with Kahne on a variety of topics. Massaro several times put Kahne on the spot about issues from the Hamlin and Harvick spat to his racing future next season. Kahne absolutely took every question head on and never missed a beat.

The feature of the program was Lead Reporter Marty Smith's interview with Denny Hamlin. Smith knows how to ask the right questions the right way and really got Hamlin to address a wide variety of topics with honest comments.

Smith, Nicole Briscoe, Angelique Chengelis and the multiple other contributors to this program make it a pleasure to watch. Ricky Craven is the best NASCAR studio analyst by far. ESPN has been struggling to find a re-air slot for NASCAR Now and often the 5PM original airing is the one and only time this program can be seen by fans.

Even as the sport is in the Chase for the Championship, the Monday and Tuesday shows this week did not re-air. Due to the fact that these programs cannot be made available online, it would seem that ESPN would make sure to show them again and promote the very races for which the network paid dearly to televise.

Update: Informed by ESPN this AM that the Wednesday 5PM NASCAR Now program has been cancelled due to scheduling conflicts. This is the day that the RCR appeal is being heard and cancelling this program is just a horrible decision.

Away from the suits and ties of ESPN is the casual style of SPEED. Since Steve Byrnes took over Race Hub, the series has the personality and credibility it needed. SPEED is still working to adapt the studio, but things have come a long way from the famous car couch and pinball machine.

Danielle Trotta has been a solid addition to the program as the fulltime reporter based in Charlotte, NC. Still a tough sell for some female fans, Trotta has been asking the right questions and working to solidify herself as not just another pretty face.

SPEED has also been working veteran Wendy Venturini back into the interview mix. Fans were miffed when Venturini's Real Deal segment was dumped from the RaceDay show so resources from the NASCAR Media Group could be used for a new NASCAR cooking series.

The strength of Race Hub is the ability to have guests drive a short distance to the studio. It didn't take NASCAR types long to grasp that with the big new SPEED studios, a driver could bring a show car or two along for the interview. Tuesday, that is exactly what Ryan Newman did.

Following a poignant interview with Jack Roush on Monday, Byrnes led Newman through topics from on-track anger to the upcoming birth of his daughter. Confirming that Thanksgiving was the due date, Newman talked candidly about his thoughts on fatherhood. Once again, Byrnes' experience in the sport made the interview click.

With an hour each day, Byrnes and the SPEED staff have begun to truly grasp that they have the ability to provide a valuable service to the sport with each program. Airing two hours after NASCAR Now, the challenge for Race Hub is to deal with breaking news and eventually live reporting from the field with Trotta.

While SPEED has backed off its original commitment to re-air Race Hub at midnight Eastern, the current 11PM Pacific timeslot is better than nothing. Eventually, as the program matures, it may also find a morning home just like SportsCenter on ESPN.

There may be some NASCAR TV problems to address this off-season, but the success of both these daily shows is a tribute to the hard work of the production staff and the commitment of ESPN and SPEED to keep NASCAR fans updated away from the track.

Perhaps you could share with us your views on these two shows. To add your opinion, just click on the comments button below. This is a family-friendly website, please keep that in mind when posting. Thanks for taking the time to stop by The Daly Planet.
Posted by Daly Planet Editor at 7:30 AM 21 comments: