What should Robin Miller Ask Danica Patrick Friday On SPEED? 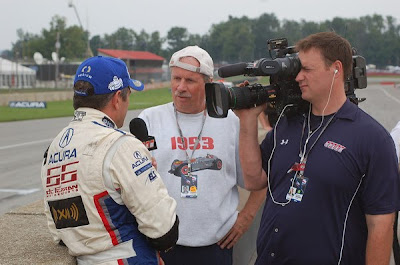 Friday at the Daytona International Speedway is going to bring some interesting weather. Scattered thunderstorms are going to be underway in the morning, followed by a likely tornado watch with a 100% chance of heavy thunderstorms. That from the Weather Underground website. Into this scenario walks Danica Patrick and SPEED reporter Robin Miller.

SPEED will carry at least ten ARCA races this season and that lets them get a piece of Danica. So, Friday the idea was to feature updates and information as the first day of ARCA open testing got underway.

Miller is going to do a live interview with Danica at 1PM, probably during the lunch break from testing. That would have given him an angle of being first to ask about her "at speed" laps at Daytona among the ARCA horde. Now, it appears that Danica will have lots of downtime long before the interview.

Let's take a moment and recap Danica and her recent media courtship.

First, we saw Danica make the rounds of the morning talk shows in NYC and unveil her new green IRL Go Daddy car. Even with the new sponsorship, IRL team owner Michael Andretti did not look very happy on camera. Now we know the reason why.

Danica next appeared with Mr. Bob "Go Daddy" Parsons at a hastily called Phoenix, AZ press conference to unveil a new green stock car and confirm her plans to race part-time in both ARCA and the Nationwide Series for JR Motorsports. Andretti was suddenly going to have his star sharing time with the stock car set.

Thursday morning, SPEED went live with Patrick as she was the focus of yet another press conference, this time in the Concord, NC area. Patrick was joined by Dale Earnhardt Jr. who spoke about her future in the sport with his team. Kelley Earnhardt spoke about the business decisions and sponsorship that Patrick's name would bring. Crew chief Tony Eury Jr. talked about Patrick's solid learning skills in a recent Orlando area test.

While JR Motorsports driver Kelly Bires was polite with his words, it was the old crafty veteran Tony Eury Sr. who threw down some choice phrases about her potential. Eury said she ran laps in Orlando just as fast as other teams testing there. He said the goal was to go down and have Patrick win the ARCA race in Daytona and then try to win her other races. He was up front with his contention that she is not just a show.

After all of this, Robin Miller steps in for the Friday live interview. There will probably be little or no track time. The afternoon looks like a washout. Patrick was just quizzed on Thursday by the NASCAR media on a variety of topics. So, what's left?

How about helping us out and suggesting some questions that Miller can ask Patrick during his live 1PM Friday interview. Whether or not Miller even looks at this website is unknown, but what is clearly known is that we have some of the most creative and knowledgeable fans out there in racing land.

What would you like to see Miller ask Patrick? To add your question and maybe a good reason or two why he should ask it, just click on the comments button below. This is a family-friendly website, please keep that in mind when posting. Thanks for taking the time to stop by.
Posted by Daly Planet Editor at 5:00 AM 40 comments: