Monday's "NASCAR Now" Is A Greater Southeastern Affair (Updated Even) 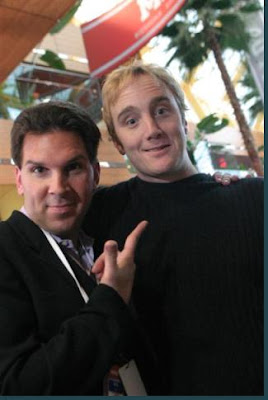 Taking a look back at the racing activity of the weekend is certainly a good idea. Several shows like the SPEED Report, Victory Lane, and even Wind Tunnel focus their energy on reviewing the motorsports happenings on Sunday night. ESPN continues its NASCAR commitment by offering a one hour review show on Monday evening.

NASCAR Now on Monday is a chaotic affair. It has been hosted by several on-air announcers, and has had all different kinds of analysts on-and-off the studio set. This Monday, host Erik Kuselias was alone on the set and voiced the highlights of the NEXTEL Cup race. He led to sound from the winner, which was "pool feed" video of Tony Stewart speaking in the Media Center to all the reporters.

Shannon Spake followed-up with a feature report on the Harvick vs. Montoya bump, and basically re-used footage from the race itself that aired on ESPN. Spake was reporting from...North Carolina.

Analyst Stacy Compton was on a liveshot in...(updated) Virginia and suggested some common sense in the Montoya hysteria. The very strange Tim Cowlishaw was also on-hand to state the obvious, and add absolutely nothing. It was never mentioned where Cowlishaw was located, but it was not Connecticut.

Kuselias asked Compton about Jeff Gordon spinning in the last couple of laps. Compton gently helped Kuselias to understand that what these guys were doing...was racing. This is a fundamental issue that is often lost on Kuselias and Cowlishaw, both of whom have absolutely no experience or interest in NASCAR racing.

Spake returned from North Carolina to wrap-up her story about The Chase contenders and how they fared on Sunday. She again used sound bites from Sunday at the track to fill-in the content on her report. Both her efforts were little more than fluff.

Kuselias read the script that summed-up the day for other key contenders, and also used the footage from the track for interview sound. This recap used a carefully prepared text to review the cars that might or might not get in The Chase.

As The Daly Planet mentioned several times, ESPN loves to make people pick things, because later it can be used against them. Compton and Cowlishaw returned to guess who would be in and who would be out of The Chase, as if their answers had anything to do with the sport or offered any new information. It once again allowed time to be filled in this hour, and absolutely nothing else.

A long recap that featured a re-edit of the footage used on SportsCenter was next, tagged with some additional sound bites from various drivers recorded after the race. ESPN's post-production is always great, and fans like the video tricks and slick editing. Kuselias voices the "bridges" between the sound, and this report featured lots of re-airing of post-race interviews.

Reporter Mike Massaro, whom many believe should be hosting this program, was then featured in a disjointed report talking about Jeff Gordon, Kevin Harvick, and generally answering questions from Kuselias about the NEXTEL Cup race. The location of Massaro was never disclosed, but he was not on the NASCAR Now set. Since most of the NASCAR production group lives in the Charlotte area, we can guess it was maybe...North Carolina? Nope. Update: Daly Planet reader Matt says Massaro was on a different set inside ESPN, because he was on ESPN News earlier that day.

Now over thirty minutes into the show, viewers have never seen Dr. Jerry Punch, Rusty Wallace, Andy Petree, or Brad Daugherty anywhere in the program. There has been no glint of the presence of on-air personalities that both ESPN and NASCAR have put their weight behind to bring the NEXTEL Cup Series through The Chase.

Despite all the footage and sound bites used from the race track, none of the ESPN on-air announce team has been included. This is a fundamental TV error of the highest order. In my time at ESPN, it would have resulted in employees being terminated. ESPN announcers on-site should have provided wrap packages for both the Busch and Cup races, especially since they know NASCAR Now often treats the Busch Series with complete disdain.

NASCAR Now's Insiders Marty Smith and Angelique Chengelis stopped-by to update the AT&T lawsuit, Kyle Busch's sponsorship, Gibbs to Toyota, and RCR rumors about Rusty returning to a part-time driver role. While Chengelis reports and lives in Detroit, Marty Smith reports from...(update) he was apparently in Tennessee this time, not his normal NC.

Jeff Burton was the featured live guest this Monday, and he joined Kuselias by telephone from...North Carolina. He re-hashed the entire Harvick vs. Montoya incident again, and then put things into perspective as a veteran about his season and his team. Interviewing drivers by phone continues to be a minor-league technique for this major-league network.

Kuselias voiced-over again another feature about The Chase and how drivers on the bubble might do at Michigan. Unfortunately, ESPN forgets about things like the COT, new fuel cells, and driver changes. This scripted feature really needed a veteran voice to add-in the slice of reality that Kuselias cannot represent.

In the final segment of this show, Compton and Cowlishaw appeared to add final comments. Compton politely described the Watkins Glen action as excellent with the COT running on a road course. Cowlishaw agreed. End of show.

Let's calmly ask the questions that NASCAR fans might ask, shall we?

ESPN was on-the-air for over seven hours on Saturday, and telecast a great Busch Series race. In this show,there were no highlights, no standings, no winner interview, and no wrap package from the announcers who called the race. Once again, the Busch race was actually on ESPN.

SPEED covered an exciting Craftsman Truck Series race from Nashville, with Travis Kvapil taking the victory. There were no highlights, no standings, and no sound from the winner. This was NASCAR's featured Friday night show for one of their three national touring series. Not a word was said.

The Harvick and Montoya incident was called "two men talking with hand signals" by NASCAR officials, but to ESPN it was everything. Earlier this season, David Ruetimann crashed his car hard into the wall at full speed. The in-car camera captured him dazed and trying to catch his breath. NASCAR Now played the footage fifteen times in a one hour show. They could not get enough.

So, what viewers got was Watkins Glen NEXTEL Cup highlights, a brief news report, and a whole lot of talking about the same thing over-and-over again. Among the many things they they did not get were Busch highlights, Truck highlights, or reaction from the ESPN announcers who called both Watkins Glen events.

This show had the potential to be chocked-full of content from a weekend rich in racing from all three national series. What viewers got was a single host in the studio relying on people in (update) the greater Southeast to provide the information and latest news about a sport totally located in...North Carolina.

Had ESPN invested in a Mooresville, NC studio they would have been able to gather all these reporters, drivers, and anyone else they needed in one location and create a dynamic and exciting show for fans.

Instead, the acerbic lawyer spent another hour "talking down" to those legally required to provide content for this show, and then summarily dismissed each one without as much as a goodbye.

This is the on-going ESPN saga of NASCAR Now, the bi-polar TV son of RPM2Night and SpeedWeek.

Luckily, both mom and dad have gone to a better place, because Junior has taken the family business and driven it...right into the ground.

The Daly Planet welcomes comments from readers. Simply click on the COMMENTS button below, or email editor@thedalyplanet.tv if you wish not to be published. All email is confidential, and will never be used or referenced in any column. Thanks again for taking the time to stop-by, and leave your opinion.
Posted by Daly Planet Editor at 5:29 PM 36 comments: