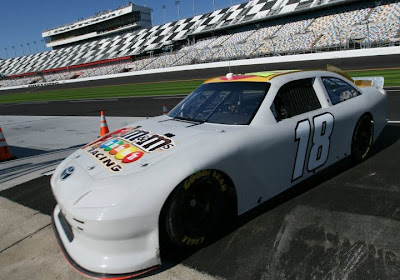 The off-season is over and NASCAR is back on TV and the Internet from Daytona as testing gets underway for the Sprint Cup Series teams.

John Roberts hosts the testing coverage. Rick Allen and Jeff Hammond have the AM session with Wendy Venturini and Bob Dillner reporting. Steve Byrnes has Larry McReynolds and Darrell Waltrip in the TV booth for the afternoon session. Randy Pemberton and Hermie Sadler are the reporters.

The idea of covering this by SPEED is to accomplish several things. First, to point out the new driver, team and crew chief combinations. Secondly, to update fans on news from the off-season by speaking to the personalities involved. Finally, to explore the new rule changes for Daytona by watching the action on the track and in the garage.

It is very clear from the radiator and cooling changes that NASCAR is still trying to break-up the "tandem racing" that fans saw at Daytona and other restrictor plate tracks last season. This will be a key element of the coverage.

This post will serve to host your TV and media related comments as the coverage rolls along. Please feel free to add an opinion, ask a question or give a review of just how you feel the Daytona activity is being translated online or on TV by SPEED.

Thanks again for taking the time to stop by The Daly Planet, now in our sixth year of providing daily NASCAR TV and media coverage.