The Anatomy Of A Deal 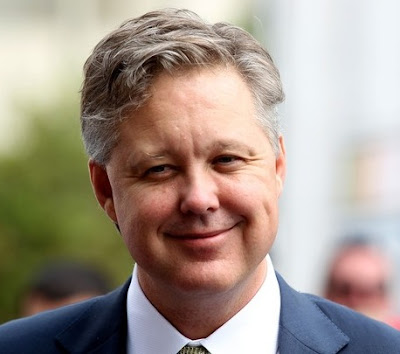 It's going to be quite a while before that smile leaves the face of NASCAR Chairman Brian France. Amid a rapidly changing sports TV market desperate for product, France struck the motherload.

Here is the full announcement with all the available details provided by both NASCAR and FOX about the new multi-year agreement between the two parties. Read it carefully, as this agreement not only covers the future of the Sprint and Camping World Truck Series, it also previews the changes coming as SPEED TV becomes the FOX Sports 1 cable sports network.

Under terms of the new agreement, FSMG also significantly increases its digital rights to include “TV Everywhere” live race streaming of its portion of the season for the first time ever beginning in 2013.

“NASCAR has been in very good hands and has enjoyed tremendous success the last 12 years in large part because of our fantastic partnership with FOX and FOX Sports Media Group,” said NASCAR Chairman and CEO Brian France. “We are thrilled to be able to extend our relationship in such a significant way for our track partners, race teams, and most importantly, our millions of loyal and passionate fans. This extension with FOX Sports Media Group helps position the sport for future growth as NASCAR continues to be an anchor with one of the world’s largest and most influential media companies.”

“We’re extremely happy to have worked closely with Brian and his team at NASCAR over the last few months to expand and extend our relationship for what is without question the most popular motorsport in the country,” said FSMG Co-Presidents and CEOs Eric Shanks and Randy Freer. “NASCAR has been a staple at FOX for more than a decade and we consider it one of the signature sports we cover. With our commitment renewed, we look forward to presenting NASCAR thoroughly, professionally and creatively for many years to come.”

On the digital front, FSMG gains “TV Everywhere” rights starting next season to live stream all FSMG races, along with pre- and post-race coverage, race highlights and in-progress race highlights to events it televises. This portion of the deal was made possible by NASCAR’s reacquisition of operational, business and editorial control of its digital platform, a move that takes effect on Jan. 1, 2013.

“NASCAR fans’ demand and desire for NASCAR content stretches across all platforms and distribution channels,” France said. “As we’ve done with this FSMG extension, we will continue to take the appropriate measures to ensure our fans have access to the sport wherever they are and through all available devices. NASCAR is one of the most accessible sports in the world and this new deal builds upon that in a very significant way.”

FSMG’s new and expanded television and digital media rights agreement with NASCAR includes, but is not limited to:

- Right to televise all practice and qualifying sessions for FSMG races

- Right to ancillary programming including, but not limited to, a nightly NASCAR news and information show as well as weekend at-track shows

- Extensive digital rights beginning in 2013, including:

For this agreement, FOX will pay $300 million annually for eight years. That would be a total of $2.4 billion. This is an increase of 33% over the existing contract, but there are some items to note.

While FOX describes the fact that it can offer streaming of races for digital devices in the new agreement, media reporter Joe Flint of the LA Times notes that NASCAR fans will have to be a subscriber of a pay-TV provider to access that content. There is little doubt that provider will be the new FOX Sports 1 network.

As regular readers of this blog know, there is no love lost at the moment between NASCAR and Turner Sports. A nasty fight over digital issues saw NASCAR wind-up spending tens of millions of dollars to buy back its own online rights. NASCAR likes to cash checks, not write them.

The new FOX agreement paves the way for FOX to possibly buy the rights to the races currently in the TNT package and present that "summer six pack" on FOX Sports 1. Remember, those races are already being seen on a cable TV network. In theory, it would just be a channel change for fans. In reality, NASCAR would love it.

Finally, the clear language in the agreement surrounding practice and qualifying sessions speaks to those races being televised by FOX. As we mentioned in past weeks, TNT has never carried those sessions and ESPN has been hit and miss at best for that network's races.

It would be improbable to believe that FOX would want a branded network like FOX Sports 1 to carry the practice and qualifying sessions for races on TNT and ESPN. Under the SPEED banner, it made sense as the network was dedicated to motorsports in theory. That is about to change.

Finally, what becomes of shows like RaceDay and Victory Lane? In the New World Order, RaceDay would spend two hours promoting a race airing on TNT or ESPN once the FOX portion of the season is done. Tough to believe FOX Sports 1 would actively promote a Sprint Cup Series race running against NFL football on the FOX Broadcast Network.

It's going to be interesting to watch all this shake out, but one thing is clear. FOX has moved into the national cable sports business in a big way and used NASCAR to bring a large body of content to it's new network.

Despite it's ongoing issues, NASCAR struck paydirt with FOX. ESPN and TNT chose to pass on these early negotiations and will not make their intentions known until several months into the 2013 season.

We welcome your opinion on this topic. Comments may be moderated prior to posting.
Posted by Daly Planet Editor at 10:00 AM 43 comments: