SPEED Will Not Be The NASCAR TV Network 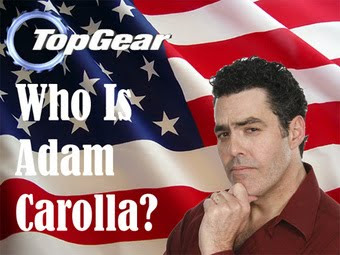 It's been lots of fun watching the changes at SPEED since former Fox Sports chief David Hill took over the day-to-day senior management of the network. He recently put veteran TV executive Patti Wheeler in charge of both the programming and production departments.

With Wheeler's extensive NASCAR background and Hill's affinity for the sport, the rumor that SPEED would become a full time NASCAR TV network was suddenly supercharged. Now we know that is not going to happen. In fact, we know a lot more about what Wheeler and Hill are planning.

Click here for the Jalopnik.com article that featured Adam Carolla, who is pictured above. It was June of 2008 when Carolla was supposed to be hosting the US version of the popular Top Gear program for NBC. Needless to say, the series wound-up appearing this season on The History Channel with SPEED's Rutledge Wood in Carolla's role. Now it appears that SPEED will be giving Carolla another chance.

Variety.com reports that Carolla will be fronting a new show for SPEED. Here are the details:

Carolla will star along with Pulitzer Prize-winning Wall Street Journal auto writer Dan Neil, ex-NBA star John Salley and Matt Farah from The Smoking Tire website. Carolla has been eager to do an auto-based TV show for some time. The show has been described as a cross between Top Gear and Fox Sports Net’s old The Best Damn Sports Show Period franchise, which featured Salley as a regular. According to the pitch, the show will feature news and conversation centered around cars, as well as pre-recorded features shot on the road.

In a press release, SPEED president Hunter Nickell detailed that SPEED is not developing original NASCAR-themed programs for prime time, but more celebrity-driven lifestyle and enthusiast shows. The lone NASCAR entry is once again a highlights program.

"SPEED has a history of success with original enthusiast programming," said Nickell. "We are aggressively communicating with the production community, teaming with some of the biggest names in the category as we develop the 2011 weekday prime time lineup."

This February, here are the new shows that will debut on SPEED weekdays after Race Hub.

American Trucker (Thursdays at 10 and 10:30 p.m. ET, two 30-minute episodes) – Hosted by designer/artist and fanatical truck expert Rob Mariani, a finalist on HGTV's Design Star, this new show introduces the audience to iconic trucks, the famous routes they followed and the cargo missions that made history.

Car Science (Wednesdays at 10 p.m. and 10:30 p.m. ET, two 30-minute episodes) – The producers of the popular franchise series Sports Science and Fight Science bring a mad-cap scientific approach to the world of automobiles.

Speed Makers (Thursday at 9 p.m. ET, 60 minutes) – Speed Makers takes a look at the iconic builders and epic innovators of acceleration. From celebrated mega-structures like Daytona International Speedway to behind the scenes at Aston Martin, this show celebrates the masterminds of engineering power.

Ticket to Ride with Dan Neil (Tuesday at 8:30 p.m. ET) – Pulitzer Prize-winning Wall Street Journal automotive writer Dan Neil takes viewers inside the business of cars, offering insightful test drives, interviews and commentary with a trademark wit that has made Neil a must-read for car lovers. Adam Carolla and others are along for the ride.

The 10 (Wednesday at 8 p.m. and 8:30 p.m. ET, two 30-minute episodes) – A fast-paced list program, highlighting the best of the best from the world of NASCAR. First season topics include Most Bizarre Finishes, Throw-downs, Talladega Moments, All-Time Races, Closest Calls and Earnhardt Moments.

Hunter's only comment on any sort of original NASCAR-themed programming is that there are some projects still in development. Well, being in development at a time when other shows are signed, sealed and delivered is not exactly a good thing. There was a time when SPEED worked very hard on creating NASCAR content, but it seems those days are over.

On January 24, the network returns Race Hub Monday through Thursday at 7PM with host Steve Byrnes and reporter Danielle Trotta. This weekday NASCAR news series took SPEED years to finally produce amid failure after failure of enthusiast and lifestyle shows. Now, ironically, it is the cornerstone of SPEED's prime time line-up.

It does seem amazing that SPEED will not support its own coverage of the Camping World Truck Series with a weekly show. Also, original programming concepts from NASCAR Wives to a Humpy Wheeler interview show seem to have fizzled once again.

Recently, we saw The History Channel produce a season of Madhouse, Max Siegel create Changing Lanes for BET and Showtime offer Inside NASCAR every Wednesday during the season. Even Hendrick Motorsports got into the act with Jimmie Johnson 24/7 on HBO.

It's a bit of a surprise that SPEED is going to focus on the weekend coverage from the tracks and Race Hub as the primary NASCAR offerings. Monday nights on SPEED used to have a big NASCAR theme and serve as a wonderful platform to attract fans still buzzing about the races from the weekends.

It seems that once again programs connected in some way to actual racing have given way to made-for-TV entertainment as SPEED continues to push what it calls enthusiast programming in prime time for another year. My take is that the identity crisis at SPEED continues.