Hammond Out Waltrip In At The Hollywood Hotel 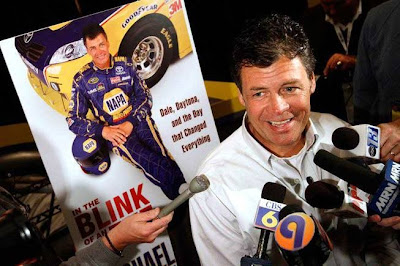 When the 2012 NASCAR on FOX season opens in Daytona, it will be the Waltrip brothers in the Hollywood Hotel. Jeff Hammond is out and will assume a new role as a roving pit reporter. Michael will also take Hammond's previous role of commenting from the Hollywood Hotel during and after the race.

Chris Myers will remain as the infield host with Mike Joy and Larry McReynolds also keeping their current roles in the TV booth next season.

Here are some excerpts from the NASCAR on FOX media release on the subject:

And in an innovative new role for NASCAR’s No. 1 prerace show, veteran analyst Jeff Hammond takes his extensive experience as a former championship-winning crew chief to where the action is, in the garages and pit road. Both moves were announced today by FOX Sports Media Group President, Co-COO and Executive Producer, Eric Shanks.

“Michael is simply one of NASCAR’s most gregarious, genuine personalities, and we loved the dynamic between him and Darrell when we paired them up on occasion last season,” said Shanks. “Michael has also been featured in numerous television commercials over the last decade, which makes him familiar to a much broader audience. I expect a lot of ‘gotta see’ TV coming out of an all-Waltrip Hollywood Hotel next season.”

Shifting to Hammond, the plan is to use his extensive experience as a former NASCAR crew chief to work the pavement and mine the grease pits for the latest news and go wherever big stories develop all race-day long. Having a former crew chief serve in this role is a first for network television’s NASCAR coverage.

“We’re excited about Jeff’s new role,” said Shanks. “It’s a first for televised NASCAR coverage, and no one knows more about cars than Jeff does. Now he’ll be in a much better position to cover and humanize that side of the sport for viewers.”

Well, there you have it. Change happens just like this in sports TV. It's wrong to assume that Hammond is the odd man out here. His role in the Hollywood Hotel once the race started was limited. Now, he gets an opportunity to chase the kind of stories that the pit road reporters sometimes cannot follow-up.

You may remember that when the Waltrips were together earlier this season it got positive reviews. Instead of the huckster personalities that both can display at times, it was intstead two analysts comparing opinions on the racing action.

Some have suggested that this move is the beginning of a transition to ultimately moving the younger Waltrip into the TV booth when "Ole DW" decides to pack it in. It actually feels a lot more like a new TV executive realizing that the NASCAR on FOX package needs a little shake-up.

Love them or hate them, the Waltrip brothers will be the first things viewers see when each NASCAR on FOX Sprint Cup Series telecast opens in 2012. While DW might still be running off to the TV booth, don't forget that Michael will be live in the Hollywood Hotel and may well quickly redefine the role of infield analyst during the live race.

We welcome you opinions on this topic. To add your comment, just click on the comments button below. Thanks as always for taking the time to stop by The Daly Planet.