Time For A Change In TV Land 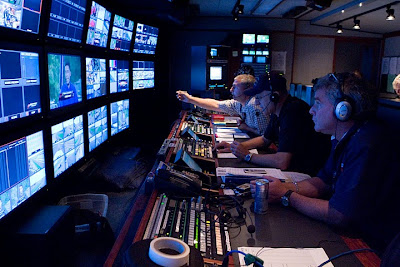 According to tomorrow's USA Today Page 3, overnight ratings for the Sprint Cup Series race at Texas on ESPN was 2.7, down 12.9% from last year on ABC.

This means that slightly more than 3 million viewers tuned-in to watch the action from Texas. Basically, each cable rating point equals 1.159 million homes and that includes live viewing and DVR results.

These results are not what NASCAR expected for the Chase. Regardless of whether the final ten races are on ESPN or ABC, the numbers should be significantly higher due to the nature of the sport and the tight battle for the season championship.

ESPN and NASCAR recently had a meeting in Charlotte, NC to discuss this situation. NASCAR's position was that the product being delivered to the TV network was solid and the action was made for TV.

ESPN's answer was that the network had exposed this product to a universe of 90 million cable TV homes. The telecasts had been produced in HD, featured a group of well-known personalities and had comprehensive pre and post-race shows.

Unfortunately, after Talladega and Texas it's clear that the final NASCAR TV product being delivered by ESPN is just not getting the job done. It's time for a shake-up in TV land.

We have seen SPEED switch things around on various NASCAR TV shows as the network auditions talent in new roles for next season. Sunday, we even saw a pit crew switched in the middle of the race simply for better performance. The bottom line is that it's the time of the year where there is nothing to lose.

There are twelve on-air personalities heading for Phoenix this weekend to work on the ESPN telecasts. This group will handle practice sessions, qualifying, two pre-race shows, a Nationwide Series event and then the Sprint Cup Series race.

Many of these on-air talent are very versatile. Some have previous experience in other roles in NASCAR telecasts than the ones they currently fill for ESPN. There are plenty of opportunities to shake things up and put people in different positions on some of the 13 hours of coverage that ESPN and ESPN2 will produce this weekend.

Inside the TV truck the situation is the same. It's time for another director to be given a chance to create a new perspective for the ESPN viewers and see how they react. The difference between the SPEED coverage of the truck series and ESPN's coverage of the Sprint Cup Series races from Talladega and Texas was stunning.

The sweeping camera shots, aerial perspectives, wide angles and focus on racing from SPEED was in sharp contrast to the tightly zoomed, carefully controlled and completely disjointed coverage from ESPN. It's time for a change.

Chad Knaus made a tough decision on Sunday that was based strictly on team chemistry and performance. He replaced one group of highly trained and experienced team members with another. No one ever mentioned that a specific member of the group was the source of the problem. It was simply time for a change.

ESPN is on the air Friday from Phoenix and originates telecasts through Sunday. This weekend is the next to last for the season. The finale in Homestead is always a bit different with lots of network management, public relations types and special guests in attendance.

If there was ever a weekend in which ESPN could shuffle the deck, shake-up the status quo and try some new things, this is it. Let's see if it happens. The first telecast is Friday at 2PM on ESPN2 with Sprint Cup Series practice. It could be a very interesting weekend.