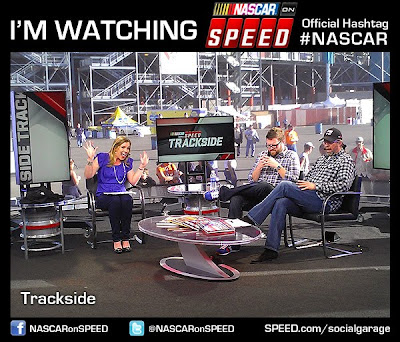 Here are some TV and media items crossing the desk this week:

It's been a little quiet as we wait for the final TV ratings from the Sprint Cup Series race in Phoenix. The overnight numbers were a 5.0 rating with a 10 share. That is down from the previous season and is the lowest overnight rating in five years. We will have more on the ratings race when final PIR numbers are released on Wednesday. Click here to view the Jayski.com TV ratings chart.

ESPN is promoting a gain of a little over 10% in Nationwide Series ratings, reporting a 1.7 cable TV rating with an audience of 2.4 million homes. That is slightly above any of the spring Phoenix races the network has covered. One can only imagine how many new fans tuned-in to see Danica Patrick, only to have her fade quickly.

Speaking of ESPN, word is that Ryan McGee and Marty Smith will be hosting the Wednesday 3PM version of the NASCAR Now program. This show does not re-air and there is no show Thursday or Friday due to college basketball tournaments. This is truly DVR theater in any time zone.

SPEED is reportedly happy with the revamped Trackside program. The network passed along that the show got higher ratings in this format than it ever did in the old style with a large panel discussion. That means Krista Voda, Kyle Petty, Rutledge Wood and Marianela Pereyra will be around for a while.

The network also continues the push to get the SPEED2.com broadband channel cleared in more subscriber homes. The target is for 30 million homes by summer. You can type in the web address and follow the links to see if your provider has the service. It is like ESPN3.com, a place for programming that cannot find a slot on the TV channel.

For those cable TV viewers expecting an episode of Inside NASCAR on Wednesday night, things have changed. "Showtime Suspends NASCAR TV Show" was a recent post that documented the fact that the post-Daytona show was it until September. Neither Showtime or the NASCAR Media Group will explain, but money appears to be the issue. Click on the column title to read it in full.

Despite having the cash, Showtime was a foolish location to put such a large amount of fresh NASCAR TV content every week. The audience was tiny and the fact remains that only ESPN2 and SPEED have weekday NASCAR TV review or preview shows. It would have been nice to have TNT or another basic cable network host a weekly NASCAR show.

Over on the new NBC Sports Network, the struggle continues to get a place for NASCAR in the daily 6PM hour of sports news and interviews called NBC SportsTalk. Marty Snider appeared after Daytona for a wrap-up, but has not been seen since. NBC either needs to jump in the pool or get out.

As NBC continues to struggle with the reality of appealing to cable TV viewers, ignoring a major professional sport is perhaps not the way to go. There are plenty of reporters and journalists available to update NASCAR after a racing weekend.

We will add any breaking news to this post, in the meantime please feel free to comment on any of these topics. To add your opinion, just click on the comments button below. Thank you for taking the time to stop by The Daly Planet.