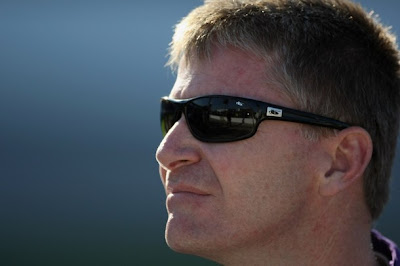 He might not have the volatility of Tony Stewart or the youthful enthusiasm of Kyle Busch. He does not have the swagger of Clint Bowyer or the fan base of Dale Earnhardt Jr. The only thing Jeff Burton has is experience and momentum.

It has taken the NASCAR TV networks a while to warm-up to the fact that Burton is here to stay in this season's Chase for the Championship. Sunday is a good example of how SPEED and ESPN/ABC have begun to integrate Burton into the weekend coverage.

He will be a live guest on SPEED's RaceDay at 11AM. That show hits the air right after ESPN2 does a full hour of NASCAR Now at 10AM. There is little doubt that Burton will be featured by host Nicole Manske on that program as well.

SPEED recently had Burton on Trackside and ESPN had him stop-by the Infield Pit Studio to chat. On Sunday, after running the entire Martinsville race, Burton will be Dave Despain's guest on Wind Tunnel. That might be the only time fans may have the opportunity to ask Burton their own questions on television.

The coverage of NASCAR began by both ESPN and SPEED back in February. Burton was not even a blip on the radar. Then, the Toyota era of Kyle Busch exploded and Burton faded even further out of range. The TV networks tried to keep Jimmie Johnson, Carl Edwards and Dale Earnhardt Jr. in the picture, but the dominance of Busch and JGR made it hard to do.

When the networks talked about Richard Childress Racing, it was usually Clint Bowyer or Kevin Harvick who were the topics of conversation. How did race fans remember Burton? He was the nice guy in the commercial driving so slow his kids were embarrassed.

As The Chase unfolded, there was almost a sense of loss on the part of the NASCAR on ESPN team as Kyle Busch began to fade. The network tried hard to keep Johnson and Edwards front-and-center, but once again reality re-wrote the ESPN script.

It was Greg Biffle who grabbed the early publicity. A regular on SPEED's This Week In NASCAR, Biffle has finally been mellowed by marriage and seems happy to just be in the running. For SPEED viewers, Biffle was already someone they knew quite well. Now, it seems to be Burton's turn in the spotlight.

In a very difficult time for the sport and the country in general, Burton may be just the "face" that NASCAR needs in front of as many TV cameras as possible. As the unofficial mayor of the Sprint Cup garage, Burton has been the thoughtful man behind many ideas that ultimately resulted in change in the sport.

As NASCAR fans watch the Sunday racing TV shows unfold, it will be Burton and his personality of quiet dignity and good family values that is seen nationwide. Should he come away from Martinsville with a strong performance, Dave Despain and Wind Tunnel may wind-up with a much more interesting interview than they originally imagined.

The one missing component that the TV networks have yet to show is an interview with Burton's older brother Ward who has a long NASCAR history. In the past, these two made quite a pair when interviewed together. Jeff was often referred to as Ward's translator. Perhaps, Despain and his staff might dial-up Ward on Sunday night and add that missing piece of the Burton puzzle.

So, with only five races left in the season, fans should see a lot more of Burton on Sunday then they normally would. How all this media exposure will affect him both on and off the track will be something to watch over the next month.

The Daly Planet welcomes comments from readers. Simply click on the COMMENTS button below and follow the easy instructions. The rules for posting are located on the right side of the main page. Thanks for taking the time to stop by.
Posted by Daly Planet Editor at 8:28 PM 19 comments: 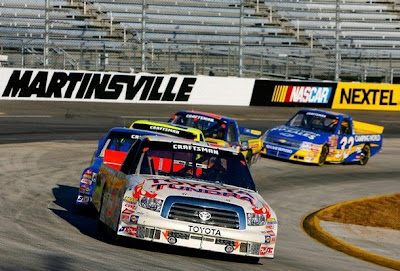 Krista Voda kicks things off at 2:30PM with The Set-Up show on SPEED. This thirty minute pre-race show mixes pre-produced features with interviews and news items.

Rick Allen hosts the race coverage with Michael Waltrip and Phil Parsons alongside. Ray Dunlap and Adam Alexander are on pit road. This is a full field of 36 trucks.

Voda once again has a nice points race that is coming down to the final event in Homestead. This race is going to feature a wide variety of NCTS regulars, Sprint Cup drivers, one-time specials and some former Cup drivers who are looking for 2009 rides.

The trucks struggled to get teams to Las Vegas, but now are going to be alongside of the Cup Series down the stretch. That means Cup drivers crossing-over and racing in the NCTS. One big question is how many full-time NCTS teams are going to be able to tow to Phoenix in several weeks?

The pre-race will profile driver Timothy Peters and his low budget team that operates out of neighborhood garage. As TDP mentioned earlier, SPEED owes fans a clarification about why Johnny Benson's truck is without a primary sponsor this week.

Allen and his crew will have what has been one of the most action-packed short track events on the NCTS schedule to call. The final laps in the last truck race at Martsinville resulted in some bent sheet metal and some very hot tempers. They don't call this the "payback track" for nothing.

SPEED's NCTS coverage has been solid all season. This is once again the regular SPEED crew handling the production, so expect the focus on racing and the "old school" style of NASCAR TV. Parsons is the Dean of the truck series and his knowledge about the personalities involved from top-to-bottom is first rate.

It always works better for SPEED to have Waltrip in the booth when he is racing at the same track. He has a better perspective on what the track is doing and the issues that the NCTS teams are dealing with when he has experienced it first hand.

Martinsville is famous for a very tough pit road, so watch for early pit stops without changing tires and then a long run to the finish. Track position is everything and the beating-and-banging usually starts with less than fifty laps to go.

This post will host your comments about the pre-race coverage and the live race telecast on SPEED. To add your opinion, just click on the COMMENT button below and follow the easy instructions. The rules for posting are located on the right side of the main page. Thanks for taking the time to stop by The Daly Planet.
Posted by Daly Planet Editor at 1:38 PM 44 comments:

Tradin' Paint: Petty vs. Pemberton Round 2 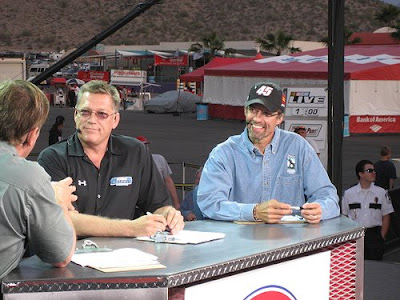 The recipe for interesting discussion is set for Saturday afternoon at 2PM Eastern Time on SPEED. While John Roberts will host Tradin' Paint, it will be Kyle Petty and Randy Pemberton who will be meeting-up again at a very tough time in the sport.

Pemberton is not one to mince words. This TV veteran has worked hard to get himself back into SPEED's NASCAR line-up and also emerge as a viable play-by-play announcer on DirecTV's Hot Pass.

Petty is a mess these days. On one side his charitable efforts and family life have never been more successful. On the other side, the new administration at Petty Enterprises has made it very clear they have little use for a 48 year old guy from Randleman, NC.

Petty is out of a ride, out of his grandfather's company and has no clear-cut plans for the remainder of this season or 2009. His saving grace is the fact he had a fantastic summer as the Lead Analyst on the TNT broadcasts and has been a consistently well-spoken panelist on Tradin' Paint.

On this Saturday, the non-superteams in the Sprint Cup Series are running for their very lives. The sponsorship dollars are tight and the American car manufacturers are basically running on empty. What NASCAR will put on the track in 2009 for the top-rated series should be an interesting topic.

As discussed on TDP in earlier posts, Craftsman Truck Series veteran Johnny Benson has just lost his primary sponsorship in the heart of the season. Bill and Gail Davis are now privately funding Benson's racing. How long that can last will certainly be a topic to be discussed even as it was avoided by SPEED on their NCTS coverage.

This post will serve to host your comments before, during and after the program. Sometimes, this series steps-up and delivers on its potential and sometimes Roberts turns it into a love-fest.

To add your comments, just click on the COMMENTS button below and follow the easy instructions. The rules for posting are located on the right side of the main page. Thank you for taking the time to stop by, this should be a fun show to watch.
Posted by Daly Planet Editor at 11:31 AM 13 comments: