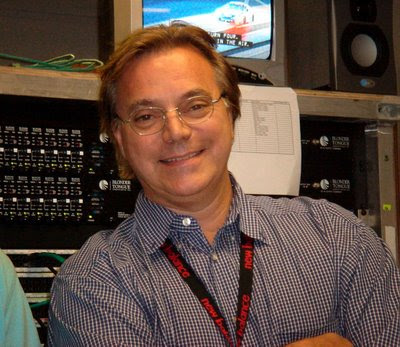 This is a re-post of the original column from December 23, 2007 that relayed the news about a Christmas tragedy that caught the sports TV community by surprise.

Amid all the current economic gloom and NASCAR struggles, it is this type of memory that serves to put things back in a realistic perspective very quickly. There are several worthwhile links in this column and many wonderful reader comments from last year to help us remember the late Ron Scalise.

Word started to circulate through the sports TV community on Friday morning. One of ESPN's best known "crew guys" had lost his life late Thursday night in a single car accident on a Connecticut highway.

Ron Scalise was only 54 years old. In his decades of hard work on the road, Scalise had become an audio legend. As we said many times this season, the ESPN audio of the NASCAR races was outstanding. It had to be if Ron was in charge.

Few people in the sports TV business had the single-minded focus of Ron Scalise. As a part of his drive, he met and befriended many young people who were willing to work hard and learn the audio side of the business. One outstanding testament to Ron's influence can be read by clicking here for Frenchy's blog. Make sure to read the comments.

In the middle of a screaming crowd at a Duke vs. Carolina basketball game, ESPN viewers could hear the players sneakers squeaking on the floor under the basket. When Tony Hawk or Shaun White tipped slowly off the lip and headed down the "vert ramp" at The X Games, all four wheels of that skateboard made their way right into your home.

In my ESPN NASCAR days, it was Ron Scalise at one analog audio board behind a glass window mixing the entire race by hand. He sat in the same part of the TV truck as the Producer, Director, Technical Director, Graphics Operator, Assistant Producer, and Associate Director. It made for cozy confines and rather stimulating conversation.

Ron Scalise won 14 National Emmy Awards and called Kenmore, NY his home. The sports TV world will go on, but it will never be the same. Wonderful tributes to Ron are contained at ronscaliseaudio.blogspot.com, a site that was set-up for that purpose.

Here are selected TDP reader comments from that day:

Mark said...
Ron has been a friend of mine for 20 years and I will miss him.

Mike Watt said...
I worked with Ron for many years when he ran The Nineteen Studio in Glastonbury and I steered him to ESPN more than 20 years ago. My prayers go out to his fiancee and his children at this heart-breaking news.

Terri Parsons said...
Ron has been a friend of Benny's and mine for many many years.He and Benny had been friends longer than the 16 years that Benny and I had been married.
My heart goes out to the Scalise family.

Denis Ryan said...
Ron was my boss, mentor and friend from the first time I worked at a NASCAR race in 1991. He instilled in so many of us the desire to bring racing fans the full excitement of NASCAR through sound and challenged us to constantly look for ways to make it better. Sleep well, brother. You will be missed.

Craig Bulmer said...
It was with shock and profound sadness that I learned of the sudden loss of our dear friend Ron Scalise while on location at the New Orleans Bowl last week.

My heartfelt sympathies go out to his family as we share in the loss of their beloved son, husband and father, and our long time friend so unexpectedly - especially at the holidays.

I had the good fortune to share some time with Ron just last month at the NASCAR Nextel Championship at Homestead, FL.

With the likes of Jeff Gordon, Kurt and Kyle Busch, Ward Burton, and Dale Jr. gunning their way past our infield studio, Ron was truly in his element listening to every little nuance of the mix that poured from our monitors.

Throughout it all, Ron remained a class act, a cool, calm and diplomatic leader, and one of the company's greatest ambassadors of goodwill and professionalism.

In addition to expressing my condolences to his family, it would be an honor and a privilege to share in any good work that may be pursued in tribute to his memory.

Fultzie said...
I knew Ron for many years and can truly say it was an honor working for him, and with him.... He always strived to be the best but being the best was never good enough... there was always something that could make things sound a little "sweeter". Or make the broadcast a little better. It was this quest for perfection which brought out the best in everyone and made audio crews try harder and harder to do things the right way. I was looking so forward to my 6th season of doing Winter and Summer X. I still am but it's going to be very different this year... I'm gonna miss the "What's up Fultzie , you all good"? Ron gave me many opportunites and it is much appreciated. I think I can speak for all of the A1's and A2's out there when I say a legend is gone, but will never be forgotten.
He will be missed. peace, brother.

dawna scalise said...
It is hard for me to even begin to express my gratitude for the outpouring of affection that you have all showed after this heart wrenching blow to our family this week. I knew my Ronny worked with many, many people and I have heard each and every one of your names at least once at one time or another, but I obviously never, ever imagined the actual impact he made.
Ron was my best friend, my confidant and the love of my life. I now understand how people can die from a broken heart. I shared Ron with his ever-demanding career and with all of you which made our life together extremely unconventional, as many of you can understand. However, two people could not have been more in love or more in tune with each other than my Ronny and me. In our minds, we were already married. My Christmas present to Ron this year was to change my last name to Scalise, which I did last Tuesday. I will now carry his heart in my heart and his name proudly for the rest of my life.
To all of you who work with ESPN or related businesses, I implore you to please be careful in your day-to-day traveling. We never think an accident will happen to us. Work hard, but rest just as much. Take care of yourselves and slow down.
I know that Ron has left many, many stunned and hurting friends and loved ones in his wake. We have all truly lost a great man and an amazing talent. Ron had many segments in his life and he shared a different talent and passion in each one. And, in each one he
left devastated friends and loved ones. To all of you I can only offer what’s left of my heart (which isn’t much). We will all mourn together and forever hold in our hearts what he personally brought to each and every one of us.

Thank you for joining us in taking a moment to remember Ron at this difficult time of the year. Comments can be added below.
Posted by Daly Planet Editor at 5:00 PM 5 comments: