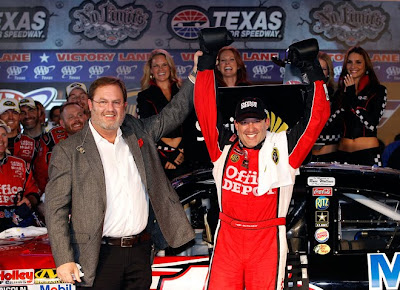 Update: Jury duty for me on Monday in Florida. Enjoy one more day of ESPN at Texas. There will be a new column up Tuesday early evening. Thanks all.

The story of Kyle Busch getting parked faded quickly after Busch silently took a seat on the pitbox and the JGR cars faded in the race. It was up to the action on the track to entertain and it was a tough sell.

Nicole Briscoe hosted a pre-race show that featured a 25 minute segment on all things Kyle Busch that was not interrupted by even one commercial break. Mike Helton appeared in the Infield Pit Studio and repeated his statements on parking Busch for the weekend.

All of the ESPN analysts weighed in on the situation. Pit reporter Dr. Jerry Punch interviewed Joe Gibbs and pressed him hard on one issue. Punch wanted to know if Gibbs would fire Busch if the sponsor, M&M's, demanded it. Gibbs talked around the question, but was clearly flustered on the topic.

Once the racing began, Busch walked out to the pitbox and never said a word. In typical style for the Cup cars at TMS, once things got strung out passing was at a premium. That made it tough for ESPN to follow any of the storylines.

The "hyper-tight" coverage began around lap 20 and continued for the entire race. Rather than chase racing, the slow and deliberate discussion of one or two cars racing began in typical style. The production choice was to zoom-in on a featured car or two and talk about it. Then, move on to another framed camera shot.

Allen Bestwick, Dale Jarrett and Andy Petree talked about everything under the sun but the pictures selected for them to discuss were nothing more than pre-selected topics mixed with commercials, features and promo's. It was rough to watch.

The race played out with few incidents, no major accidents and pit strategy playing the key role. Tight shots of the cars lap after lap removed the feel of speed and any perspective of where cars were on the track in relation to each other.

ESPN continues to have a great run in terms of technical issues, TV equipment and making good audio. Unfortunately, it all comes down to what the producer and director decide to let viewers see at home. ESPN has an approach and they have maintained it this season.

RaceBuddy at NASCAR.com offered a backstretch camera that provided many exciting moments in the race. Also offered was the white line that marks the race off pit road and six in-car cameras. While Michael McDowell was included, he faded from the start.

With 20 laps to go, Bestwick tried to recap the strategies unfolding on the track. The cameras just sat on Jeff Burton for lap after lap once it was revealed he was trying to nurse his fuel mileage to the finish. Even a late recap of the Chasers was framed so tight that it was impossible to tell where they were in relation to each other. Ultimately, Burton ran out and Tony Stewart won the race.

The finish line was framed with the famous "flying head" graphics swooping in as the cars ended as they started, in orderly fashion. Another fuel mileage race, this time toward the end of the Chase. A standard post-race show followed.

This post serves to host your comments about the ESPN coverage of the Sprint Cup Series race from the Texas Motor Speedway. To add your opinion, just click on the comments button below. Thanks for taking the time to stop by.