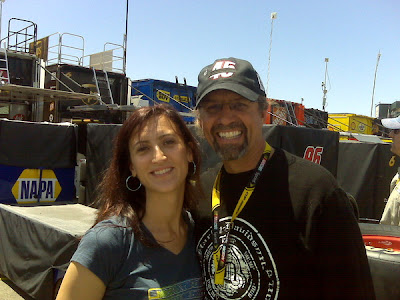 NASCAR fans only had a small slice of Kyle Petty this season as he worked on the TNT portion of the Sprint Cup Series races. Petty also appeared on SPEED, but unfortunately that was on the NASCAR Smarts trivia show with Rutledge Wood.

While the six races in the TNT package drew positive reviews, Petty stood-out for his plain-spoken opinions and his high level of interactivity with the fans. Petty was one of the first Twitter-friendly NASCAR personalities. That fit right in with the overall high-tech approach of TNT to NASCAR on TV.

Sunday, the Turner family of networks gives Petty an opportunity to extend his personal brand. CNN Headline News has been renamed Headline News (HLN) and the host of the morning show is named Robin Meade.

As the end of the year approaches, Meade is set to host a one-hour special featuring Petty and several other Turner network announcers. Charles Barkley is a TNT favorite on the NBA coverage and is well-known for his outspoken style and interesting life story. Dennis Eckersley is the MLB veteran known for his colorful playing days and controversial comments as an analyst.

This is an interesting project. Meade will let the panelists talk about various topics in the news during 2010, including Tiger Woods, Bernie Madoff and President Obama. During the Tiger Woods discussion, guest Spike Lee joins the panel.

Petty made himself known to a new group of NASCAR fans when he took over for Michael Waltrip on the SPEED program series Tradin' Paint. This hour long show matched Petty up with a NASCAR journalist or media personality for a discussion of topics in the news. Petty had monumental meltdowns with the likes of Bob Pockrass, Jenna Fryer and Randy Pemberton.

Unfortunately, SPEED cancelled that show and replaced it with NASCAR Smarts. This season, instead of talking about NASCAR topics, Petty was now guessing at trivia questions while Rutledge Wood made faces at the TV cameras.

Perhaps, this Sunday night TNT program titled With All Due Respect, might show executives at SPEED that Petty is worth involving in additional NASCAR programming for 2010. Petty made a guest appearance as a panelist on RaceDay, but did not participate in programs like Race Hub and This Week in NASCAR .

SPEED has not yet advised us as to whether or not the Monday night franchise will be back for next season. Michael Waltrip is now a full-time multi-car team owner and Jimmy Spencer never clicked as the third panelist. Petty might be an interesting anchor to a new line-up should TWIN return.

It should be interesting to see Petty working on topics outside the sport on TV. Meade is a veteran host and Petty's personality would seem to fit right in with both the group assembled and the program's format.

With All Due Respect airs at 10PM ET on Sunday, with a re-air on Christmas day at 6PM. Viewers can also catch it at 7 and 10PM on December 26th and 27th.

If you have some comments about Kyle Petty and his TV presence, feel free to offer them by clicking the comments button below. This is a family-friendly website, please keep that in mind when posting. Thank you for taking the time to stop by The Daly Planet.
Posted by Daly Planet Editor at 8:03 PM 26 comments: 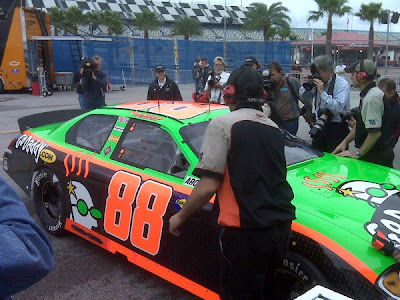 The ARCA Series has been nice enough to provide a live feed of the scanner chatter and the updated lap information as the teams practice in Daytona.

Danica Patrick has been featured during the morning session. Tony Eury Jr, Danica and their spotter have been busy making eight to ten lap solo runs. She is new to stock car racing, so she calls the Daytona tri-oval the "dogleg" and the Superstretch is the "back straight."

Patrick has been flat-out and searching for more speed and better handling. There are a ton of teams at Daytona and this afternoon ARCA will allow limited drafting practice. This will put Patrick in new situations and should provide a glimpse into her talent and patience.

Click here for the direct link to the ARCA website. Make sure you have the computer speakers turned up. The audio will come automatically when ARCA chooses to put a scanner online. There are no announcers, this is just raw team audio.

If you follow us at twitter.com/TheDalyPlanet, we will be on in the afternoon chatting and updating the information from this test session. If you are not yet on Twitter, please consider it.

As the afternoon session begins at 1PM, we will open up this post to comments. Thanks.
Posted by Daly Planet Editor at 12:11 PM 37 comments: