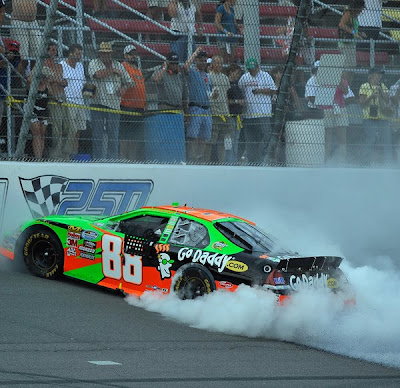 Saturday afternoon ESPN2 presented a special edition of the Nationwide Series race from MIS. The telecast featured four ESPN analysts in the broadcast booth and no play-by-play announcer.

Allen Bestwick hosted the telecast and handled many of the TV duties from the infield. Dale Jarrett and Andy Petree took the lead and created most of the play-by-play coverage. Rusty Wallace was talkative and outspoken. Ray Evernham stayed in the background, but added his opinion on lots of topics.

The weather was good, the pictures and sound worked very well from the big oval. Coverage featured full-screen coverage of green flag pit stops, a focus on selected cars and less of a pit reporter presence than normal.

This is your opportunity to offer your review of the ESPN2 coverage of the Nationwide Series race. Please include your reaction to the "Backseat Drivers" format and your personal level of enjoyment of this telecast.

To add your TV-related opinion, just click on the comments button below. This is a family-friendly website, please keep that in mind when posting. Thank you for taking the time to stop by and share your opinions.
Posted by Daly Planet Editor at 5:14 PM 78 comments: 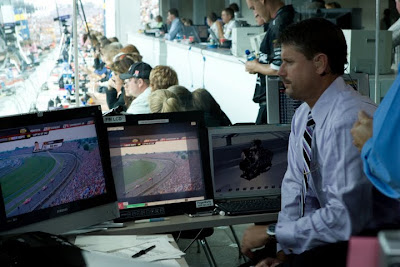 There have already been 22 Nationwide Series races on the ESPN family of TV networks. August is the heart of the NASCAR racing season. The primary TV team has been Jerry Punch, Dale Jarrett and Andy Petree along with ESPN's four pit reporters.

There have been some races where Rusty Wallace worked in the booth with Punch. Sometimes, the hilarious Randy LaJoie was added to the line-up when the series held a stand-alone race at a smaller track.

For the first time, TV veteran Marty Reid was brought in to call the Nationwide races down the stretch this year. Once ESPN took over the Sprint Cup Series, Punch was free from his Nationwide duties. Reid proved to be a major improvement.

This Saturday, ESPN will step away from the momentum Reid has built and change the telecast format completely. Promoted by the network as a "Backseat Drivers" telecast, this live race will have no play-by-play announcer.

Instead, the team of Dale Jarrett, Rusty Wallace, Ray Evernham and Andy Petree will be in the broadcast booth. The four analysts will make conversation among themselves while the race runs, relating stories about their past in racing.

The goal of ESPN is to let viewers hear the kind of spontaneous conversation and fun that the TV folks have when the cameras are off. Apparently, the ESPN VP of Motorsports has found that his announcers actually enjoy each other's company.

NASCAR fans know ESPN's telecasts as the most carefully scripted major sports coverage on national TV. Whether the network is setting up a driver for controversy or trying to cover a live race, the constant battle is between what ESPN wants to happen and what is actually happening. Script vs. reality has been ESPN's theme for three seasons.

Today's telecast may be a breath of fresh air. It may be a break from the embarrassing producing and ridiculous directing. What ESPN did to the Nationwide Series at Watkins Glen was amazing. Click here to review that disaster.

Everyone deserves a second chance. If the casual commentary is going to be mixed with coverage of the actual racing on the track, this telecast has a chance. If ESPN tries to force commentary into the coverage, NASCAR fans will run to the radio broadcast of the race as many do during ESPN's portion of the season.

Shannon Spake, Jamie Little, Dave Burns and Vince Welch will be on pit road. It should be interesting for these four to mix their reporting with the conversational style coverage coming from the booth. Welch has shaken off his embarrassing moment with JPM, but Spake is still mired in "how do you feel about that" questions while Little goes in for the kill on every issue. Her current interviewing technique seems to involve the invasion of personal space.

Rusty Wallace may have summed it up best. "I'm excited about it," said Wallace."And when it's all said and done, it's either going to work or won't work and we'll see what happens.

This post will serve to host your comments specifically on the TV coverage of the Nationwide Series race from MIS on ESPN2. To add your opinion, just click on the comments button below. This is a family-friendly website, please keep that in mind when posting. Thanks for taking the time to stop by.
Posted by Daly Planet Editor at 2:20 PM 357 comments: