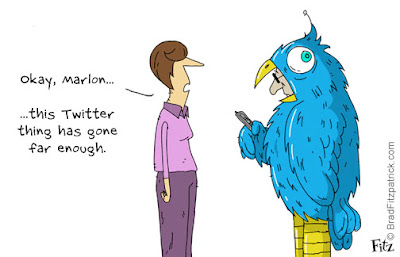 It certainly seemed like a good idea when it started. The text, picture and link service called Twitter seemed to be made for NASCAR.

Basically, Twitter allows users to quickly compose and send a message of about two or three sentences in length. Attached to these messages can be a host of elements like pictures, direct web page links and even real time GPS information.

All three of NASCAR's top series quickly established Twitter accounts and now provide continual streams of information about the races, teams and other NASCAR news. New groups of journalists, racetracks and teams joined the growing NASCAR on Twitter movement. Then, the flood-gates opened.

Suddenly, the word "NASCAR" started popping-up on official-looking Twitter accounts seemingly every day. It became apparent very quickly that Twitter does not police the use of the registered trademarks of sports organizations.

Now, Twitter is littered with the word NASCAR on all kinds of accounts. Users like @NASCAR_Nation and @Nascar_News simply re-publish original stories from actual NASCAR journalists and bloggers. These third-party NASCAR pretenders never offer an original word or thought, just use the copyrighted material of others without permission or consent. Amazingly, that does not seem to be a problem for Twitter.

Fans clicking on @NASCARSeries for information find themselves taken to a website for Empire Tickets. This is an example of the growing amount of Twitter spam. Fans are lured into using a source for NASCAR information and then are suddenly directed to either a commercial web page or infected with adware that stays on their computer.

Perhaps, most amazing is Twitter's seemingly total disregard for catching problem accounts at sign-up. There is one impostor Tweeting as @NASCARonESPN right now. One of his latest posts says it best. "Continued astonishment that ESPN hasn't requested return of this user name yet!" it declares.

One of the biggest re-publishers is @Racing_News. Without any original messages or content, this Twitter user has manged to attract over seven thousand followers. In reality, @Racing_News turns out to be KENR-FM, a radio station in Missoula, Montana. Each Twitter link is to a single page where the KENR-FM webmaster has gathered random NASCAR news from the Internet and simply re-published it.

If Twitter is serious about providing a real-time platform for communication, including sports, the company needs to re-think some issues. Currently, Twitter puts the burden of proving copyright infringement or impersonation on the complaining party. Moving to establish a stronger "gatekeeper" presence during sign-up is the only way to stop this problem before it gets out of hand.

Used correctly, Twitter can help NASCAR to share information directly with fans for the first time. The live updates from the tracks, from the public relations staff and from the TV networks are currently changing the way many fans get their information on the sport.

As we mentioned in an earlier post, TDP tweeted Kyle Petty while he was on the air with the TNT coverage from Daytona. We asked a question and Petty responded on TV within minutes. In the following commercial break, he wrote back and asked if he had answered it to our satisfaction. That is truly groundbreaking technology at work for NASCAR fans. And the best part is, there is no charge for Twitter and it is easy to use.

Click here for one of the best lists of NASCAR resources on Twitter. There are also links to other racing series for fans with a broader interest in motorsports. It should be interesting to see how Twitter reacts to these on-going issues over the next several months. If you are interested in more NASCAR information, try Twitter. We would like to know how you like it.

TDP welcomes your comments on this topic. To add your opinion, just click on the comments button below. This is a family-friendly website, please keep that in mind when posting. Thank you for taking the time to stop by The Daly Planet.
Posted by Daly Planet Editor at 12:05 AM 43 comments: