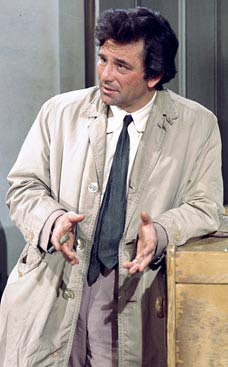 The chaos of Martinsville can be solved by only one man. Lt. Frank Columbo might be rumpled and slightly confused, but ultimately he can solve anything. This telecast requires some serious detective skills.

Chris Myers opened the show with Darrell Waltrip and Jeff Hammond from the new outdoor infield set positioned on the backstretch. The first thing that many viewers and even reporters at the track noticed was the colorful fans standing behind the announcers. After two segments, they mysteriously departed.

Waltrip and Hammond ran through the topics associated with the race. Hammond continues to roll his eyes at the antics of Myers and the comments of DW. Waltrip again delivered a "Revved-up" segment preaching the wonders of the sport this season.

Originally at Daytona the outdoor stage seemed to have some real meaning. Since then, it seems to be nothing more than a different location for the exact same show.

Mike Joy called the race with Waltrip and Larry McReynolds. FOX is repeating the same style of coverage in all areas. This is true in the booth and with the production. Waltrip dominated and when he speaks both Joy and McReynolds let him take the lead.

In this telecast, Joy took it all in stride and continually offered a ton of information despite the pictures on the screen. He kept filling in the details and updating the stories. If Joy was ever turned loose to generate some excitement like he used to do, it might be fun to watch.

The "hyper-tight" coverage continued with in-car cameras and tight shots dominating the race. While the booth was calling the action on the track, the director continued to offer forward looking in-car camera views as if they were a new angle for coverage.

Aerial shots were seen in transition and never on restarts. Digger kept a low profile. The scoring ticker seemed to be slower and fans emailed to say by the time it went through the field several laps had ticked by. Tough to use that technology as the primary scoring on a track like Martinsville.

An accident that ultimately brought out a red flag came about as FOX was showing in-car cameras. Replays told the tale and once again the production staff in the truck did a great job with using replays to show all the angles. Never a problem with that in FOX land, they get a lot of practice.

The race settled down with less than one hundred to go and FOX finally provided a through the field style update using the best pit reporters in the business. Ironic that the FOX group is the best and perhaps used the least on the air.

Over the years, the various TV networks that have televised races from Martinsville relied on wideshots that showed significant portions of the field. The simple reason was that incidents happen quickly and it was easier to replay the tight shots and in-car angles. This approach emphasized the racing.

FOX proudly offers just the opposite. Almost every incident was replayed and information relayed from reporters at the track like pit road penalties was updated by replay. The emphasis from FOX is on making pretty pictures for HDTV viewers.

Ultimately, the race ended with a great story of Dale Earnhardt Jr. getting some quality TV time in the lead. Several NASCAR stars fighting for the win at the end is a story that has played out several times this year.

The race to the finish line was again confusing with FOX trying to show the "drama" of the winner. This time, they had to actually go back and replay the finish of the rest of the lead lap cars. This final lap chaos is typical this season.

This post hosts your race wrap-up comments on the NASCAR on FOX coverage of the Sprint Cup Series racing at Martinsville. To add your TV-related opinion, just click on the comments button below. This is a family-friendly website, please keep that in mind when posting. Thanks for stopping by.