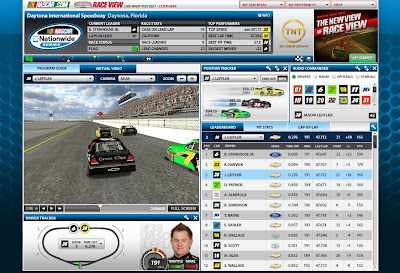 Sometimes, things just happen right out of the blue in NASCAR TV/media land. While on a conference call listening to ESPN preview their Sprint Cup Series coverage Tuesday afternoon, some information arrived from Turner Sports.

This season, fans of the Nationwide Series have been able to listen to free team scanners on select races provided by Nationwide through the NASCAR.com website. Turner is now expanding its services for the series with the introduction of the TrackPass RaceView feature.

Shown in the picture above, this NASCAR.com offering has been a paid service for Sprint Cup Series fans for several years. Now, NASCAR.com is offering a Nationwide Series version for free during three events this season.

Saturday night at Indy, August 13 at Watkins Glen and September 9 in Richmond there will be lots of free online bells and whistles. RaceView offers virtual video on every entry in the field, including six camera angles on each car.

There is also in-car audio, position tracker, live telemetry and real-time race statistics for the entire event. RaceView has always offered a ton of information and this Nationwide Series version is no exception.

"Research has shown that RaceView complements the television viewing experience," said NASCAR's Director of Digital Media John Martin. "We’re excited to support ESPN’s broadcast of the NASCAR Nationwide Series. We continually look for ways to provide fans with the content they want to see, where they want to see it."

Also good news for online NASCAR veterans is that this Nationwide Series version is designed to operate on all current editions of Safari, Firefox and Internet Explorer running Adobe Flash Player.

Hopefully, a positive response to this may allow for it to expand next season. Perhaps, we may even see a RaceBuddy-style live video application like fans enjoy currently for the Camping World trucks. It's been a big boost for that series.

We all know that the Nationwide Series is in the middle of an identity change with new rules for the driver championship and Sprint Cup Series cross-over drivers. Carl Edwards has already announced he is going to scale back his Nationwide Series efforts for 2012.

Supporting this series with additional online components will just help with the exposure and interactivity for fans who desire more interaction with live sports. ESPN's television production will be unaffected as that network continues to telecast the remaining races.

If you have any questions or comments about this topic, just click the comments button below to add them. We appreciate the interaction with Turner Sports and can probably answer questions about RaceView in a timely fashion. Thanks for taking the time to stop by The Daly Planet.