Saturday Night In Sparta On TNT 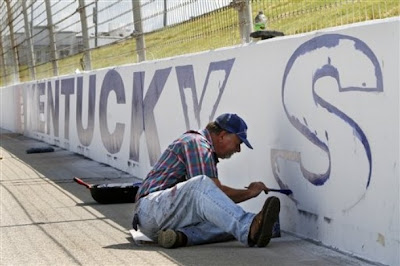 Kentucky Speedway was a traffic mess last season and that grabbed the headlines after the Sprint Cup Series race. This week, the track has already played host to both the Camping World Trucks and the Nationwide Series without the mention of any traffic or parking issues. Both of those races showed a bumpy track with multiple grooves that made it a challenge for crew chiefs to make the right changes during the race.

TNT returns after a Sonoma outing that saw the commercials become a focal point for criticism. Click here for a link to Cheryl's website called CawsnJaws where she documented the commercial elements of the race. The bottom line is that in a total of 3 hours of racing coverage there were 56 minutes of commercials. On a road course like Sonoma and with few cautions, the result was rough to watch.

This Saturday night, long green flag runs may produce the same result. Luckily the NASCAR website offers the online RaceBuddy to keep the live video going during commercial breaks. There is no actual feed of the race itself, only some in-car cameras and two isolated cameras usually showing the backstretch and pit road.

This season the radio coverage of the Sprint Cup Series races has also been made available online for free. Doug Rice and the PRN gang will be calling the action and the streaming is available at the goprn.com website. This has been a great asset for fans and there is little doubt next season will see even more digital friendly features.

TNT's pre-race Countdown to Green show at 6:30PM this week will have a feature on Denny Hamlin's sponsor-related trip to Alaska. Kasey Kahne will be the guest on the infield set. The "NASCAR Generations" feature will return with Jimmie Johnson, Bill Elliott and Ned Jarrett. The topics this week are driver superstitions and fears.

Adam Alexander does double-duty this season for TNT. He hosts the pre-race show with Kyle Petty and Larry McReynolds and then calls the race with Petty and Wally Dallenbach Jr.  McReynolds stays in the infield while Marty Snider, Ralph Sheheen, Chris Neville and Matt Yocum handle the pit reporting duties.

For those asking about TV ratings for the TNT races, click here for Jayski's season-long ratings chart. The TNT races to date have averaged a 3.3 Household Rating. That puts the viewing numbers up about 6%. No doubt Dale Earnhardt Jr. in contention at Michigan did not hurt that total.

Saturday's NASCAR TV starts with NASCAR Now on ESPN2 at 12PM Eastern. This is the one hour Sprint Cup Series preview show. SPEED gets into the act at 4PM with a thirty-minute edition of SpeedCenter. That is followed by the two-hour RaceDay program featuring Darrell Waltrip, Jeff Hammond and Kenny Wallace. John Roberts hosts that show with Wendy Venturini, Matt Clark and Rutledge Wood as field reporters.

In terms of post-race, TNT moves the extended post race show to the RaceBuddy online window. That can be accessed through NASCAR.com right off the front page. SPEED has been doing a solid job with the Victory Lane show and that is scheduled for 11PM ET, but will be held until the Sprint Cup Series race is over should it run long. The move to air this show late night after the live Saturday races is appreciated.

There will be a post on this page for your comments after the race. We use the #TDP1 hashtag on Twitter during the race to chat about TV and media topics. Please join us. Twitter.com is free, easy to use and there are tons of NASCAR personalities and media folks on the service. We welcome your comments during the TV day on any of the NASCAR TV shows or media topics. Thanks for stopping by.
Posted by Daly Planet Editor at 2:20 AM 29 comments: