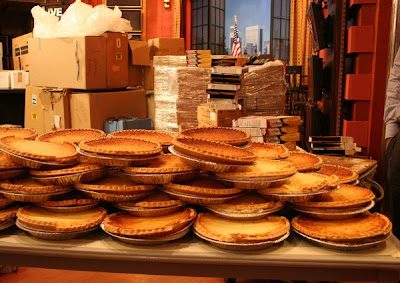 We have tried to put together a full list of all the media appearances by the 12 Chase drivers in New York City. Things start on Wednesday night with some TV.

First will be Ryan Newman, Kasey Kahne and Carl Edwards on the Late Show with Jimmy Fallon. The Wednesday program airs at 12:35AM ET, but check the NBC local listings for the time in your area.

Here is the rest of the official info for Thursday:

FOX & Friends: Jeff Gordon and Mark Martin will be appearing outside with a show car at 7:35 am.

Good Morning America: Tony Stewart and Carl Edwards will be on this morning show also with a show car at 8:30 am.

LIVE with Regis & Kelly: It is Guinness Book of World Record Week and six drivers will start by talking to Regis and Kelly about the Chase, the season and the upcoming race at NH. They will then join over 250 fans outside on the street for the World’s Largest Custard Pie Fight. For every pie thrown a donation will be made to Meals on Wheels. Those are the pies shown above, show airs at 9AM ET but check local listings.

ESPN First Take: Tony Stewart and Jeff Gordon will both be on ESPN’s morning show via satellite. Program begins at 10AM ET on ESPN2.

NASCAR Now: Jeff Burton will be the co-host with Mike Massaro in Bristol, CT. This program has now been confirmed to have expanded to 90 minutes and will begin at 5PM ET. Interviews will include Roush Fenway drivers from Fenway Park in Boston and other Chase drivers from media day in NYC. This show will also re-air at 10PM Pacific/1AM Eastern.

SiriusXM Studios: Four drivers will be making their way to the studios: Kasey Kahne, Ryan Newman, Greg Biffle and Kurt Busch. Tradin' Paint will be broadcast from 12-3PM ET from the Hard Rock Cafe and will feature the remaining eight drivers.

The Bob and Tom Show: Greg Biffle will be a guest at 9 a.m.

Dan Patrick Radio Show: Tony Stewart will be calling into the show at 9:45 a.m.

CW Morning Show: Brian Vickers will be appearing on this local New York City morning show tomorrow morning at 7:15 am. The Sprint Cup Series trophy will also be on set.

Good Day NY: Ryan Newman (between 9:15 and 9:45) and Greg Biffle will be appearing at this local FOX morning show. They will be outside by the Sprint show car.

WSCR Chicago: Carl Edwards will be a guest at 4 p.m

Thanks again to the NASCAR PR staff for the info. This post will serve to host your comments as you watch and listen to all the TV and radio appearances of the 12 drivers on Wednesday and Thursday.

To add your opinion about these programs, just click on the comments button below. This is a family-friendly website, we would ask that you keep that in mind while posting. Thanks for taking the time to help us out with your reporting skills!
Posted by Daly Planet Editor at 7:00 AM 33 comments: