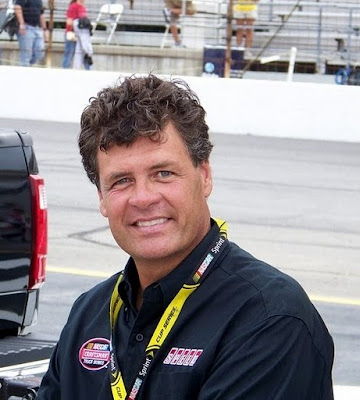 Michael Waltrip has one of the highest media profiles in NASCAR. He is a multi-car owner in the Sprint Cup Series. He is an analyst for SPEED on the Camping World Truck Series telecasts. He is a panel member of Inside NASCAR on Showtime.

Sunday night, Waltrip took the time through a series of Twitter messages to respond to fans upset with NASCAR's late race actions in Michigan. A late caution for debris that was never shown on the TNT coverage tightened the field after Denny Hamlin had worked hard to build up a lead.

In Victory Lane and on several TV shows, Hamlin had expressed an acceptance that NASCAR had thrown the caution simply to bunch up the field for a more exciting finish. Some fans reacted with anger as NASCAR has continually denied ever putting out a caution flag for anything other than valid reasons. Waltrip has his own ideas on just what defines "valid reasons."

"If you don't agree you probably don't feel sorry for that pitcher who got robbed of a perfect game because MLB is stuck living in the past."

"I'd bet that if you were offended by my opinion in addition to not feeling sorry for that pitcher you probably haven't bought a ticket to a race lately. As the kids say these days....'Jus saying'. The world is a changing."

The world may be changing for Waltrip, but his statement reflects a radical departure from what NASCAR has been saying publicly for decades. Protecting the integrity of the racing has been one element that has kept NASCAR in the ranks of sports like the NFL and away from the perception that stock car racing is professional wrestling on wheels.

One significant influence on the caution flag decisions this season may be television. While there might be one hundred thousand fans in the stands, there are millions watching at home. NASCAR suffered last season from boring races where aero issues handed the car out front the win time and time again.

This season, we have NASCAR Race Control much more active with decisions in races that seem to be driven by television. Key drivers are often on the verge of being lapped when debris suddenly appears on the proverbial backstretch. Slow cars heading to pit lane bring out the caution flag when the field has become strung-out in the race.

It seems ironic that Waltrip used Twitter to send his caution flag manifesto. This form of instant communication allows media members, fans, teams and even NASCAR to maintain constant contact during the races.

These days when NASCAR throws a caution for debris, fans in the stands use Twitter to instantly verify if there is a problem or perhaps the "Waltrip rule" is now in effect. Twitter even lets them send pictures of the offending spring rubber, body panel or tire liner.

This is certainly going to be an interesting topic at the next Sprint Cup Series race. If NASCAR follows the Waltrip example and admits to throwing a caution flag at Michigan to spice-up the finish, it will open a Pandora's Box for the fans.

Now, late in every race the fans of the drivers not at the very front of the pack are going to be expecting a "show caution" to get that exciting double-file restart for TV and set-up the possible green/white/checkered scenario.

Where do you come down on this topic? Is this old school vs. new school fans as Waltrip suggests? Is this an integrity issue or should some fans just stop taking NASCAR so seriously? Should using caution flags to set-up an exciting finish for TV become a regular practice for the sport?

To add your opinion on this topic, just click on the comments button below. This is a family-friendly website, please keep that in mind when posting. Thanks for taking the time to stop by and leave us your views on this topic.
Posted by Daly Planet Editor at 9:00 AM 91 comments:

Your Turn: Sprint Cup Series From Michigan on TNT 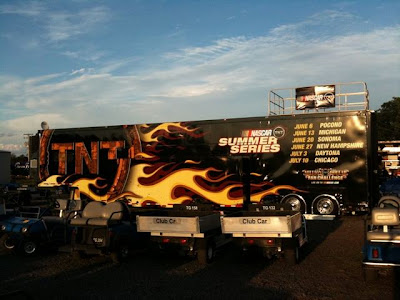 This was race number two for the NASCAR on TNT gang. Lindsay Czarniak opened the show from Michigan as she hosted the pre-race Countdown to Green show.

Kyle Petty and Larry McReynolds joined Czarniak for the show. TNT profiled the late Dave Allison in the Pride of NASCAR series and Wally Dallenbach Jr. offered another installment of Wally's World.

There were no technical difficulties with this telecast and weather did not play a factor. The race went quickly and finished earlier than scheduled. TNT provided a very complete post-race show. Update 4:05PM: Much to our surprise, TNT left the post-race show and asked viewers to go to NASCAR.com to see the rest of the coverage. There was still 25 minutes left in the scheduled timeslot.

This is your opportunity to offer your own post-race TV wrap-up of the TNT telecast. This is the weekly post that is most read on this blog. Your comments count.

To add your TV-related opinion, just click on the comments button below. This is a family-friendly website, please keep that in mind when posting. Thanks for taking the time to offer your comments.
Posted by Daly Planet Editor at 8:30 AM 54 comments: