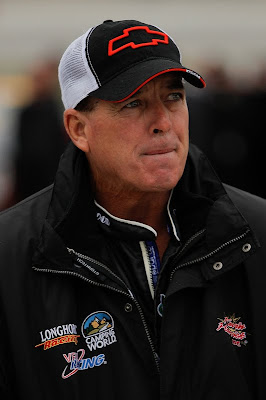 The truckers are sharing the bill with the IndyCar set and word this afternoon is that traffic at the track was light. We will see how many folks show up for this night race.

Krista Voda kicks things off with the pre-race show at 7:30PM. Rick Allen, Michael Waltrip and Phil Parsons follow with the race call at 8PM. Ray Dunlap and Hermie Sadler are on pit road.

The trucks are a comfortable TV package. Keep your eyes peeled today for some new names and faces as this stand-alone race has given some new teams an opportunity to give it a go on the big track.

There is not much to say about this one except that sometimes a field like this leads to good racing. This track might be a bit too big for that, but we will all find out together.

This post will serve to host your comments on the Camping World Truck Series telecast on SPEED from Kentucky Speedway. To add your TV-related comments, just click on the comments button below. Thanks for stopping by! 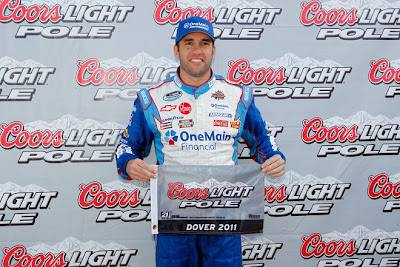 Once again this week, the normal college football scenario is in place. Once the noon ET game is over, NASCAR will start on ESPN2 from Dover.

Nicole Briscoe will have Rusty Wallace and Brad Daugherty in the Infield Pit Studio for the pre-race show. Daugherty has reduced himself to a cheerleader this season while Rusty continues to be conflicted between his own personal feelings on topics within the sport and his desire to function as a TV analyst.

It's Marty Reid with Dale Jarrett and Andy Petree in the TV booth to call the race at 3:30PM ET. Reid is not having a very good time since being removed from the Sprint Cup Series package in favor of Allen Bestwick. NASCAR is not his sport and it's very clear ESPN made the right move.

Nationwide Series qualifying was carried on SPEED earlier in the day and SPEED analyst Elliott Sadler is on the pole. The field is diverse and this might be the best race of the weekend. Lots of different agendas at work on the track.

Dr. Jerry Punch, Jamie Little, Vince Welch and Dave Burns are on pit road. This group might be busy as Dover has a nasty reputation of big wrecks in the Nationwide Series races. There is no room to spin into the infield and no mercy on the highbanks.

ESPN continues to offer what they designed several years ago and that is "hyper-tight" coverage. Accidents and passing on this track happen so quickly TV networks traditionally kept the camera angles wide and simply worked to cut the cameras ahead of the pack. It should be interesting to see if ESPN uses the coverage today as a test for Sunday's Cup production.

This race is available to Time Warner, Bright House and Verizon FiOs users through the Watch ESPN app and there are free team scanners for fans at the NASCAR.com website.

This post will serve to host your comments on the NASCAR on ESPN coverage of the Nationwide Series from Dover. To add your TV-related opinion, just click on the comments button below. Thanks for taking the time to stop by The Daly Planet.