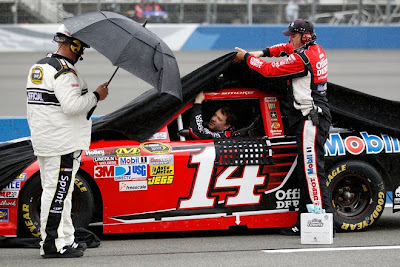 It was tough from the start and ended with a whimper. FOX came on the air after two hours of RaceDay on SPEED and one hour of NASCAR Now on ESPN2. Even with a three hour lead-in, the reality of racing on this wide track was clear.

The Waltrip brothers started the day with another pre-race show where opinions were being expressed only from a driver's perspective. There is a reason that the TV networks normally have a former crew chief on the panel. The Waltrip brothers simply don't mesh in the infield like they did in the TV booth for SPEED last year. It should be interesting to see if something changes soon.

Mike Joy tried his best to make something from nothing, but the TV pictures did not help. On a wide track with little racing but high speeds, FOX did not use in-cars or focus on technology or even tell stories. They just made it miserable.

Lap after lap of nothing from the TV crew but boring pictures of strung-out cars. Little sense of the building rain drama, no crew chief interviews and nothing to pump-up the telecast for TV viewers.

The energy level of the overall TV crew was low from the start and that is not the way it has been in the past for FOX. This race used to be all about the promotion of movie and TV stars and the best opportunity for FOX to show-off its West Coast presence. None of that was in place on this telecast.

Fundamentals like passes for the lead, pitstops and even the red flag being displayed were missed. As the cars came around under the caution for rain, Tony Stewart's fake out move was thankfully caught by Mike Joy as it happened. Once again, FOX showed us the important moments of this race through replays.

Jeff Hammond was once again a square peg in a round hole. His roving reporter cut-ins are taking away from the pit reporters and in this race even covered a key pass for the lead. There is simply no way to insert him under green and not take away from the live telecast. The producers have not figured out how to make him fit.

There just isn't a lot to say about this race on TV. Perhaps you can help by giving us your opinion of this effort by the NASCAR on FOX team. In the end, Dick Berggren interviewed Tony Stewart and the day was done.

To add your opinion to this conversation, just click on the comments button below. Thank you for taking the time to stop by The Daly Planet.