NASCAR On TNT Returns At Pocono 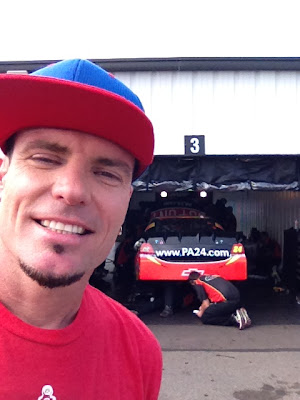 Pocono is sometimes in need of a little excitement, so this year NASCAR brought in Vanilla Ice to drive the pace car. What could go wrong?

TNT returns with some familiar faces and one very interesting decision. Instead of hiring a host for the infield stage, the network chose to use Adam Alexander to host both the one hour Countdown to Green show and the live race. Previous host Lindsay Czarniak left and is a studio anchor for SportsCenter on ESPN.

Alexander will be joined in the infield by Larry McReynolds and Kyle Petty for the pre-race show. He and Petty will then move upstairs while McReynolds moves into a new Tech Garage setting. Wally Dallenback Jr. will be the third man in the TV booth as he has been from the start of the TNT run.

On pit road for the second season will be Chris Neville, best known for his sports car coverage on SPEED. Veterans Ralph Sheheen, Matt Yocum and Marty Snider round-out the pit reporter corps.

TNT brings RaceBuddy back to the Sprint Cup Series. The network will also be integrating social media into the telecasts this season. Twitter looks like it will be the emphasis. The pre-race show will have several features including one with Jimmie Johnson, Bill Elliott and Ned Jarrett talking about NASCAR issues.

We will be using the #TDP1 hashtag on Twitter to host a live stream of chat that has all kinds of media and NASCAR personalities involved. If you are not on Twitter, come on over and give it a try. We welcome your comments here and will post a full race TV review for your comments once things are done at Pocono.

As always, thank you for taking the time to stop by The Daly Planet. Comments may be moderated prior to posting.
Posted by Daly Planet Editor at 11:26 AM 25 comments: