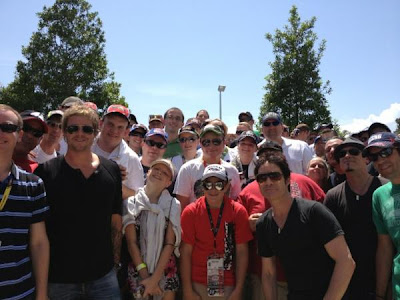 Breaking News: AJ Allmendinger has failed a random drug test. AP reporter Jenna Fryer reporting Allmendinger was the random drug test after Kentucky and was informed today he failed. No substance was disclosed. At 6PM, NASCAR confirmed that Allmendinger's "A" sample of urine tested positive for a substance banned by the sport. He has the right to request the "B" sample be tested without question. More as it happens.....

It's a hot day in Daytona. Before the race, NASCAR fans who use Twitter gathered for a pre-race meeting called a "tweet-up." It's an opportunity to speak with many media members and sometimes special guests who attend. This time, rock group Train showed up after flying into town to perform in the pre-race show. Classy move on their part on a very hot day.

The executives at Turner have decided to simulcast the race tonight on TruTV along with the primary telecast on TNT. Tonight is the "Wide Open" coverage that features all the national commercials run in a side-by-side format that lets TV viewers see the race. The only time full-screen commercials appear is when the local cable TV companies go to break.

It was a tough week in Kentucky. Lots of commercials, long green flag runs and a rather lazy performance from the trio in the TV booth led to a lot of fan feedback. Little of it was good. Tony Stewart will join Adam Alexander, Kyle Petty and Larry McReynolds in the TNT infield stage before the race.

The Countdown to Green show has been solid this season as it uses the pit reporters, a featured interview an several edited features including the new "NASCAR Generations" discussion. Ned Jarrett, Bill Elliott and Jimmie Johnson talk about topics in an informal setting.

Alexander and Petty move upstairs to call the race with Wally Dallenbach Junior. This trio is very different and while Petty continually offers opinions, Alexander does not call the race in the traditional manner and Dallenbach is long since removed from the sport. It's a combination that rarely offers excitement.

The pit reporters have been solid. Chris Neville, Marty Snider, Ralph Sheheen and Matt Yocum are veterans who have worked in many different roles in the TV world. This crew works hard to supply information and excitement but often when Alexander returns the conversation quickly returns to low-key.

If there was ever a combination of ingredients that could get TNT back on the right track, Daytona can provide it. If the racing is sharp then fans can tolerate a lot. If long green flag runs become the order of the day, then expect to hear the groans begin. As much as TV can surround an event, it is the action provided by the athletes that dictates the excitement level.

We are going to be live tweeting the race on Twitter using the #TDP1 hashtag. Please consider joining us. Twittter is easy, most NASCAR personalities are on it and we talk with media members and fans about the TV coverage as it happens. There will be a new post up for your comments after the race, in the meantime please feel free to leave any opinions on this page about the TV coverage today.

Comments may be moderated prior to posting, thanks for dropping by The Daly Planet.
Posted by Daly Planet Editor at 5:11 PM 91 comments: 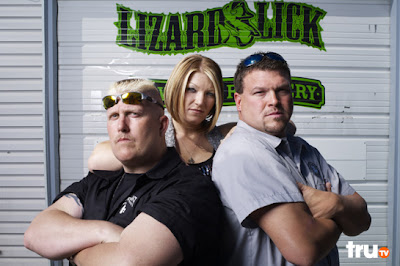 Of course Lizard Lick Towing is fake. Ronnie Shirley and his wife Amy were originally cast on the reality TV show Wife Swap. Once the TV producers saw the interesting elements in their lives, the shift was on to build a reality show around these colorful characters. TruTV calls the mixing of real people with scripted action "actuality." That is an admission that acting is at the core of the series.

This approach of blurring reality has been a gold mine for TruTV and the parent Turner organization. A significant number of TV viewers could care less about what is real and what is not. They just want to be entertained.

Now, a new programming element is on the way to the loyal viewers of "actuality" series like Operation Repo, South Beach Tow and Hardcore Pawn. It's NASCAR's Sprint Cup Series.

Saturday night TruTV will simulcast sister network TNT's live presentation of the Coke Zero 400 from Daytona. The simulcast will include the pre-race show that features the musical group Train. Also, Turner-owned HLN will have morning anchor Robin Meade hosting interviews and then singing the National Anthem.

Veteran fans may remember it was an appearance by Carl Edwards on HLN's Morning Express program weeks ago when he "asked" if Meade could come to Daytona and sing the anthem. It seemed ironic that ESPN's rising on-air star Edwards was on a Turner network participating in his own "actuality" moment.

The Daytona race brings the annual "Wide Open" coverage that replaces the vast majority of the commercials with side-by-side style commercial messages, additional advertising logos and graphics within the race itself. This change comes on the heels of perhaps the worst NASCAR commercial disaster in the past five years.

The memories of Pop Pop and Junior wrestling over the side-order menu from Kentucky Fried Chicken is permanently burned into the brains of many NASCAR fans. One-third of the actual time of the race was covered by commercials. What made it worse was the exact same commercials repeated endlessly.

Throw in one of the tracks on the "cookie cutter" list and a less than inspired effort from the TV booth and the result was a fan backlash that spread through social media and NASCAR websites. The TNT package is just six races and the results have always been mixed. This time, the mixture has been rather potent.

Daytona offers the network an opportunity to use the holiday, the setting and the racing to escape the past few weeks. Meade is a well-known on-air presence and has a great relationship with the armed forces through her HLN features. Daytona is the right place for the sport to put on a good show and all signs point to the most popular driver being in the mix. A more race-focused effort from the booth would be a topper.

There are no different production elements in the TruTV simulcast. What the folks are Turner are doing is just exposing a live sport to a new audience. Those loyal TruTV viewers who do not watch sports get an exciting race in primetime on a Saturday night. TNT's regular programming is very different from TruTV and this is a positive move.

Tony Stewart will be the special guest on the TNT set. Adam Alexander and Kyle Petty will once again do double-duty working on the pre-race show and then moving upstairs to call the action. Larry McReynolds will remain in the infield as Wally Dallenbach Jr. joins Petty and Alexander in the booth.

This is the big one for the NASCAR on TNT package. While the Lizard Lick gang showed up for the first TNT race, there is nothing to indicate that they are headed for Daytona. But as we all know, anything can happen because it's actuality, not reality.

We welcome your opinion on this topic. Comments may be moderated prior to posting.
Posted by Daly Planet Editor at 2:00 PM 22 comments: