Day Two Of Your Turn: Sprint Cup Series On ABC From Richmond, VA 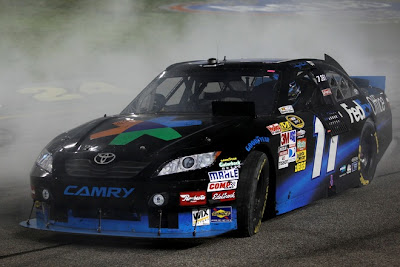 What a night! College football covered portions of the pre-race show and then the race turned into a parade of commercials from start to finish.

Allen Bestwick had only a short time to get comments from Ray Evernham, Rusty Wallace and Brad Daugherty from the Infield Pit Studio. Tim Brewer was in the Tech Garage.

It was the "A Team" of Marty Reid, Dale Jarrett and Andy Petree who called the race from the TV booth. Down on pit road were Dr. Jerry Punch, Jamie Little, Dave Burns and Vince Welch.

The race started on time with all the TV markets except one on time for the start. ABC was into commercial before lap 8 and this was the theme of the night. At the track, the crowd all waved American flags on laps 9 and 11 in a tribute to the fallen US citizens of the terrorist attacks. Despite the fact that the TV guys knew about it, they went to commercial.

The rest of the telecast featured only one rain delay. There were no technical issues and the pictures and sound were solid.

Update: Fans of Marcos Ambrose and other top ten drivers filled my email after the checkered flag. ESPN's director chose to show only Denny Hamlin finish the race and showed no other lead lap cars finish. This despite the fact that drivers were racing not only for the finish of the race, but for place in the Chase for the Championship.

This post is our opportunity for you to offer a post-race wrap-up of the ESPN on ABC coverage of the Sprint Cup Series from Richmond. To add your comment, just click on the comments button below. This is a family-friendly website, please keep that in mind when posting. Thanks for stopping by.
Posted by Daly Planet Editor at 12:30 AM 82 comments: