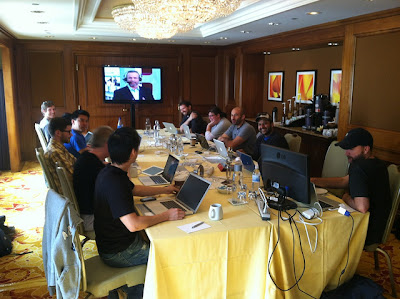 There they were, sitting in a San Francisco conference room sipping hotel coffee and waiting to curate your tweets. Sunday marked the first partnership between NASCAR and social media company Twitter. The group pictured here was the Twitter task force assembled to handle the project.

Simply put, Twitter created a page where anyone searching #NASCAR on Sunday was sent. Rather than seeing a list of relevant tweets as usual, those searching were redirected to a "landing page" where the group above coordinated the content. While not exactly a social media hijacking, it certainly was a redirecting of content for a purpose. So, what was the purpose?

During the race, Twitter aired a series of seven TV commercials promoting the partnership. Each 15 second commercial spot reinforced the direct link between NASCAR and the social media company. What the ads effectively did was specifically promote the newly designated hashtag (landing) page.

"The spots that aired on Sunday seem designed to show advertisers that hashtags can potentially be a useful branding tool and not merely a pop-culture phenomenon," said Cotton Delo in Ad Age. "It's further evidence of Twitter's desire to be the platform advertisers turn to when they're looking to execute promotions around major live events such as the Super Bowl or the Oscars."

The keyword from the quote above is advertisers. During the live race, sponsored tweets appeared on the hashtag page for ticket sales to NASCAR races. Sponsored tweets are Twitter's form of advertising. So when NASCAR indicates that the organization has a partnership with Twitter, the bottom line is that NASCAR can use the social media service for various advertising purposes.

"Twitter wants to be the destination for users who wish to engage with a certain brand," writes Ryan Lawler at TechCrunch. "That’s what’s so brilliant about #NASCAR and what we can only assume will be future hashtag landing pages. The brands themselves don’t have to actually create anything new. Because at the end of the day, there’s nothing better than getting your biggest fans to promote your brand for you."

In other words, what NASCAR did was encourage teams, sponsors and others (including media members) to create content on Sunday aimed specifically at the landing page. It didn't cost NASCAR a penny to produce and the attraction of being included on the hashtag page had the tweets flying.

Ultimately, the only remaining issue on the table is whether or not money is changing hands between NASCAR and Twitter for this project. While that information is not public, this excerpt from the Ad Age article may tell the tale.

"Twitter declined to comment on how much it's charging for event (hashtag) pages," said Delo. "But precedent suggests that they'll be available to major advertising partners at the outset. Its roll-out of brand pages last year was reportedly for marketers who had committed to spend a minimum of $2 million on Twitter's suite of ad products, such as promoted tweets."

There you have it. An interesting social media project with all kinds of twists along the way. Twitter looking for revenue, NASCAR looking for exposure and fans reading "curated" content from guys in black t-shirts. At lease we hope the coffee was hot.

We invite your opinion on this topic. Coments may be moderated prior to posting. Thanks for taking the time to stop by The Daly Planet.
Posted by Daly Planet Editor at 12:47 AM 30 comments: 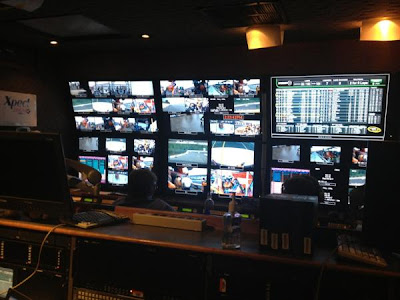 Things were busy in the TNT production truck as the network returned to NASCAR coverage at Pocono.

Adam Alexander hosted the pre-race show with Kyle Petty and Larry McReynolds. TNT made a decision not to hire a host to replace Lindsay Czarniak, who departed for ESPN SportsCenter duties after last season.

The plus side is TNT spent less money, but the downside will come when there is a rain delay or long red flag. The only person remaining in the infield is Larry McReynolds standing by his cut-a-way car. As these six races roll by we may see a TV veteran like Ralph Sheheen moved from pit road to the infield host position if something like this happens. Luckily, the weather was great and there were no long delays.

The one hour pre-race show featured a segment with Jimmie Johnson, Bill Elliott and Ned Jarrett talking about NASCAR topics. Rather than just one interviewer, there were several TNT folks involved. It took time away from Elliott and Jarrett, two personalities who are not heard from much on the TV side.

Needless to say, there was an ill-timed and pre-recorded promo for the Lizard Lick Towing TV series that airs on Turner sister network TruTV. This scripted reality show exists on the deception that any of the content or characters are real. TNT executives call it "actuality TV."

Alexander was paired again this season with Petty and Wally Dallenbach Jr. in the booth. It's a crew that likes to offer opinion, but is sometimes slow to jump on activity or incidents on the track. All three seem to sometimes be looking at the TV monitor and not "out the window."

Chris Neville returned as a pit road reporter along with veterans Ralph Sheheen, Matt Yocum and Marty Snider. TNT uses pit reporters much more than FOX and that was certainly true in this telecast. There was a little delay in explaining the early speeding penalties, but finally Sheheen went to the NASCAR hauler and got a map of the new timing lines.

TNT produces a wider race and keeps a broader perspective than FOX. The tone in the booth focuses on the race and there are few personal stories from Petty. McReynolds was actively involved throughout the telecast and continued his best role as a strategist.

A series of late cautions allowed some drama to build, but TNT strangely chose to play a dated Denny Hamlin soundbite with only seven laps to go and the race under green. Alexander should have been calling the play by play and building the drama. The final laps looked great, but lacked the excitement that Alexander should have been providing. This race ended with a thud from the announcers.

TNT also offers the RaceBuddy application online and does an extended post-race online at the NASCAR.com website. There are no side by side commercials until the Daytona race and the Wide Open coverage. There were no technical problems.

We invite your comments on the TNT coverage of the Sprint Cup Series from Pocono. Thank you for taking the time to stop by The Daly Planet.
Posted by Daly Planet Editor at 12:30 AM 65 comments: