Update: The Island Of Brian France 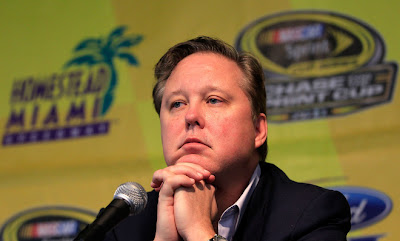 It was October of 2009 when we offered the original column on the elusive Brian France. "The Island of Brian France" can be read by clicking on the title. Please take note of the reader comments as well.

At that time, France had been poorly advised in terms of talking directly to the media. He strongly assured the media and public multiple times that sexual harassment allegations made by former NASCAR employee Mauricia Grant were completely false. They were not.

These days France is surrounded not by public relations or media professionals, but by marketing men. The shift in philosophy away from feeding the media and toward controlling it is company-wide. Marketing folks pick the agenda, control the answers and never get "off message."

Update: On July 7 in the DIS Infield Media Center, France spoke to the press corps. He said he was encouraged by the first half of the season and that the sport would never stoop to gimmicks to spice up the racing. He had no updates on a new TV contract or solutions for TV commercial issues. New technology in development included the 2013 Cup cars and "glass dashboards" for use in the future.

What France had not done was watch the Sprint Cup Series race from Kentucky Speedway on TNT. What he did not see is what his premier product has become on television. He did not see one-third of the racing covered by commercial breaks. He did not have the pleasure of watching Junior and Pop Pop wrestle over Kentucky Fried Chicken side dishes for three solid hours.

This is the island of Brian France. Informed on agendas that serve him, but seemingly oblivious to the real fan issues of the sport. In November of 2010, France was asked in another media session what he would say to fans who do not like his Chase for the Championship points system. "You met somebody who’s telling you that?" was his response to the reporter.

Last year the teams not in the Chase were excluded from ESPN's TV coverage. Unless leading the race, the non-Chasers were sentenced to ten races without TV exposure. Once again the vast majority of the field suddenly became field fillers. Regardless of the actual story of the race, the Chase coverage has skewed the final ten races into a hybrid television presentation that serves no one.

The Chase was created by France to counteract the NFL season. It was intended to draw fans away from regional NFL games because of its play-off nature. Instead, it gave fans of drivers not in the Chase a reason to watch football. How to solve the problem of making TV cover the actual races and simply update the Chase has been an issue France has continually avoided. The annual Chase hype begins with ESPN's Brickyard 400 coverage in less than two weeks.

Social media has been embraced by NASCAR and promoted as a wonderful information platform for fans. Now, real time text service Twitter has become both a blessing and a curse. Rich with information directly from NASCAR sources use of Twitter during live Sprint Cup Series races by fans has boomed.

The curse has come from allowing fans to see just how much race information and on-track action is actually being missed by television. Instead of being a location for fans to simply congregate, Twitter has become a digital complaint board about the sport's television woes. This is a key issue for the sport.

France faces the creation of a new NASCAR TV contract this year. This time, NASCAR owns the digital rights to all of its own product. The question is whether France is negotiating for a new package that includes NASCAR streaming races to laptops, tablets and smart phones. The lack of easily available online content has been one of the most significant NASCAR issues of the last decade.

The last media availability of the NASCAR chairman in January was quite structured. The issues he never addressed were significant. He covered fuel injection, the wild cards in the Chase and suggested the sport had momentum. Those were the highlights. Here is the reality.

Any human being who tried to watch the Kentucky Speedway race on TNT knows what the sport has is trouble. Any fan who followed NASCAR's advice and got on Twitter can see the problems. What the sport needs is fixing. If ESPN walks in with full-screen commercials, endless Chase hype and focuses on twelve teams only, the result is not going to be pretty when the NFL season starts.

We invite your comments on this topic. Thank you for taking the time to stop by The Daly Planet.
Posted by Daly Planet Editor at 12:30 AM 55 comments:

Just when you thought it could not get any stranger, Go Daddy has offered a preview of the new TV commercials about to run in the upcoming Olympics. Before you ask, yes that is an otter.

Last we left the company, former CEO and Danica Patrick fan Bob Parsons had been moved upstairs after selling Go Daddy to a group of investors. A man named Warren Adelman had been named CEO and quickly began dropping hints that his agenda was to change the public perception of the company.

The first step was to switch advertising agencies. Deutsch New York was chosen to create a new series of TV commercials that were going to air during the London Olympics. The twist is that Deutsch is run by a very powerful woman named Val DiFebo.

She was asked by the New York Times about the many years of Go Daddy's risque and sexually provocative advertising campaigns. "As a woman, is it my favorite work?” she asked rhetorically, then replied, “No.” That was not a good sign for Patrick and her female team of Go Daddy girls.

When asked about the new campaign, DiFebo suggested a change of course. "The ads will tell more of a story about GoDaddy’s technology rather than entice consumers with appeals like to see more skin, click here,'" she added.

Well, the Olympics are around the corner and a preview of the ads has just been released. True to her word, DiFebo takes a nice big swipe at the Go Daddy girls while sending the message that the company is ultimately about technology and service. How this is done is an eye-opener.

Click here for Danica Patrick's tasteless "beaver" commercial that was part of the advertising campaign surrounding the 2008 Super Bowl. This commercial was supposedly rejected by TV and could only be seen at the Go Daddy website. Of course, the entire thing was a marketing effort to direct TV viewers online.

Click here for the first of the three new Olympic ads. "Charlene" represents the Go Daddy girls but without a company logo or even body paint. The line is "Charlene is how Go Daddy attracts domain name customers." The new character of Karl represents the part of the company never before mentioned. He keeps the customers.

Halfway through the ad, Charlene is said to have forced three state senators into early retirement while she stands on-camera petting her otter. Go Daddy was infamous for putting Parsons' contempt of the Federal Government on display in ads ranging from the "Enhancement Panel" to the classic "Broadcast Censorship Hearings."

Click here to see the original 2005 Super Bowl ad where the C-SPAN logo was changed to G-SPIN.

So what exactly is the point of these new ads and spending millions to run them in the Olympics? Gone are the familiar "Go Daddy Girl" faces the company worked so hard to develop. Gone is the teenage sexual innuendo. Instead, a generic sexy girl with an otter and a reputation is upstaged by a nerd named Karl.

"I felt it would be disingenuous not to acknowledge our past and do it in a tongue-in-cheek way, but really point to the future," Go Daddy CEO Adelman told the Huffington Post on Monday. This may be the strongest statement yet that what Adelman and DiFebo have in mind does not involve the Go Daddy Girls.

Patrick is finishing a full-time season in the Nationwide Series while running a limited schedule in the Sprint Cup Series. Her primary NASCAR sponsor is Go Daddy. Now, that company heads into the Olympics without her.

Love it or hate it, the upside in Patrick's Go Daddy TV ad exposure was that she was now firmly tied to NASCAR. Her pursuit of a win in the Nationwide Series continues, but 2013 was supposed to see her running for Rookie of the Year honors in the Sprint Cup Series with Stewart-Haas Racing. That would be huge for the entire sport.

Patrick has been coy on confirming her plans for next season in the media, but things are said to be in place. Even the Indy 500 and Coke 600 double-dip has been put on the table as possible for next year. What has yet to unfold is just how she fits into the company's advertising future as Adelman shifts the Go Daddy emphasis from sex to technology.

Click here to see the current Go Daddy homepage. The company's IndyCar driver James HinchCliffe continues to be featured as a result of the most recently completed ad campaign. Patrick is nowhere to be found.

We welcome your opinion on this topic. Comments may be moderated prior to posting.
Posted by Daly Planet Editor at 12:00 AM 15 comments: