What We Have Here Is A Failure To Communicate 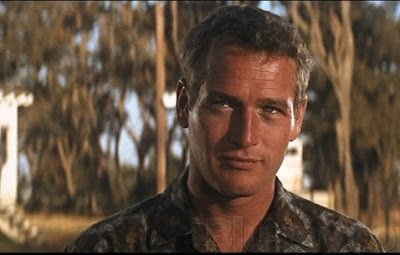 It was 1967 when the Captain at the prison farm had just about enough of Cool Hand Luke's antics. Between eating 50 hard boiled eggs in an hour on a bet to hustling through a black-topping job to have the rest of the afternoon off, it was clear that the man pictured above was bucking the system.

After an ill-fated escape attempt, the Captain uttered the now famous movie line that has come to define a fundamental difference in understanding.

Earlier this week, I had an opportunity to speak with a Twitter executive by phone. In a pleasant conversation we discussed the new #NASCAR hashtag features coming to Twitter this weekend. My questions were fundamental and his answers made a lot of sense. Click here to read the column that followed.

Thursday the new #NASCAR hashtag "landing page" was rolled out by Twitter as a preview of the weekend's new project. This page is where NASCAR and the media are pointing both users and non-users of Twitter for Sunday's race.

What was relayed to me was that the "landing page" would continue to carry #NASCAR fan tweets and be embellished with additional content from Twitter's own socia media producer. Thursday the stream was simply a restricted flow of tweets from NASCAR personalities, sponsors and media members.

What was also confirmed to me in the phone interview was that this new page would contain no advertising. Thursday afternoon a "promoted tweet" was featured at the very top of the page. From Ebay Motors to Dove Care for Men, there was a consistent advertising presence coordinated by Twitter as the very first item any user would see with every view.

Sprinkled throughout the #NASCAR stream during the day were seemingly random references to Twitter as a marketing tool. Each of these tweets somehow ended with the identical hashtag of #Twitter4brands. One click on that opened a coordinated Twitter marketing stream and yet another "promoted tweet." Twitter was placing the #Twitter4brands content in the new #NASCAR stream.

One of the aspects of Twitter that makes it so appealing for fans like me is the ability to use it quickly on a smart phone. In addition to my own timeline, the ability to search the #NASCAR hashtag has become the quickest way to broaden my information on the sport in a flash.

Thursday, the Twitter mobile app on my android phone redirected the #NASCAR hashtag search to the controlled stream. That was not in the original discussion and did not result in the information I desired.

Finally, the interesting point of the new and controlled #NASCAR hashtag stream was not the content that was included, but the content that was excluded. After a colorful night at the Prelude PPV telecast, there were plenty of fans talking about topics that did not include Pocono racing or the new hashtag project.

In my phone conversation, it was made clear that fan tweets on NASCAR hot topics being discussed would be included in the new coordinated stream. Nothing could be further from what was presented.

Click here to read the latest NASCAR media release on this project. Here is an excerpt:

Twitter.com/#NASCAR showcases the best Tweets and photos from NASCAR insiders in an effort to bring the behind-the-scenes story to life for fans during race weekends. The page includes Tweets from drivers, pit crew members, families, media, NASCAR representatives and other industry constituencies like race tracks and sponsors.

Fans also have an opportunity to see their Tweets featured.

Using a combination of sophisticated algorithmic signals and Twitter's editorial curation, Twitter.com/#NASCAR features the highest quality, most engaging content about the race and NASCAR. Behind-the-scenes photos, exclusive content and innovative and original Tweets will likely have the best chance of being featured on this new live event page.

It's important to remember that individual timelines are unaffected, that Twitter still makes the raw #NASCAR search available and that users like me are getting this service for free. But that is not the issue on the table.

It just seems ironic that the one element elminated from this new content stream on Thursday was the fans. After hearing the theory and now seeing the reality, it really does seem that what we have here is a failure to communicate.

If you are a Twitter user and have an opinion on this topic, we would like to hear it. Comments may be moderate prior to posting.
Posted by Daly Planet Editor at 7:00 AM 25 comments: