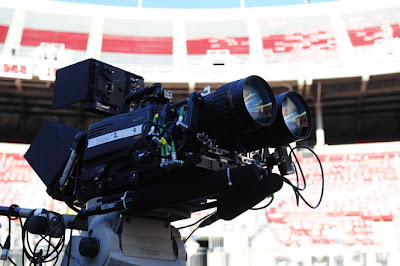 We have been talking about the rapidly expanding appeal of 3D to the sports television marketplace. Until today, the NASCAR TV partners denied any plans to use 3D technology this season. Well, the folks at Turner have changed all that.

Here is a portion of the release from Turner, NASCAR and the NASCAR Media Group:

The 3D production, NASCAR’s first ever, will be made available through TNT RaceBuddy on NASCAR.COM (NASCAR.COM/RaceBuddy3D) as well as through DIRECTV, and will complement a special television presentation on TNT, highlighted by the network’s groundbreaking signature Wide Open format.

NASCAR.COM will feature 3D feeds for the Daytona race in addition to the mosaic of HD-quality complementary unique camera angles available on TNT RaceBuddy on NASCAR.COM (NASCAR.COM/RaceBuddy) throughout the six NASCAR Sprint Cup Series races televised on TNT.

Turner, which manages NASCAR.COM, will also make the Sprint Cup Series race from Daytona International Speedway available in 3D through DIRECTV. In order to experience the event in 3D, viewers will need a 3D TV or PC display with matching 3D glasses. Fans can go to www.nascar.com/racebuddy3D to get more information about the hardware and software used to view the 3D production online.

“One of our goals here at NASCAR is to continuously explore ways to improve the viewing experience for our fans,” said Jay Abraham, chief operating officer of NASCAR Media Group. “Offering the Coke Zero 400 in 3D on NASCAR.COM and select television distributors is a great example of that consistent exploration. Our fans have been asking us about 3D for several months so we’re excited to deliver that to them for the first time ever in what will likely change how NASCAR is consumed moving forward.”

The 3D production on NASCAR.COM and DIRECTV will feature two custom racing feeds produced specifically for 3D. The first will provide a unique look at the racing action from strategically placed cameras around the track designed to maximize the effect of 3D. The second stream will bring the mayhem of pit row into the third dimension creating a one-of-a-kind visual experience.

Well, that is an interesting first step into the world of 3DTV for NASCAR. There will be much more information coming along and we will update this page when it does. In the meantime, get those 3D glasses for Daytona!

We welcome your comments on this topic. To add your opinion, just click on the comments button below. This is a family-friendly website, please keep that in mind when posting. Thanks for taking the time to stop by.
Posted by Daly Planet Editor at 11:54 AM 32 comments:

Your Turn: Sprint Cup Series From Sonoma On TNT 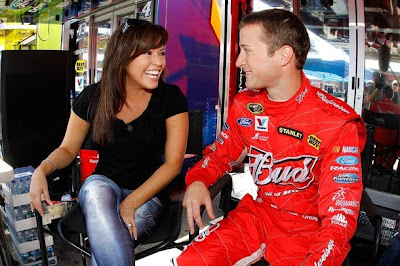 We knew it was going to be interesting and it was. The TNT telecasts from Sonoma used to be boring disasters when anchored by Bill Weber. Sunday, it was Adam Alexander's turn at anchoring this road course race.

Lindsay Czarniak anchored the Countdown to Green pre-race show. She was joined by Kyle Petty and Larry McReynolds. Jimmie Johnson was the live infield guest. Parnelli Jones was profiled on Pride of NASCAR. Wally's World offered a course description.

Several DISH customers reported a lip sync problem during the pre-race. This means that the audio being heard by viewers did not match the video.

The weather was good, the pictures were outstanding and the telecast was accompanied by RaceBuddy. The online companion worked well, providing four camera angles and a pit reporter to computer users.

Alexander had his hands full with Kyle Petty and Wally Dallenbach Jr. in the TV booth. Both of them were more talkative than ever as the rough road course action unfolded. Dallenbach has a long road racing resume and this was perhaps his opportunity in this package of six races to take the lead analyst role.

The race featured rough driving, hot tempers and even a red flag period. It was perhaps not exactly the best showcase for the talent of the Cup drivers.

We welcome your comments on the TNT coverage. To add your opinion, just click on the comments button below. This is a family-friendly website, please keep that in mind when posting. Thanks for taking the time to stop by.
Posted by Daly Planet Editor at 8:00 AM 52 comments: