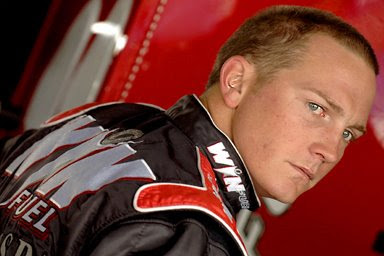 The nationally syndicated TV series Three Wide Life has been undergoing some major renovations. Just like many NASCAR teams outside of The Chase, the producers of this TV show are making changes now with an eye for 2009. One of those changes is the addition of Shane Hmiel to the line-up.

Producer Parker Williams has reached-out to Hmiel, who is currently driving Sprints, Midgets and Silver Crown cars in various series with a new outlook on life. Click here for an article by SI's Tim Tuttle on how Hmiel got his life together.

NASCAR used to have many national and regional TV series that served different purposes and aired across various areas of the country. Since the time that NASCAR consolidated its race footage and TV production, those shows have faded from the landscape.

Three Wide Life is an effort by an independent group to concentrate on interviews and conversation with NASCAR personalities. They are looking for the kind of behind-the-scenes perspective that cannot be conveyed on shows like RaceDay and NASCAR Now.

Three Wide Life has also added local Charlotte writer and reporter Brittney Cason as the new host. Originally, the current "Miss Sprint" Monica Palumbo was being considered for this role but things did not work with her current employer. Cason is a graduate of Virginia Tech and has been working on a variety of media-related projects in the Charlotte area over the past several years.

While Cason will be hosting the show, Hmiel will be featured in a very different way. As the Producer, Williams made contact with Hmiel to get his perspective on the current NASCAR scene. What he found was a clean and sober Hmiel happy to participate.

In the first new episode airing this week across the nation, Hmiel speaks-up about what he has been doing and how his new life is going. Viewers will be able to send email questions to Hmiel and he will be answering them on each episode. It should be interesting to hear Hmiel's point of view on topics ranging from Kyle Busch to The Chase. Hmiel is a person who has literally grown-up in NASCAR because of his father, Steve.

Cason will host this episode from the Richard Petty Driving Experience over at Lowe's Motor Speedway. Her feature interview is with Rick Wren, who is Ron Hornaday's crew chief in the Craftsman Truck Series. Excellent selection. There will also be a segment with Brit Goodrich from Penske Racing who talks about his pit crew role with Talladega on the horizon.

DirecTV and radio reporter Tony Rizzuti will also appear in the show with a segment called Tech Zone. Rizzuti will be speaking with veteran engine builder Keith Dorton. Topics should range from Dorton's experience with both NASCAR and the Hooters Pro Cup Series to shared memories of his late brother Randy.

To top it all off, Cason visits with IRL driver Graham Rahal, the youngest winner in IRL history. Bobby's son shares his thoughts on the current state of the unified IRL and racing in general.

This is an ambitious agenda for the re-vamped show. Since there are almost no independent TV series covering NASCAR in the marketplace today, it should be interesting to see just how Three Wide Life does over the next several months.

Click here for the Three Wide Life website that has details on where the show airs across the country.

The Daly Planet welcomes comments from readers. Simply click on the COMMENTS button below and follow the easy instructions. The rules for posting are located on the right side of the main page. Thanks for taking the time to stop by.
Posted by Daly Planet Editor at 3:00 PM 29 comments: 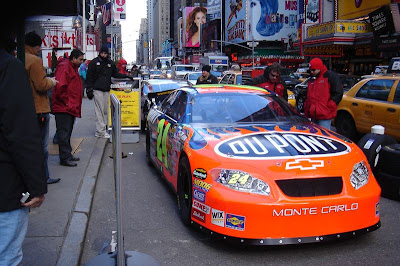 A while back, NASCAR packed-up all twelve of The Chase drivers and shipped them off to New York City. This "media tour" was aimed at putting these personalities in front of a national television audience.

The guys did the mandatory "Top Ten" list on David Letterman. The next day, they headed to The Early Show on CBS and Good Morning America over on ABC. One place they did not visit was The Today Show on NBC. There was no interest in NASCAR at 30 Rock.

NBC left NASCAR under difficult circumstances. Fans do have great memories of Allen Bestwick and the late Benny Parsons covering the sport's top series. They also have the words of Brian France ringing in their ears. In NBC's final season, France blamed lower TV ratings on the fact NBC was busy promoting its NFL agenda.

Clearly the strangest thing that happened during 2006 was the attempt by Dateline NBC to stage an elaborate sting operation during the Sprint Cup Series race in Martinsville, VA. Click here for the story from NASCAR.com editor Duane Cross about the set-up. Click here for the reaction from the law enforcement community.

This little stunt of having "rent-a-Muslims" spread prayer rugs and kneel to pray next to the Martinsville Speedway ticket office not only got no reaction from the fans but also offended Muslims nationwide.

Many NASCAR fans wrote to NBC and suggested if they wanted to start fights they could save money and simply put a Dateline reporter in a Jeff Gordon T-shirt.

It certainly seems more than a bit ironic that Gordon is being promoted for an appearance on NBC's Today Show on Thursday morning. While this same program was apparently not interested in visiting with Chase drivers like Dale Earnhardt Jr. and Tony Stewart, they are rolling-out the red carpet for Gordon and his Sprint Cup Series car. Want to know the reason why?

NASCAR fans have seen Gordon on TV run all kinds of paint schemes and wear all kinds of firesuits. Nicorette and Pepsi come to mind as two that are probably the most familiar. So, what Gordon is really changing is his DuPont paint scheme. Same sponsor, just different colors. That gets live coverage on The Today Show.

Over the years, Gordon has got to tool his Chevrolet through Times Square during the annual NASCAR parade before the Sprint Cup Series banquet. This one little publicity stunt tied-up traffic and was such a logistical mess that this season NASCAR has quietly cancelled it.

So, look for a COT with a tarp on it outside of Rockefeller Center on Thursday morning surrounded by some of New York's finest. Perhaps, as Gordon removes the cover and lets America see his new 2009 paint scheme he might mention a couple of topics other than DuPont and Hendrick Motorsports.

Suggestions might include Talladega on Sunday and The Chase for the Championship. That is, once all the important business is out of the way.

Update: Gordon will also appear on ESPN2's First Take after 10AM on Thursday to promote his new paint scheme.

The Daly Planet welcomes comments from readers. Just click on the COMMENTS button below and follow the easy instructions. The rules for posting are located on the right side of the main page. Thanks for taking the time to stop by.
Posted by Daly Planet Editor at 1:12 PM 54 comments:

Rusty Out And Petty In At ESPN? (Updated - Rusty Says No) 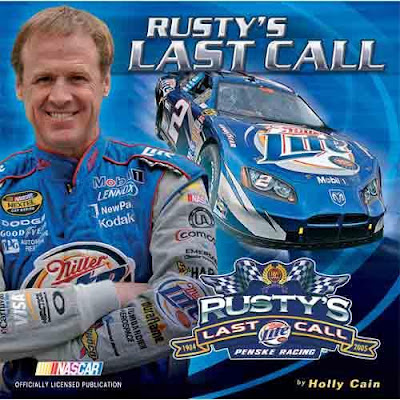 Leave it to little brother Kenny Wallace to get things stirred-up just a couple of days before Talladega. Click here for the article over at SPEEDtv.com that has the email flying.

Kenny is stepping-in this weekend at Talladega for Michael Waltrip Racing to pilot the 00 car and brought-up a rumor that he was talking with the MWR guys about. The way it breaks down is pretty simple, Rusty Wallace wants to race again.

After seeing past champions like Terry Labonte and Bill Elliott earn hefty paychecks simply for showing-up and getting a car into the field, one can understand where Rusty is coming from. The point that Kenny makes is that Rusty's desire is deeper and he is looking at guys like Brett Farve and Mark Martin.

Both of these athletes have retired and un-retired several times and it seems that each time they returned the competitive fire still burned. When Rusty agreed to join ESPN, it was in the high-profile Lead Analyst position. After one season, the network moved Rusty down to the Infield Pit Studio, where he still works today.

While Rusty does get to fill-in as an analyst on some Nationwide Series races, the experience of watching every race locked in an elevated box with Allen Bestwick and Brad Daugherty for four hours is perhaps not exactly what he had in mind for his TV career.

Let's talk about some TV and racing scenarios. If Wallace left after Talladega to fill a seat in the Cup Series, he would probably be doing it for a struggling team or one where the driver has already announced he was leaving. That situation opens up all kinds of possibilities from DEI to his old Penske Racing team.

It seems a strange coincidence that only last weekend in Kansas did the news leak out that Kyle Petty was going to be out at Petty Racing for the rest of the season. Petty already travels to the races for SPEED to appear on the Tradin' Paint show and his work last season as an analyst for TNT drew rave reviews.

If Wallace decided to make a move next week, Petty would be high on the very short list of personalities who could step right into that TV role. He knows the COT, knows the struggles of the teams this season and has been on the track with The Chase contenders.

Should Wallace decided to step away from ESPN during the off-season, that would present an interesting challenge. ESPN covers the entire Nationwide Series and the final seventeen Sprint Cup races. Petty only works on the small six race TNT summer package which would not interfere with either ESPN issue.

The best part for ESPN is that they would have someone who could appear on any show from SportsCenter to First Take without the baggage of ownership that Ray Evernham must carry. Petty would be a resource that ESPN could use "across the multi-platform media outlets." I'm serious, that's actually how they talk about the ESPN TV, radio and Internet businesses.

Update: Here is the Wednesday statement distributed by Rusty's son Greg Wallace on behalf of Rusty. ""I love Kenny to death; he's been trying to get me back in a car ever since I retired after 2005," the statement said. "While any rumors like this are certainly flattering, they're untrue. I have a long-term commitment to ABC and ESPN and I really love what I'm doing right now."

This column will be updated if any other media links or information appears on this topic. It certainly is an interesting scenario to ponder for ESPN. Rusty goes back to driving and Kyle leaves driving for the TV world. What are your thoughts?

The Daly Planet welcomes comments from readers. Simply click on the COMMENTS button below and follow the easy instructions. The rules for posting are located on the right side of the main page. Thanks again for taking the time to stop by.
Posted by Daly Planet Editor at 10:08 AM 25 comments: