What Can Terrell Owens Tell Us About NASCAR And ESPN? 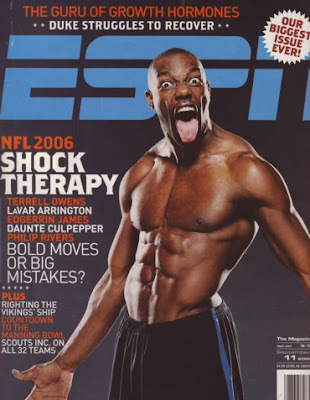 The drama that played-out on the ESPN family of TV networks and across the Internet over the last two weeks was perhaps familiar to some folks. Those would be NASCAR fans.

ESPN veteran journalist Ed Werder first reported (click here) that there was trouble in the Dallas Cowboys locker room. The center of the trouble was the always interesting wide receiver for the team who is pictured above. His name is Terrell Owens.

Unfortunately, Werder decided that his story was to be supported only by anonymous sources within the very locker room where Owens had taken up residence with his Cowboy teammates. That did not sit well (click here) with some folks.

This drew a line in the sand between those that (click here) agreed with Werder's accusations and those that believed (click here) ESPN had simply created the entire story.

There is an interesting video (click here) where several Cowboys fans actually confront Mr. Werder while he is trying to work and generally express to him the feeling that without credible sources it appears ESPN is once again catching "the hype train."

This past NASCAR season, TDP has gone at it with ESPN over several issues that appear to be strikingly familiar. David Newton was once again (click here) using anonymous sources to "report" stories before the rest of the professional NASCAR media types were ready to publish the same material.

Incredibly, ESPN actually went ahead with Newton's story despite direct claims from the actual parties concerned (click here) that Newton was not telling the truth. In other words, even the folks in the story were angry at both the reporter and the TV network.

Then, from out of nowhere, ESPN launched a well-planned assault on Truck Series driver Ron Hornaday Jr. with allegations of (click here) steroid use for performance enhancement.

This company-wide "project" (click here) took months to plan and involved hundreds of ESPN employees who work for the various TV networks, the ESPN.com Internet site and ESPN's high-profile sports news division. It was timed to coincide with the first Chase for the Championship Sprint Cup Series race weekend.

In much the same way that Werder created an NFL story that was red-hot for a short while, ultimately demanded a response from the principals and then (click here) fizzled like a snowman in the sunshine, NASCAR fans remember the same type of hype during the 2008 season.

This (click here) is the final TDP story about David Newton and Ryan Newman. We also have (click here) the spectacular flame-out of the Ron Hornaday steroid scandal.

NASCAR fans were left with the same puzzling look on their faces that now adorns those of many Cowboy fans. The questions are the same. What was that really all about? Why did ESPN choose to go forward with it? Was this whole thing a ploy to generate money and exposure for ESPN?

At the end of the day, ESPN moved-on and the 24-hour TV machine continued to grind. Left in the wake of this type of hit-and-smear journalism are the real lives of those who have been singled-out for attack. This is (click here) a good example of the aftermath.

Athletes like Ryan Newman, Terrell Owens, Ron Hornaday Jr. and others were simply used to create "content" that spread the ESPN brand and directly generated revenue for the company.

NASCAR is about to go through the roughest January in many years. The countdown to the Daytona 500 and the beginning of the new season can be greatly influenced by the media coverage from The Worldwide Leader in Sports.

The question is whether fans and TV viewers will see hardcore NASCAR reporters like Marty Smith, "hype kings" like Newton or electronic assassins like Shaun "Mr. Steroids" Assael in 2009?

Which of the many faces of ESPN will be looking at NASCAR as it struggles to survive?

Where do you come down on the issue of how ESPN's news reporters have treated NASCAR over the last two years? As a fan, has this helped or hurt your attitude where NASCAR is concerned?

Thanks for taking the time to leave us a comment. Just click on the COMMENTS button below and follow the easy instructions. We do not want your email address and there is nothing to join. We just want your opinion on this issue.

The rules for posting are located on the right side of the main page, thanks for taking the time to stop by The Daly Planet during the off-season.
Posted by Daly Planet Editor at 12:37 PM 33 comments: