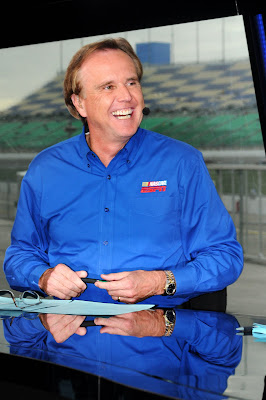 The entire day of action from Chicagoland Speedway has been on SPEED. At 7:30PM, NASCAR fans have to change to ESPN for the live Nationwide Series coverage.

It's Allen Bestwick back in the Infield Media Center with Rusty Wallace and Brad Daugherty. Up in the TV booth is Marty Reid, Dale Jarrett and Andy Petree. Down on pit road are Dr. Jerry Punch, Jamie Little, Dave Burns and Vince Welch.

ESPN has the "A team" together this week as this is the final rehearsal before ESPN takes over the Sprint Cup Series coverage at the Brickyard in two weeks. It should be fun to watch this newly revamped line-up work together as a unit. It will absolutely serve as a good preview of what ESPN will offer Cup fans this season.

Chicagoland is not the most exciting track, but the Nationwide Series race is shorter and there are a lot of conflicting agendas on the track. Cross-over Sprint Cup drivers are there for fun while Nationwide Series regulars continue to try and squeak out a living with a good result. No need to comment on the "start and park" wars going on at the rear of the field.

Chicagoland makes good pictures and the high speeds are even more powerful when the director uses the low angle cameras live as the cars are running under green. The facility has an outstanding pit road, which should make for solid pit stop coverage.

Reid is the new face of ESPN's NASCAR Sprint Cup coverage. He replaces Punch after three years of his work in the play by play position. Bestwick and Reid have been clicking this season to add the kind of excitement and insight to the telecasts that Punch simply could not provide.

Credit goes to ESPN for rolling out this new line-up on the Nationwide Series races this season and letting everyone settle into their new roles. Perhaps the most impressive comeback is Punch, who has been fantastic on pit road. This new combo could be just what ESPN and NASCAR need down the stretch.

This post will serve to host your comments on the ESPN coverage of the Nationwide Series race from Chicagoland. To add your TV-related comments, just click on the comments button below. This is a family-friendly website, please keep that in mind when posting. Thanks for taking the time to stop by!
Posted by Daly Planet Editor at 7:04 PM 181 comments:

The Thirteen Hours Of Chicagoland 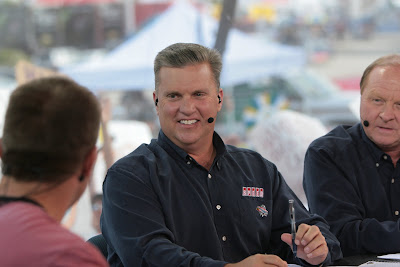 Friday is jammed with NASCAR TV programming from 11AM to midnight Eastern Time. Three different TV production teams and twenty-five on-air talent will combine on two networks for thirteen hours of programming.

The ironman on this Friday is going to be SPEED's Steve Byrnes. He took some time off from his new role hosting Race Hub to get things organized for his Chicagoland marathon. Ready for the breakdown?

At 11AM, Byrnes starts the day with Nationwide Series practice. Alongside are the other ironmen of NASCAR TV in Larry McReynolds and Jeff Hammond. These three are tops in terms of practice and qualifying commentary.

Byrnes gets a coffee break next as the relief team of TNT's Adam Alexander, Wally Dallenbach Jr. and Kyle Petty stops by to host the first Sprint Cup Series practice. This is the last 2010 practice session for this crew and they have done a good job. Alexander has been a solid presence in his first try at TV play-by-play on the Sprint Cup Series level.

The TV buzz this week was created by comments about Mark Martin from SPEED and Showtime's Randy Pemberton. He returns at 2PM with NASCAR Live on SPEED. John Roberts hosts and he may well turn Pemberton loose for more silly season talk.

This is also Darrell Waltrip's last scheduled NASCAR TV weekend this season. He joins Byrnes and Jeff Hammond in the booth for final Cup practice at 3PM. There has been a running joke on this coverage as Waltrip's presence moved McReynolds to the role of garage area reporter. It has proven to be both a memorable and humorous experience.

At 4PM Waltrip gets a break, but Byrnes does not. He hosts Nationwide Series qualifying with Hammond and McReynolds. Once "ole DW" finishes his Mountain Dew, he returns to team with Byrnes and McReynolds on Sprint Cup Series qualifying. This time, Hammond takes a walk to pit road and asks the pit reporter questions.

When Allen Bestwick, Marty Reid and Dr. Jerry Punch finally take over at 7:30PM for live coverage of the Nationwide Series race one might think Byrnes was done. Not the case at all. There is still one hour of Trackside to host at 11PM with guests driver Kevin Conway and former crew chief Dale Inman.

Once the clock rolls around to midnight, Byrnes will finally be able to call it a night. Lots of laps will be under his belt and with an hour talk show to top off the night, Byrnes will certainly have earned every cent he is being paid.

We will use this page to host your comments on the Friday TV right up until the Nationwide Series race. We will live blog that event as always on a new post.

To add your TV-related comments, just click on the comments button below. This is a family-friendly website, please keep that in mind when posting. Thanks for taking the time to stop by The Daly Planet.
Posted by Daly Planet Editor at 8:00 AM 21 comments: