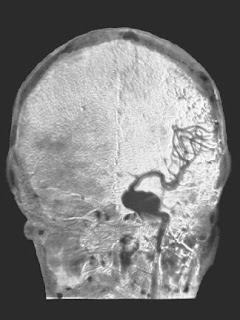 Please sit down before reading this column. I do not want to be personally responsible for injuries sustained when you collapse either from laughter, or as I believe happened to me, a small explosion at the back of my brain.

Here is the opening line from Thursday's NASCAR Now program on ESPN2. Please be seated and plant both feet firmly on the floor. Here we go.

This is the part where the the internal bleeding began. Here is why it continued.

For those of you who need a moment to recover, it will be short-lived.

"This was most evident at The Glen when Jeff Gordon spun-out with two laps to go. The message was quite clear, second place is just the first loser" continued Kuselias. The show then played a sound bite from Carl Edwards who said about The Glen "I just didn't want to finish second." That is all he said...literally.

Then, the new ESPN conspiracy theory took full flight. "But it wasn't just Watkins Glen...it seems that once NASCAR announced its new rules, there was a new focus on winning" Kuselias added. As he spoke, ESPN played video of the finishes of Atlanta, Martinsville, and believe it or not, The Daytona 500.

Poor Boris Said must think he is in a meat grinder some days in his role as an analyst for NASCAR Now. This was going to be one of those days. Kuselias had now set-up his conspiracy that Gordon spun trying for the "bonus points" available in The Chase format. He pointed to this being a problem, and then brought on Boris.

"What do you think of the new system that puts more emphasis on winning races?" asked Kuselias. "I think its awesome" exclaimed Said. Meanwhile, the graphic at the bottom of the screen actually read "added pressure of racing for bonus points." This is apparently what Said was supposed to be talking about, but he did not get the memo.

Boris indicated that the drivers pretty clearly in The Chase can be more aggressive than those still racing for the top twelve. He never even referenced any kind of bonus points. He basically said they can let it all hang-out, and the others cannot. This did not go over well with the host after all this work on the latest ESPN NASCAR conspiracy theory. He gave it one last shot.

"Is there any down-side to the new Chase format?" asked Kuselias. In typical Boris style he said "no, not at all." As Kuselias slithered away to commercial, the bottom of the screen still read "added pressure of racing for bonus points."

So, we had just watched the national TV host of ESPN's NASCAR show try to convince the TV audience that Jeff Gordon spun at The Glen because of The Chase format. Perhaps, when Gordon himself came on and said the points did not matter and he had just pushed too hard, ESPN might have gotten a clue to this issue.

Let me tell you what ESPN was doing with all this garbage. Normally, they would be hyping qualifying and who had to get in on speed, who was on the bubble in The Chase, and who were the contenders for the pole. But this week, something had fundamentally changed. SPEED Channel was covering qualifying because of schedule conflicts at ESPN.

NASCAR Now's response to this was to eliminate any mention, in any way, of the live practice and qualifying telecasts. In this show, they only promoted the Busch and NEXTEL Cup races. Even though SPEED was doing the network a favor by stepping-in and providing live coverage, ESPN decided it did not exist.

The Daly Planet has spoken often about the Disney influence at ESPN bringing a sense of entitlement to the staff. If it is not on "our network" it does not exist. Such is the case for Michigan practice and qualifying, which ESPN would normally be doing. They are not doing it, so it does not exist...period.

Well, what would the national NASCAR TV show do on a Thursday when they were trying to avoid talking about Friday at the track? The answer is simple. Bring live on the set a Busch East Series driver for an interview. Suddenly, because of SPEED, NASCAR Now discovered the East Series existed, and they needed a live interview right away.

The glazed look in Erik Kuselias eyes told the story as he had absolutely no clue as to what his Busch Series East driver was talking about. The Toyota All-Star Showdown could have been the space shuttle. After purposefully avoiding the NASCAR regional touring series like the plague, ESPN suddenly made room for a live in-studio interview on this day. What a coincidence.

The show closed with sponsored Truck Series news, the DJ Copp pit tips, and Boris doing the horrible "driver pick 'ems." But what a story the first twenty minutes had become. A Chevy meeting cancelled, The Chase causes accidents, and a Busch East driver just happened to stop-by.

Sooner or later, someone from NASCAR will actually watch this show and pick-up the phone to ESPN. When ESPN's reality does not match NASCAR's reality, there is a fundamental problem that needs to be addressed. Hopefully, before The Chase causes any more accidents. Now if only the headache would just stop.

The Daly Planet welcomes comments from readers. Simply click on the COMMENTS button below, or email editor@thedalyplanet.tv if you wish not to be published. Thanks again for taking the time to stop-by and leave your opinion.
Posted by Daly Planet Editor at 10:04 PM 40 comments:

Sometimes, its only takes simple words to get across big emotions. Wednesday night, ABC unveiled their first episode of "NASCAR in Primetime."

This one hour original show produced by ABC News, took a very different kind of approach to TV content than we have seen before. Viewer reactions were mixed, but also very emotional.

True to today's entertainment TV, the program contained almost constant music playing "under" both the voices of the participants, and the racing cars themselves. That was surprising for ABC, who normally uses "natural sound" as a key ingredient in many news-oriented shows. That element was sorely missing.

That issue is even more curious given the fact that the sound of the cars and the roar of the crowd were frequent topics of the fans interviewed on the show. While some sports just don't have a lot of good sounds as they are played, NASCAR may be at the top of the heap in terms of awesome audio being available.

Many of us are used to the glossy shows recently produced by NASCAR Images in Charlotte, NC over the last several years. This company is the official TV production company of NASCAR, and also houses the tape library of racing footage.

They key ingredient that we have been fed by NASCAR Images is the sounds of the track. Cars, fans, and even jet dryers and airplanes have all been key to the high quality programs viewers have come to expect to see. ABC News took a very different approach, and that did not sit well with some viewers.

In almost documentary style, ABC took "chunks" of content and made them into segments. While it was clear that they had to walk a fine line, it was also clear that they crossed it several times in both directions.

Certainly, their selection of typical "NASCAR fans" was interesting. As well, their use of a small boy who somehow "seemed" to be speaking exactly the correct words the program needed to tie-up loose ends was curious.

Across the web, fans were screaming about ABC's choice of Juan Pablo Montoya as one of their "subjects." What most of them just don't understand is that ABC made this selection back in February, long before all the fun JPM happenings of this season unfolded. He could have been a total bomb, or had success. It turned-out to be a good call for this series.

Mark Martin and Johnny Sauter also proved to be good interviews, and fans got to know the history and racing bonds that run deep in both these families. The Mark Martin saga was well-documented in the national media, so when NASCAR in Primetime tried to hype the issue of Mark stepping-put of his car fulltime, most fans were puzzled. They already knew the answer, and had for many months. This was a pretty fundamental error, which could have been handled quite differently.

As the series progresses, it may run into some problems. I had understood that it would move around and show different drivers and teams, but the "tease" for next week seemed to clearly reflect otherwise. Fans already know what happened at Bristol to Sauter, Montoya, and the Army team. Practice was live, qualifying was live, and the race was also live on national TV.

NASCAR fans enjoy the greatest TV access to their athletes and teams of any sport in America. The success of Montoya, the frustration of Sauter, and the part-time schedule of Martin are old news. What would be nice is to see this type of documentary glimpse behind-the-scenes of different teams and drivers. This is what fans have been missing after the cancellation of several "NASCAR reality" series on the cable TV sport networks.

In the New York Times, veteran reporter Richard Sandomir writes that the series "offers nothing new about NASCAR." He questions the sudden motivation of ABC News to produce a primetime summer replacement series about NASCAR when the only thing that changed about the sport is ESPN now carries it.

Sandomir complains that the profiles of Martin and Montoya "don't emerge as sharply as they should." He also points out the lack of in-car camera footage and the relative lack of focus in tying-up loose ends. Clearly, one was when the show documented Sauter losing his "cool box" for driver air conditioning and then only followed-up on this situation during the entire Atlanta race. That would be a loose end.

As someone who watches a lot of NASCAR-related TV, this show seemed a lot like some of NASCAR Images early efforts before they evolved to the production level fans now see on Survival of the Fastest on SPEED Channel. It also evoked some of the memories of NBS 24/7 and the mysterious Beyond the Wheel, which seems to have faded from sight.

Someone at ABC News has by now probably seen the wonderful Ultimate NASCAR program series on ESPN earlier this season, and understood that this was the production level and the story quality that veteran fans have come to expect of NASCAR TV shows.

For casual TV viewers, this program might be a fun five weeks of simply seeing something they don't normally watch. ABC News captures emotion quite well, and the NASCAR gang is always plain-spoken and wearing their heart on their sleeve. Certainly, for non-NASCAR folks, the curiosity level is high and this program played right into it at full speed.

Unfortunately, for real hardcore fans episode one was simply a let-down. As Mr. Sandomir said, it "offers nothing new about NASCAR." Many fans watched because they wanted a new and exciting glimpse behind-the-scenes. What they got was lots of music, storylines they already knew, and a whole lot of fans who need Jenny Craig...badly.

The Daly Planet welcomes comments from readers. Simply click on the COMMENTS button below, or email editor@thedalyplanet.tv if you wish not to be published. Thanks again for taking the time to stop-by, and leave your opinion.
Posted by Daly Planet Editor at 6:46 PM 21 comments: