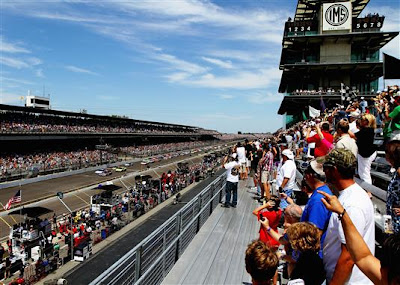 ESPN started season six of Sprint Cup Series race coverage with the Brickyard 400. The race was called several different names depending on the sponsorship deals in place.

The pre-race show featured Ray Evernham, Rusty Wallace and Brad Daugherty. Nicole Briscoe hosted from an outside terrace of the infield Pagoda. The topic of the Elliot Sadler penalty was handled less than four minutes into the telecast. The issue was completely updated and set the tone for a well-produced hour of pre-race programming.

Allen Bestwick called the race with Dale Jarrett and Andy Petree in the TV booth. Dr. Jerry Punch, Vince Welch, Dave Burns and Mike Massaro were the pit road reporters. This group is very familiar with having few racing moments to work with on this track. That was the case again on Sunday.

While the announcers relayed solid information, the familiar ESPN coverage returned. Instead of stepping back and covering the race, ESPN likes to "make TV." The network director constantly went to in-car cameras and tight shots during key restarts. This resulted in TV viewers seeing even less of the actual racing for position and that was a shame.

The toys that ESPN brings to this race were in use, including the slo-mo replay and the bat-cam on pit road. Unfortunately, with the coverage philosophy in use things got rough to watch once the field settled down after restarts. Instead of the wide coverage the network uses for IndyCars, this was once again the "telescope" world of jumping from one car to another.

A final restart with 20 laps to go had the director using in-car cameras once again and missing the final pass for second place. The announcer commentary pushed the pictures wider, but the disconnect continued until the finish line. In the final 15 laps, the cameras zoomed-in over and over again.

As we have seen for years with this coverage, only the winning car was shown finishing the race. The ESPN teams is simply imitating a move they do on the Indy 500 coverage. This series and this race have absolutely nothing to do with one IndyCar event. It's the perfect cap for this disrespectful coverage.

ESPN has all the manpower, technology and solid announcers in place. Despite the lack of fans in the stands and compelling racing, the problem with this telecast rests squarely with the producer and director. If this is once again the way the network is going to handle the Sprint Cup Series, it does not bode well for a strong stretch run.

We welcome your opinions on the ESPN coverage of the Brickyard 400. Comments may be moderated prior to posting.
Posted by Daly Planet Editor at 8:30 AM 104 comments: